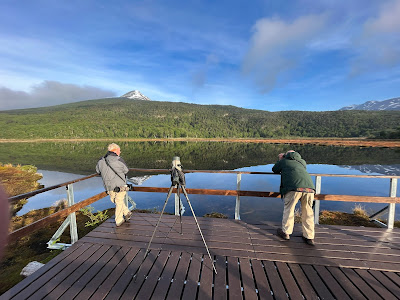 Nov 6 Our final day in Ushuaia left us with only longshot species in play. Aerolineas Argentinas had moved our departing flight up a couple hours, so we had only a half-day to work with. We knew that we wanted to owl in the park predawn, but had to choose between Garibaldi Pass for seedsnipe or the park for Spectacled Duck, Magellanic Tapaculo, and Patagonian Tyrant (all three of which are super tough here). Though we realized that the seedsnipe was the real prize, our lack of familiarity with Garibaldi plus the earlier flight made the decision for us. We will just have to return for an Antarctic cruise and prioritize the seedsnipe then! We began owling in the valley just outside the park entrance at 3:45am, and to our disappointment, the eastern sky was already beginning to glow! The spring days are really long here, which is wonderful except when you're searching for nocturnal creatures. Time was short and we had two targets: Rufous-legged Owl and Lesser Horned Owl (AKA Magellani
Post a Comment
Read more 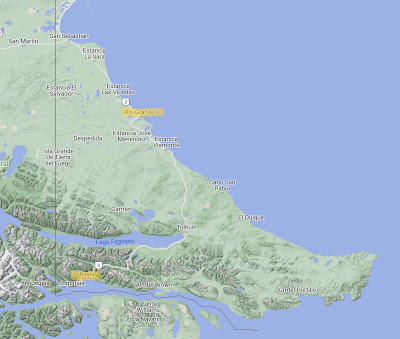 Nov 4 Road trip! Though we had an Airbnb in Ushuaia for five nights, we wanted to take an overnight to the Patagonian Steppe around the town of Rio Grande. As you can probably infer from the topo map below, the habitat there is quite different from that of Ushuaia and brings a different selection of birds to the table, including one of the most sought-after Southern Cone species of all. Departure from Ushuaia was in the pitch black, which is quite early at this latitude in November! We began in Rio Grande itself at some salinas on the west side of town in search of Magellanic Plover. We put in a focused couple hours of checking all the stony edges and mixed shorebird flocks for this odd-looking shorebird, but there was no sign of our quarry. Satisfied with our efforts, we shifted focus to other species and moved onto a cool little wetland called Laguna de Los Patos . Right away we noticed a couple MAGELLANIC SNIPE, which we later realized was a common species around town with birds dis
Post a Comment
Read more 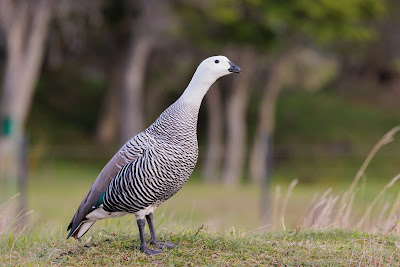 Nov 2 We were itching to begin our Tierra del Fuego birding and had no trouble getting out quickly this morning. We began with the mouth of the Rio Pipo and three lifer Chloephaga geese straight away: UPLAND, ASHY-HEADED, and KELP. There was lots more to see. We completed our steamer-duck trifecta with several FLIGHTLESS STEAMER-DUCKS nearly side-by-side with FLYING. Upland Goose To keep the unique waterfowl theme going, CRESTED DUCKS lined the sandbar, and a handful of CHILOE WIGEON were hanging by the channel. Both MAGELLANIC and BLACKISH OYSTERCATCHERS were present and vocal. AUSTRAL NEGRITOS flitted through the weeds. I was particularly distracted by a certain iconic Southern Cone species: DOLPHIN GULL. Dolphin Gull When we allowed our gazes to drift beyond the coastline and into the Beagle Channel beyond, we had our first glimpses of CHILEAN SKUA and SOUTHERN FULMAR. But we would get much better views of those later in the day. Surprisingly interesting in real life were the "
Post a Comment
Read more
More posts