Tina Green and I were able to sneak in a half-day's birding for the Stratford-Milford CBC before we decided it was time to give in to the snow. Our territory included South Bridgeport and a tiny sliver of Stratford. 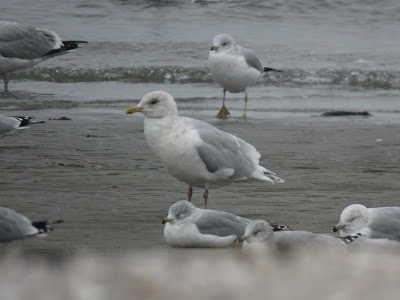 I participated in the QV CBC yesterday, with my area covering the downtown Wallingford vicinity plus a small part of the eastern, more rural, part of town. Despite a good deal of effort and scouting, yesterday was not my day. A few common species I had scouted out did not cooperate. The woods and edges were dead. Large Canada Goose flocks held nothing different. Best birds were probably American Pipit, Horned Lark, Belted Kingfisher, and Great Blue Heron. It was my dullest CBC count ever, but it was still fun to help count the birds in my newish neighborhood. Perhaps next year will be birdier here.

As far as I know, the count highlight was a nice flock of WHITE-WINGED CROSSBILLS found by Chris Loscalzo in Durham.

Next up for me: Stratford-Milford (my favorite local count).

This afternoon Rollin Tebbetts found and photographed a MOUNTAIN BLUEBIRD at Bradley International Airport in CT. I am posting his photos here for folks to see since Rollin does not have an online photo gallery. 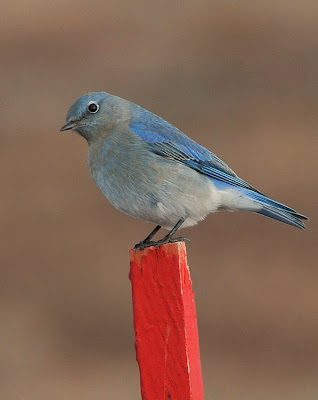 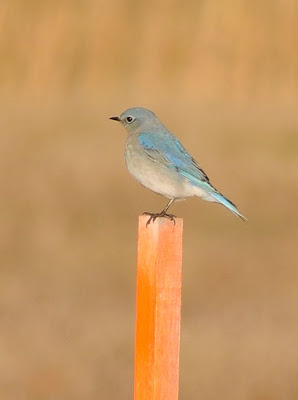 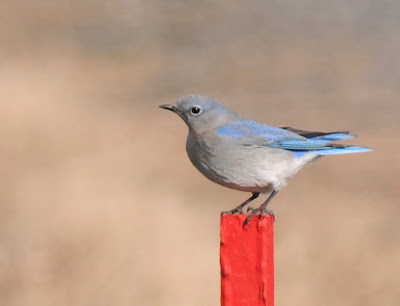 Thanks Rollin!
Posted by Nick Bonomo at 4:34 PM 6 comments:

If you don't have any plans for Sunday, December 19th (not like it's a busy time of year or anything...) please consider helping with the Quinnipiac Valley Christmas Bird Count (Wallingford area). Last year's compilers were unable to organize this year's count for personal reasons, so Corrie Folsom and Melissa Baston have taken the reigns and are trying very hard to recruit more birders to participate. Working against them is the fact that there are six other CBCs running in Connecticut on the same day. If you haven't committed to any of them yet, your help would be greatly appreciated on this count!

OK, enough CBC plugging. I hope to see you at the compilation!

A half hour of seawatching this morning from Stonington Point in Stonington, CT was rewarded with fantastic looks at a RAZORBILL right off the point. These were undoubtedly my best looks at this species from land in CT and I was able to digiscope a few photos, though the 20 mph West wind made that difficult. 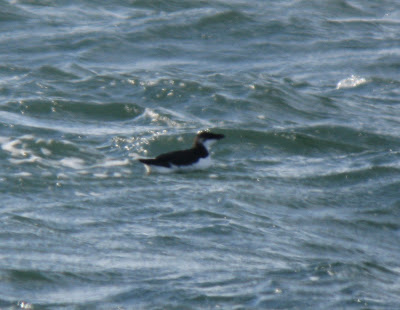 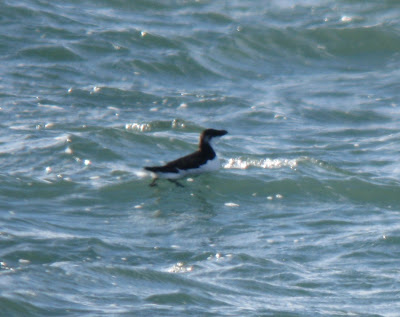 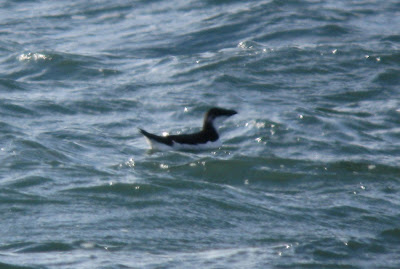 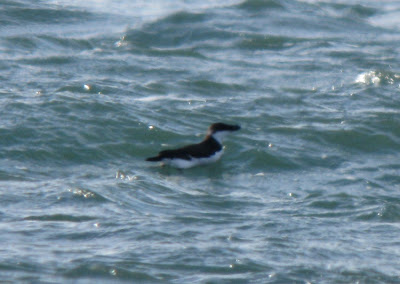 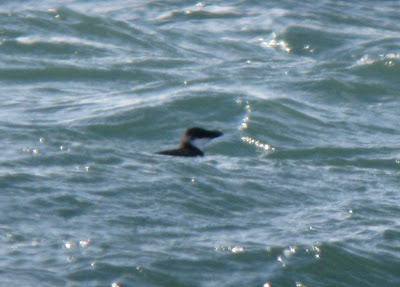 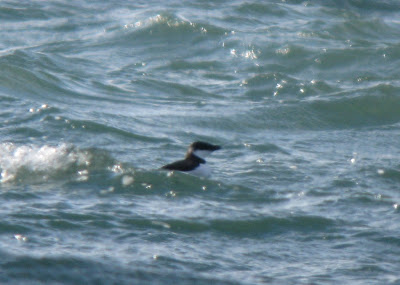 The bird's identity from that distance was unmistakable, but views of alcids in CT waters are usually quite distant and fleeting. If you're not too familiar with alcids, the most likely ID problem would probably be basic plumaged Thick-billed Murre. Compared to the murre, this Razorbill shows a deeper bill, a diffuse patch of white behind the eye (can be difficult to see from a distance), and a long tail that projects far beyond the folded wingtip. Any alcid other than Razorbill is VERY rare in CT waters, and Razorbill itself is a very uncommon winter resident, mainly in the eastern LI Sound.

Also scoped from the point were 13 COMMON EIDER (increasingly common in CT and now expected at this location during winter), 10 lingering Double-crested Cormorants and a single AMERICAN OYSTERCATCHER.

Early this morning parts of CT experienced a few bands of lake effect snow. It's not very often these snow bands reach CT before drying up. In my neighborhood we had a half-inch on the ground and about a full inch of fluffy stuff on the cars. The snow seemed localized though; nearby Lyman Orchards had nothing on the ground. 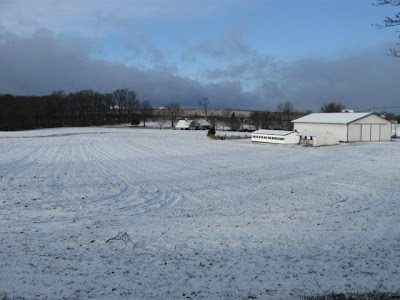 I spent a couple hours driving some Wallingford area backroads in search of roadside sparrows and geese in the fields/ponds. Highlights on Cooke Road included 3 imm. WHITE-CROWNED SPARROWS and 3 flyby SNOW BUNTINGS. The only unusual goose I found was a single adult GREATER WHITE-FRONTED GOOSE all by itself on Pistapaug Pond. 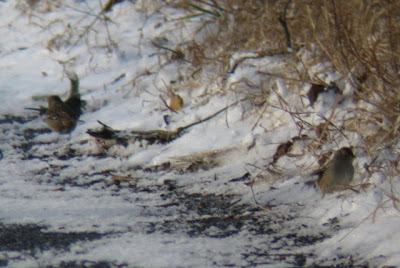 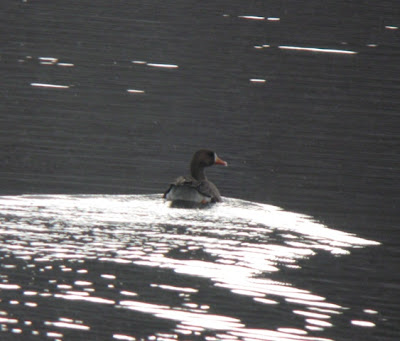 adult Greater White-fronted Goose
- NB
Posted by Nick Bonomo at 10:45 AM No comments:

Perhaps my favorite local Christmas Bird Count, the Stratford-Milford CBC is scheduled for Sunday December 26th (Boxing Day). It is one of the younger CBCs in the state, and therefore it is not as well-birded as some of the other counts.

Stratford and Milford (and parts of Bridgeport) are a few of the best birding areas in the state. If this is something that would interest you, check out the contact info on the COA website. Steve will be glad to hear from you. Hope to see you there.

As has been recently mentioned on regional listservs, the UK has been experiencing some harsh and early wintry weather. This has coincided with the appearance of two Northern Lapwings here in New England. Are the two events related? If so, are there more Lapwings to be found? What about other European species such as Redwing and Fieldfare?

This may sound familiar. Last winter was notably long and harsh in the UK, particularly in January. Redwings and Fieldfares were noted in great numbers in the western UK, which fueled speculation about a possible European invasion...which never materialized.

But at least this time we have some local evidence of a possible connection between harsh western European weather and North American vagrants.

Dennis Elphick notes "Easterlies have been prevailing on and off in the UK since September and back in October Red-flanked Bluetails, Red-breasted Flycatchers, Yellow-browed and Pallas' Warblers, Wryneck, etc were turning up on the East coast in unprecedented numbers. Starlngs began to arrive from eastern Europe in mid-October, a month earlier than usual and my own observations included streams and streams of birds arriving in Norfolk and Kent during the last week Oct/first week of Nov."

Thanks Dennis for the info.

This is something to keep in mind not only for the immediate future but throughout the winter.

Follow these links for last winter's posts about Lapwings and European thrushes.