State of the winter finch invasion in southern New England

As winter weather really sets in and the calendar is about to turn, let's talk a bit about this year's mega finch invasion.

Looking back to late July, Red-breasted Nuthatches began a large and prolonged flight which was a sign of things to come from other irruptive boreal songbirds. Purple Finches and Pine Siskins followed suit, along with a very early and moderate push of Red Crossbills that ended as quickly as it began. Siskins in particular moved through the region in spectacular numbers, especially in October. Also making an appearance in October were a smattering of Evening Grosbeaks, which had many folks hoping that this formerly common irruptive would again reach southern New England in good numbers. However grosbeak reports really dropped off in November and and been nearly non-existent in December.

White-winged Crossbills began to appear in the waning days of October, especially along the MA coast, which continued throughout the region through November. Numbers really appear to have tapered in December, except in places with extensive cone crops, such as on Cape Cod. Red Crossbills made a second push, this time even larger, in November, and have remained more consistent over the past month, though still in reduced numbers during December.

Common Redpolls started to trickle in during November; they became widespread in MA in December and are now really starting to appear further south. A few Hoaries have been reported here and there, but none south of Massachusetts yet. Pine Grosbeaks have taken a similar timeline to the redpolls, with numbers only increasing as they slowly but surely march southward. Bohemian Waxwings, after a few sightings on Cape Cod in mid-November (surprisingly typical, actually), have not been reported in southern New England since then, except for one or two single birds.

So where do we stand now? And what will the rest of the winter bring?

RB Nuts are mostly through with some birds lingering, often densely, in extensive appropriate habitat. Purple Finches are quite scarce right now, as are Pine Siskins except for a few well-stocked feeders, especially when you compare to the numbers that moved through in Sept-Nov. Evening Grosbeaks are back to being rare birds.

The crossbills are, as usual, a real enigma. Locally in Connecticut, both species have gone from common (mid-November) to rare and very local (now). White-wingeds have pretty much vacated the state, while Reds linger in small numbers along the coast. It appears that crossbills have largely vacated southern New England and are only lingering in locations such as Cape Cod and coastal Rhode Island, where there are large stands or forests of Pitch Pine or non-native species such as Japanese Black Pine. Connecticut, with precious little of that habitat type, is currently crossbill poor. Makes sense...they're in search of food and will not stop for long if there's nothing to be eaten.

But all is not lost! Redpolls and Pine Grosbeaks are on the increase. These rarer species usually take some time before they reach southern New England, often trekking south in a more deliberate manner than the other irruptives. Redpoll numbers should increase through January and into February, and Hoary Redpoll can be expected in CT and RI before too long. Pine Grosbeaks should also continue their invasion into the mid-winter period, and perhaps we'll be visited by a few pink adult males before all is said and done.

Bohemian Waxwings still have a ways to go, but as fruit crops are consumed in northern New England, I'm anticipating a push into southern New England during the late winter time frame, though in extreme southern New England we may have to wait until February or early March before they make their appearance...we'll see what happens. Let's just hope that there's fruit left on the trees by then; from what I've seen and heard, the local fruit crop is subpar this year, including ornamentals.

I would guess that Purples, Siskins, and Evening Grosbeaks will remain scarce, at least until early spring when birds will be on the move again. Perhaps we'll see some breeding well south of their normal ranges if food is sufficient. The nuthatches should remain localized to conifer stands/forests.

As for the crossbills, who ever knows with them. I would not rule out another pulse or two into the region. They're just so unpredictable. But another explosion like the one we saw in November would be unlikely.

No matter what happens, it has already been an exciting season for birders who enjoy these visitors from the north. Even if the early species are scarce the rest of the way, at the very least the redpolls, Pine Grosbeaks, and (hopefully) Bohemian Waxwings will keep us entertained.

This past Saturday, Dec 22, Carolyn and I teamed up to cover Area B on the Stratford-Milford CBC. This area includes hotspot Milford Point and some area to the north and east. Conditions were cold and very windy, tough for birding. Our first bird getting out of the car at Milford Pt in the morning was a COMMON REDPOLL, a life bird for Carolyn, and the only ones recorded on the count. 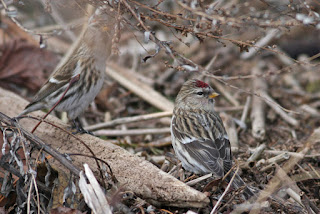 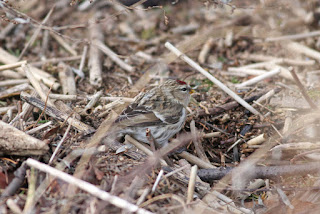 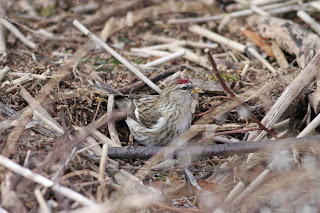 We had 55 species in all. Here were our highlights:
101 American Wigeon (most of these on the small pond behind Jonathan Law HS)
139 American Black Duck (easily counted on the LIS side of Milford Point thanks to constant hunter activity in the marsh all day)
1 Black Scoter (female at Milford Pt)
53 Horned Grebe (a fantastic count, especially given the VERY windy conditions during which they can be difficult to count on choppy water)
3 Northern Gannet (adults working offshore)
5 Great Cormorant (one in our area, the other 4 roosting on channel marker on Stratford side of river mouth)
1 Black-bellied Plover (Milford Pt)
2 Purple Sandpiper (with Dunlin and Sanderling on breakwater)
1 Razorbill (immature bird flying and landing on Milford side of the breakwater)
29 Monk Parakeet (one flock at Milford Pt)
1 Barred Owl (seen during daylight along coast, obviously away from breeding areas)
2 Common Raven (Milford Pt)
1 Ruby-crowned Kinglet (Walnut Beach)
1 Swamp Sparrow (Court Street boat ramp)
3 Common Redpoll (hanging around the parking lot at Milford Pt for most of the day)

Last year at this time Carolyn and I stumbled upon an adult ICELAND GULL at Circle Beach in Madison, CT. A few adult "Kumlien's" Iceland Gulls winter in CT each year, the second most common age class (next to first cycle). Adults, like this bird, sometimes winter in the same exact location year after year. This bird has returned to the same small beach for another winter. On Dec 20, 2012 Carolyn and I revisited Circle Beach and found Keith Mueller already on the bird. We watched for a few minutes in raw conditions before heading for warmth. 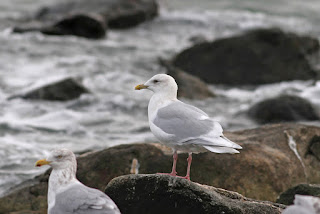 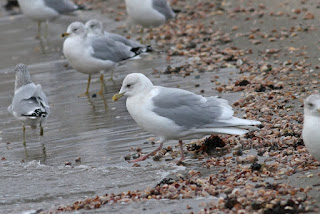 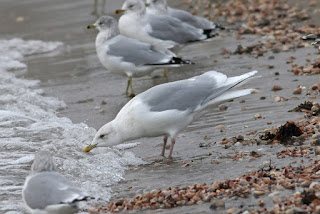 A few weeks ago friends Doug Gochfeld, Tom Johnson and Melissa Roach stopped by the New Haven area for a morning's birding. We had some nice birds including continuing "Audubon's" Yellow-rumped Warbler, Oregon-type Junco, and several lingering eastern warblers at East Shore Park. But earlier in the day we observed a nice crossbill flight at Lighthouse Point, with a few dozen of both Red and White-winged seen. Melissa enjoyed some killer looks at her life White-wings. Of those recorded by me and Tom, all Reds were Type 3. 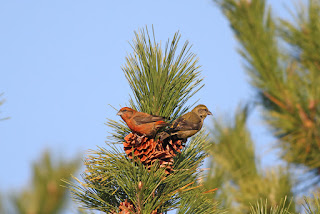 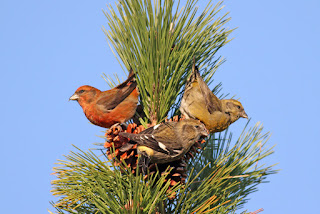 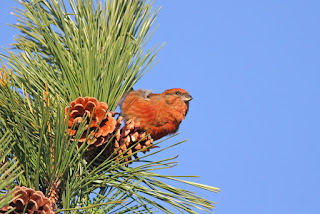 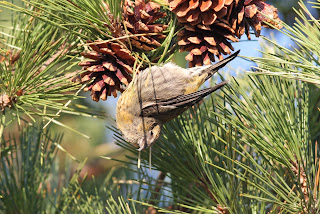 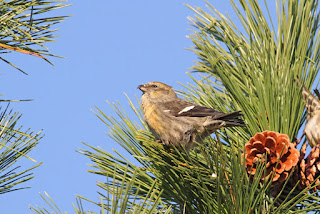 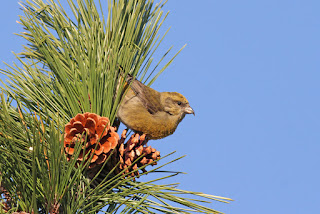 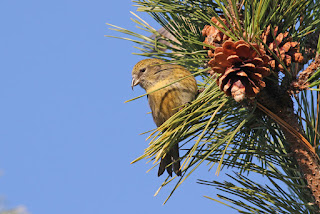 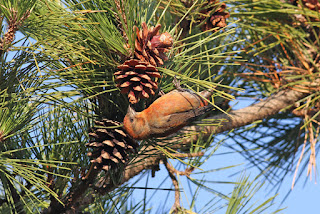 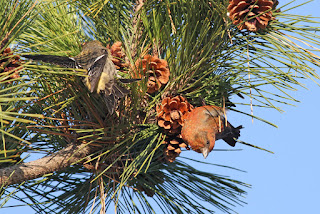 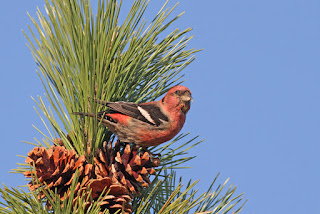 Took a day trip east to Massachusetts today with Jake Musser, Phil Rusch, and Glenn Williams purely for some rarity chasing. Our #1 target was the hatch-year LITTLE EGRET in Hyannis. 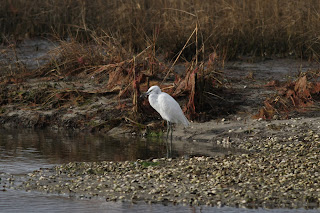 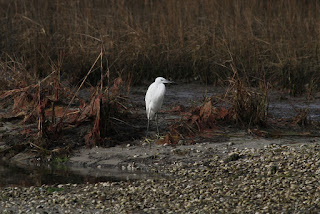 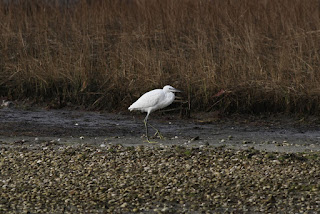 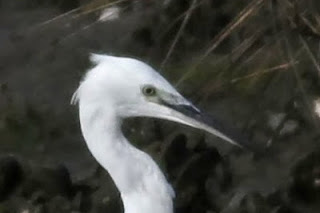 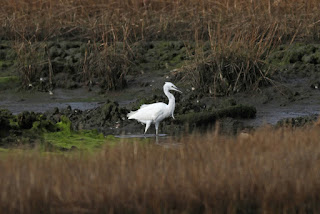 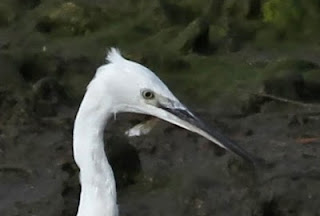 On our way home we detoured slightly north to view the long-staying NORTHERN LAPWING. 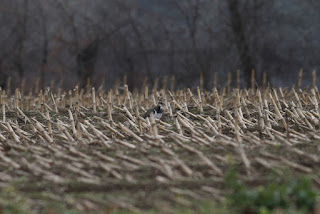 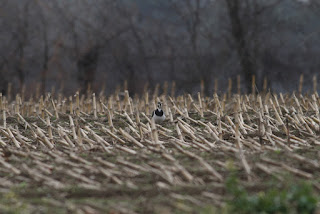 Since we had some time to spare we last checked for the nearby ROSS'S GOOSE, only the second I've seen on the east coast.