Showing posts from March, 2018
Show all

A Northern Shrike in Japan 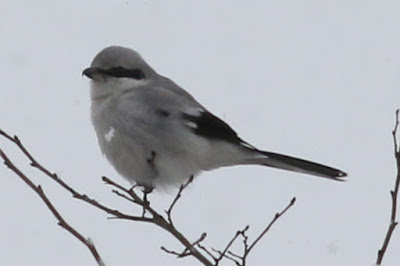 I’m recently back from two weeks in Japan with Julian Hough and Dave Provencher. We had a blast and saw heaps of great stuff. Over the next several weeks I hope to roll out at few posts related to that trip…some ID stuff, and some basic trip report stuff. Fixing the formatting on this blog is also something I'd like to get around to. One of the locally scarce birds we were lucky to see in Japan was this Northern Shrike on Hokkaido. In speaking with an experienced local, they are just about annual. We had two encounters with the bird. On our second visit we were able to secure photos, including a couple of in-flight shots. These are heavily cropped and unedited. The Holarctic “northern gray shrikes” underwent a bit of a taxonomic shakeup in 2017. Per the AOS, they were split into Northern Shrike and Great Grey Shrike. But the line drawn was not a clean North American versus Eurasian split as one might have assumed it would be. Rather, the East Asian form(s
Post a Comment
Read more
More posts