Showing posts from April, 2009
Show all

Next month or so

April 26, 2009
This space will likely be pretty quiet for the next 4 weeks due to the dreaded Internal Medicine rotation at YNHH. Talk about bad timing, just as migration is really getting started! - Nick
2 comments
Read more 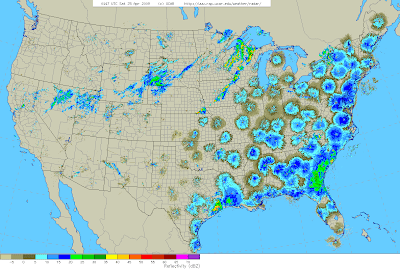 We're still a week short of May, but it's difficult NOT to be excited about tonight's migration. We'll have plenty of arrivals tomorrow and Sunday, and hopefully a rarity or two among them. Enjoy the weather and the birds! - Nick
Post a Comment
Read more

Something to look forward to 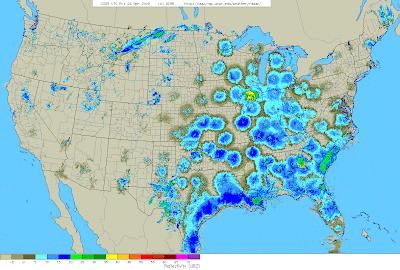 Here's the current radar for the lower 48 states: As you can see the SE corner of the country is lighting up with birds tonight. The northeast is currently quiet due to a stiff WNW breeze, but this will be shifting to the SW during the day tomorrow. Friday and Saturday nights (at least) should bring perfect migration conditions. We're in prime overshoot time, and we should be on high alert for something like Swainson's Warbler (as of yet unrecorded in CT) or Wilson's Plover. But it will just be nice to see and hear more than the 3 common early-season warblers. - NB
1 comment
Read more

On Monday April 20, Tina Green found a Western Meadowlark at Sherwood Island State Park in Westport, CT. If accepted by the ARCC, this would be a first state record. The identification of this species by plumage alone is extremely difficult. Some (many?) individuals may not be identifiable, and feather-by-feather analysis is necessary. Identification is best confirmed by voice. The Sherwood meadowlark shows all the expected features of Western with one notable exception: the malar is a light buff rather than yellow. Fortunately I was able to hear the bird calling on the afternoon of the 21st, and thanks to equipment borrowed from Noble Proctor, recordings were made. Here are some of my digiscoped photos with a few notes: Low-contrast head pattern, and tertials with thin barring. Western (top) shows paler upperparts that lack rufous tones. Its flanks are whitish with broken streaking that often appear more like spotting in the field. The Eastern (bottom) is a darker, more richly-
5 comments
Read more

April 19, 2009
In the April 2008 issue of The Connecticut Warbler , I wrote an article entitled "Connecticut's Next 15 Birds." Thirteen experienced CT birders submitted a list of ten species he/she thought were the most likely to be added to the state's list of avifauna. Only one bird received a vote from all 13 members of the panel: Townsend's Warbler. Townsend's has been seen in every northeastern state except CT and Vermont. New York, for example, has at least 18 records by itself! Massachusetts has a large handful of records, with three coming in the past 5 years. That includes a stunning male currently being seen in the greater Boston area. Erik Nielsen of Westwood, MA took some fantastic photos of the bird this morning; you can find them HERE . While most birders think of late autumn/winter as the time to find this species in New England, there are many spring records as well. This species can be confused with Black-throated Green or even Blackburnian Warbler if one
3 comments
Read more 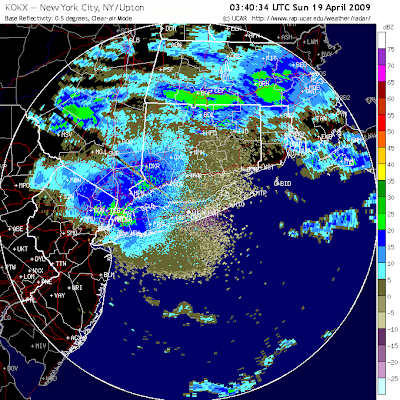 We have a very interesting night of migration happening in our region. There is a cold front sagging into Connecticut from the north. To the south of the front are the warm temps and SW winds we experienced earlier today (in other words, prime migration weather). Currently, however, we're cloudy and showery with light ENE winds, but not too far to our southwest the radar is lighting up with birds. Tough to predict how many birds will make it this far north overnight. When migration is at its peak, these are fallout conditions, as birds are knocked out of the sky when they fly into rain. Someplace in NY/NJmight be quite birdy tomorrow, but it probably won't work out for us this time. If it does, it will probably be in the SW part of the state. Here is the current radar: The horizontal lines and blobs in northern CT and MA are rain showers, but the diffuse blue patch in the NYC metro area is likely migrating birds (at least in part). It looks like birds are reaching CT after
Post a Comment
Read more

April 17, 2009
68 + sunny = goodbye gulls, hello neotropical migrants. My neighborhood this morning was pretty birdy with common stuff as I walked to my car on the way to school, including a handful of Chipping Sparrows that suddenly arrived overnight thanks to the SW winds. We're still only halfway through April, so we can't expect much more than a few warbler species at a time, but we're getting there. Many of the common early migrants are moving through in very good numbers. Remember that just because you don't add a FOY species doesn't mean there wasn't a good deal of migration the night before. Also pay attention to numbers of sparrows, kinglets, etc. When SW winds combine with clear skies at night, as last night, birds will be on the move. Check out this report from Ian Davies who bands birds in eastern MA. Tonight will bring some more migration through the region, though as Scott Kruitbosch pointed out on CTBirds, conditions are not perfect by any means. - Nick
Post a Comment
Read more

April 16, 2009
I just set up my phone to be able to post from the field. I'm not quite sure when this would come in handy, but it's cool to have the ability to do it. If the iPhone had a good camera, I could phonescope and immediately post photos of rarities, but the camera stinks so that's not an option right now... - NB
1 comment
Read more

April 15, 2009
This spring I hope to do more in the way of discussing nocturnal migration and how it relates to weather. Whether I do or not is another question, but folks to our north and south analyze radar on a more regular basis. The go-to website for this has always been David La Pluma's page based out of New Jersey, woodcreeper.com . Unfortunately David is not going to be able to maintain the website for the upcoming spring migration, but his old posts and links on the right side of the page offer tremendous resources. Tim Spahr of Massachusetts recently began his own website of radar interpretation , and I look forward to following it regularly. Derek Lovitch of Maine has also been doing this over the past couple of years. View his recent blog entry , and be sure to click on his "Intro to Birding by Radar" link at the end of the entry. Derek does a fantastic job with this. If anyone out there has interest in this, you can do it yourself. While it probably takes a long time to
4 comments
Read more

April 14, 2009
I had some unexpected free time today and was able to spend late morning in the woods for the first time this spring, rewarded with many Palm and Pine Warblers, a lone Yellow-rump, drumming Sapsuckers and a backyard Pileated WP. Pine Siskins were also scattered about, many in pairs chasing each other around. While I didn't witness any copulation or stronger signs of nesting, I would imagine that some of these birds will be breeding locally. I then spent some time at Milford Pt, where attention was switched back to gulls and waterfowl. No Brant were to be seen, but several hundred gulls were there including a second-winter Iceland. I'm not used to gulling this late into spring (with the exception of the Boney flocks that are typically around into April). Every time I feel a warm breeze or hear a FOY spring migrant singing in the distance, I get sucked back into winter by gulls, geese, etc. Don't get me wrong...this is a very good thing. This year we have had more gulls an
Post a Comment
Read more 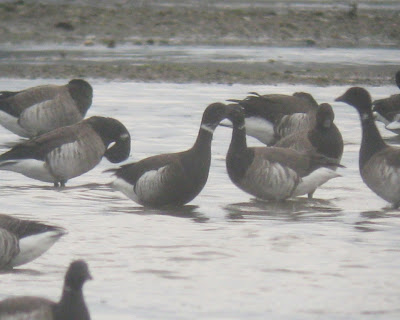 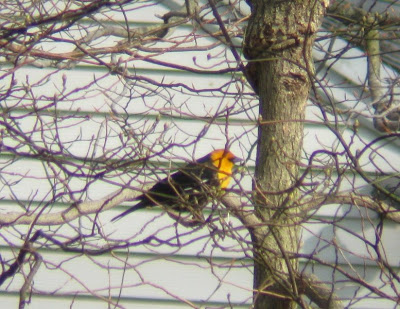 The YELLOW-HEADED BLACKBIRD reported yesterday by Stacy Hanks was still present late this afternoon in her Milford neighborhood. My timing was fantastic. Roy Harvey had been on site for over 8 hours! I don't think I was there for more than 15 minutes before the bird flew in :) Here are a couple of digibinned photos: - NB
5 comments
Read more 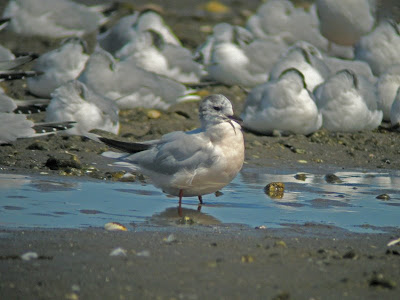 My plan for the day was to sort through the large gull congregations that had been present along the Fairfield County coastline. Upon arriving in Milford late this morning, it quickly became evident that the gull numbers were quite low. Recalling Frank Mantlik's report of a Little Gull in Southport yesterday evening, I headed down to Sasco Creek and relocated what was presumably the same bird among 1000+ Bonaparte's Gulls. The flock was very tame, allowing prolonged close views. This bird had a strong salmon-pink wash on its underparts. - NB
Post a Comment
Read more

April 02, 2009
Over the past couple of weeks, thousands of gulls have concentrated along the CT coast between West Haven and Norwalk, most reliably centered around Stratford. They have spent much of their time feeding on some sort(s) of plankton/larvae that are currently 'blooming' out there. Whatever the food (the experts are working on it), it's making for quite a show. Among the flocks have been several Iceland, Glaucous, and Lesser Black-backed Gulls. The stars have included a Mew(Common) Gull, Little Gulls, Black-headed Gulls, a probable Thayer's Gull and a possible "Old World" Herring Gull. If you want to count the probable Thayer's, eleven species of gull have been seen along this small stretch of coastline over the past two weeks. Let's see if we can add to this tally before the fun ends, which could happen any day. - Nick
Post a Comment
Read more
More posts