Showing posts from February, 2013
Show all

[Feb 25 update: We have received correspondence from a couple of authoritative larophiles from other continents with SBGU experience. Both have stated that this could very well be a good Slaty-backed Gull but there are some concerns, with leg color and structure being mentioned most often. No deal-breakers though. Other possibilities include a very atypical smithsonianus HERG or a hybrid of New or Old World species. As one of them put it "it certainly looks so similar [to SBGU] that it would be worrying if it is something else entirely!" The bad news is that we're no closer to knowing what this bird is. The good news is that their concerns echo our own, which shows that most of us seem to be on the same page here.] A few days ago Mark Szantyr found an interesting first cycle gull at the Windsor Landfill that seems like a decent candidate for Slaty-backed Gull. I carpooled to the fill this morning with Julian Hough and Jake Musser to find a small group of birders a
7 comments
Read more 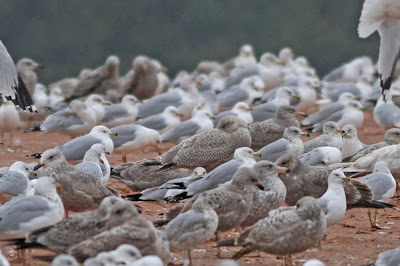 I was able to spend a few hours yesterday afternoon at a landfill in the Research Triangle area of NC. Birds numbered in the thousands, dominated by Ring-bills. There were several hundred Herrings scattered through the masses, as well as a healthy number of Lesser Black-backed and a handful of Great Black-backed Gulls. The highlight came in the form of two first cycle GLAUCOUS x HERRING GULL hybrids. The first bird was a beautiful, subtle milky brown color, sporting brown primaries with thin white fringes. A large bird with a Glaucous-like structure and bill pattern. sleeping Flanked by young Herring Gulls. A lucky shot, note the pure white-winged bird with stretched wing to its right. More on that one below. The second GLGUxHERG was more Glaucous-like in body plumage. In fact, when I first saw the bird from just the neck up, I thought I had found a Glauc. But it was easily ID'd as another hybrid by those brown primaries and tail. vaguely reminiscent o
Post a Comment
Read more
More posts