Showing posts from 2011
Show all

That time of year again...

December 12, 2011
**NOTE: The Xtranormal server is back up, so the video at the link below is again accessible.** This gull post was quite popular last year. If you've ever spent any time at a landfill, check it out. Hope to pick up the blogging pace a bit as the holidays approach! I've fallen a bit behind lately. - Nick
Post a Comment
Read more 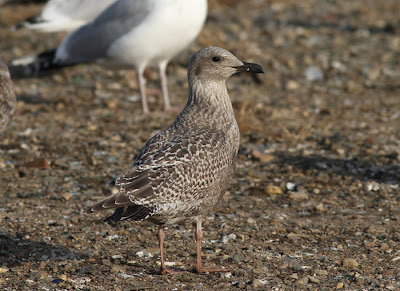 My first landfill visit of the season was highlighted by a crisp juvenile THAYER'S GULL among 1000+ LWHGs working the trash piles. Interestingly it was the only uncommon gull present...not a single Iceland, Glauc or LBBG. It's a small landfill that can be very hit or miss, but has a track record in recent years of pulling in some nice birds (two Slaty-backs and a few Thayer's). Let's hope this is the start of a productive season. For anyone looking for the bird, some ID features to note are: - more delicate head/bill structure than HEGU, heavier-bodied than most Kumlien's Gulls - all black bill with just the slightest hint of paling at the base of lower mandible - faint mask through the auriculars, more visible at some angles than others - apparently all juvenile scapulars - dark-centered tertials with marbled edging - dark brown primaries (but not blackish) with thin pale fringes as seen on the folded wing - short pinkish legs In flight: - dark outer webs o
3 comments
Read more 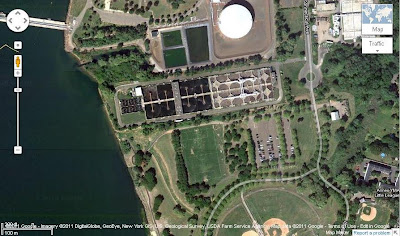 East Shore Park in New Haven, CT has developed a reputation as one of the best late fall birding spots in the state. The park lies immediately south of a sewage treatment plant that keeps flying insects alive well into the autumn season thanks to, well, the treated sewage pools. These insects have concentrated lingering warblers, a phenomenon that has brought more birders to the park, which has in turn led to more interesting sightings. Satellite view of the north end of East Shore Park adjacent to the treatment plant The other specialty of the park happens to be Cave Swallows, which during invasions can often be seen hawking insects over the treatment plant, particularly on colder days. A few Northern Rough-winged Swallows attempted to winter here a few years ago. This month 10 different warbler species have been recorded at the park so far...not bad for November in New England. Today I had single TENNESSEE and ORANGE-CROWNED WARBLERS plus a late BLACKPOLL. This place is now
3 comments
Read more 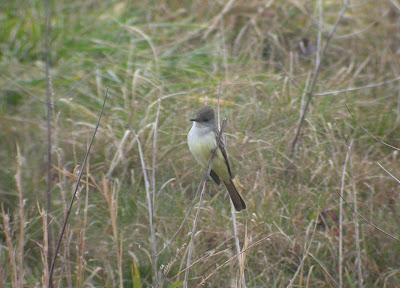 Political borders are a funny thing in birding. Whether town, county, state, or continent...most of our listing areas are determined by these boundaries. For those of us who keep a Connecticut state list or reside on the Avian Records Committee of Connecticut, we frequently scrutinize bird status and distribution on a relatively small scale. The sample size for a state like Connecticut pales in comparison to the northeastern US region as a whole, for example. So we have perhaps more "quirks" in our avifauna's history than a larger state might have. For instance, Connecticut has ZERO records of Townsend's Warbler (widely considered our #1 biggest miss), but New York has about 20. If CT and NY were formed as one state, Connectiyork would have about 20 records and most birders living in what is now Connecticut would have it on their Connectiyork lists and would hardly consider it a statewide "blocker." Given that we're entering the heart of the western va
5 comments
Read more 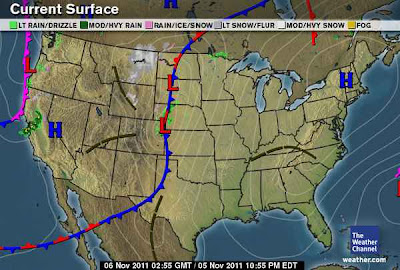 UPDATE Nov 9th: It now looks as if Friday is the best-looking day for Cave Swallows along the CT coast in the short-term, as it will be the only day with NW wind here (potentially quite potent, which is good). The overall setup has continued to be unimpressive, but since we're entering that peak time for these birds, it may be enough to produce a few along the coast. Tim Spahr of MA pointed out to me that next week may be more promising...indeed it looks like we'll see a more prolonged period of SW flow, more in line with classic Cave Swallow invasions of recent years. If followed by NW winds, it could be very interesting. But that's well down the road. Plenty of time for things to change. ORIGINAL POST: While at Lighthouse Point on Friday, Paul Roberts mentioned that we would be seeing some SW winds this week. During the month of November us birders in the northeast look for weather patterns like this one - a straight-line SSW flow from Texas to the Great Lakes. It is
Post a Comment
Read more 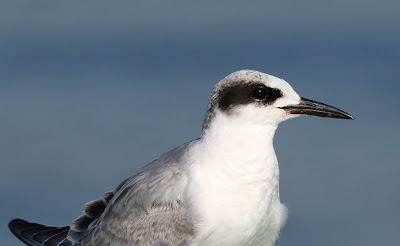 Yesterday morning I took advantage of relatively calm waters and took the boat out for some fishing. Over on the Long Island side of the sound (NY waters) the fish and birds were well concentrated in the Eatons Neck area, a location typically full of fish at this time of year. The fish were easily located thanks to a feeding frenzy of Laughing Gulls. Mixed in the flock were a single ROYAL TERN, several FORSTER'S TERNS, and a few first-winter BONAPARTE'S GULLS. Back on the CT side of the sound were a few more FORSTER'S TERNS and a late immature COMMON TERN. A three-tern day in November...not bad! first-winter Forster's Tern (CT waters) three more Forster's Terns (NY waters) - NB
Post a Comment
Read more 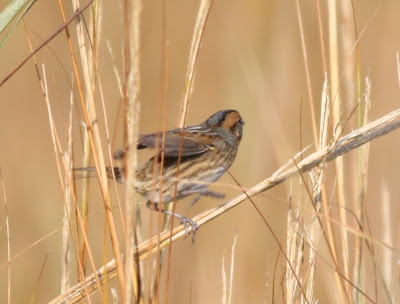 UPDATE 11/3 - Julian has made a blog posting with his photos and thoughts on this bird, so check it out . Included are thoughts from Fletcher Smith, author of the recent NAB article on the sharp-tailed sparrows, who agrees this bird fits alterus best. ORIGINAL POST: Yesterday at Hammonasset Beach State Park in Madison, CT Julian Hough and I observed this bright Nelson's Sparrow, clearly representing one of the interior races. It is quite unlike the drab, gray-toned Acadian subvirgatus subspecies that breeds not far up the Atlantic coast to our north. All photos are untouched - only cropped. Nelson's Sparrow, likely alterus Separating alterus from nelsoni during migration is a difficult task. A recent article in North American Birds states that approximately 30% of interior birds banded in Virginia during the nonbreeding season could not be assigned to subspecies given current knowledge. If they're tough in the hand, they're tougher in the field.
1 comment
Read more 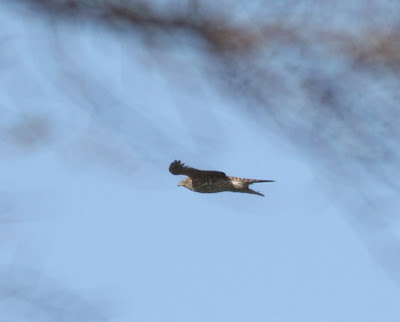 This morning Phil Rusch and I made a last-minute decision to take the ferry from New London, CT to Orient Point, NY in hopes of running into a storm-blown pelagic bird. Though the winds were not ideal, our decision was based largely on yesterday's report from Angus Wilson of 300+ Great Shearwaters seen from nearby Montauk Point. With a pool of birds out there, we hoped that one would stray into the sound. But as is typical in the sound, the birds were few and far between. We only tallied a handful of Northern Gannets and just a few scoters and loons. Oh well. From there we headed to Lighthouse Point in New Haven where a nice late-season hawk flight was underway. The highlight while we were there was an immature NORTHERN GOSHAWK that made a pass through the park before continuing west over the harbor, plus an apparent hutchinsii CACKLING GOOSE (tiny white-cheeked goose with slightly paler breast and upperparts) with a flock of migrating Canadas. Here's a crummy photo I managed
Post a Comment
Read more 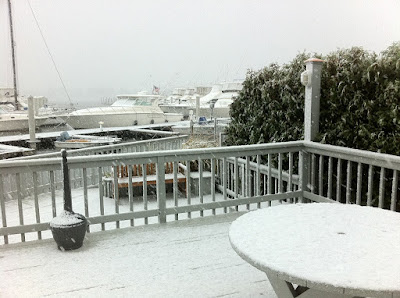 29 Oct 2011, Norwalk, CT An unusually cold and intense nor'easter has arrived in New England. Autumn nor'easters are not rare, but those delivering measurable snowfall in October sure are! Here are some quick thoughts on how it may affect the local birding world. - The strong NE winds may result in a few birds being blown into Long Island Sound. Expect a pulse of Northern Gannets, probably a scoter/loon movement, plus a shot at something rare (an alcid or jaeger perhaps? Parasitic is the default jaeger in CT waters, but we're entering into the time of year when Pomarine Jaeger should be looked for.) - Check inland bodies of water, especially during Saturday's inclement weather. Waterfowl should be migrating on the northerly winds and will be knocked down when they run into the precip approaching from the SW. Could be a fallout at the reservoirs on Saturday or first-thing Sunday. - Sunday should produce a nice diurnal migration as birds move south to vacate the
Post a Comment
Read more 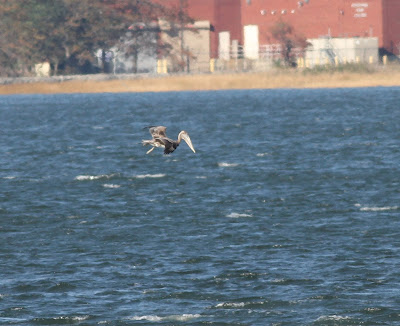 An immature Brown Pelican (well, at least one) continues to be seen up and down the Connecticut coast. It has recently settled into New Haven harbor and been seen by many birders. I happened across the bird on the 25th while I was birding East Shore Park for lingering passerines. It's amazing to think that we're still seeing the effects of Hurricane Irene, but a few pelicans arrived with the storm and at least this one has persisted in Long Island Sound. Below are a few series of dives as it was actively feeding in the rip. Brown Pelican in New Haven Harbor on Oct 25, 2011. Here gliding above the horizon with the West Haven VA Hospital in the background. - NB
1 comment
Read more
More posts