Today's well-timed sou'easter delivered a substantial alcid flight to the western RI coast, with some trickling in to CT waters. The key for us in Connecticut is the wind direction - winds out of the southeast are best because our coast is south-facing. Northeast wind, which is great for places like Andrews Point and Race Point in Massachusetts, doesn't work so well for us. Today's winds were sustained around 30mph per buoy data in eastern Long Island Sound, which is enough to pin alcids against a shoreline. A mid-morning report from Rhode Island, where Chris Raithel was seeing hundreds of westward-bound Razorbills, kicked my lazy butt into gear and sent me to Stonington Point, the eastern-most point of land in CT. Here, Russ Smiley and Dave Provencher had already been watching.

Apparently the early morning was quiet at this site, but Dave had his first Razorbill not long after arriving just before 11am. I pulled in at 11:30 and they had a few RAZO on the water.

The rain picked up, and we retreated to our respective cars for cover. At 12:37 I looked up from my phone to see a DOVEKIE flying right at me, eye level, at the tip of the point. I got the bird in my bins for a second or two before it dropped out of sight down towards the water's edge. The others had not seen it, so I motioned to them, and we crept towards the tip. The Dovekie flew up and out towards the west and disappeared into the fog. 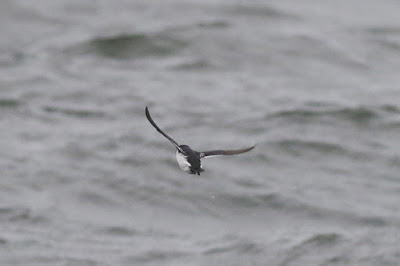 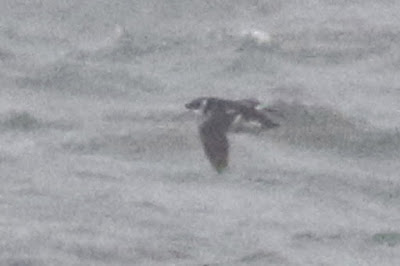 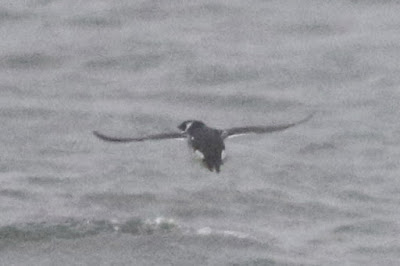 Dovekie is a rare bird in Connecticut. A storm is required to "wreck" one (or more) into Long Island Sound. This was my first for the state. Before this, I had seen a dead one being eaten by Great Black-backed Gulls at Stonington Point, and Frank Gallo and I had what I'm sure were two Dovekies as specks in the heat shimmer following Superstorm Sandy. So it was nice to officially add this one to my state list.

The final Razorbill tally was estimated at about 15 birds, a great number for the state.

I have spent surprisingly little time birding Rhode Island over the years, especially considering how often I have driven through the state, particularly when I was attending Stonehill College in Easton, MA. Still, I know that the Ocean State has some fine habitat to offer birders. In fact, birding just over the CT/RI state line into Washington County, RI is a sad reminder that modest tracts of public ocean-facing land are so close to my home state...and yet it feels so far. Connecticut, of course, lacks a true sea coast, as we are essentially blocked by Long Island and Fishers Island. The Rhode Island coast doesn't really "stick out there" like eastern MA or Long Island, but it sure beats Connecticut, at least for those of us who feel drawn to the sea.

On this seasonable windless December day I found myself in Narragansett and aimed to spend the afternoon poking around the coastline. I'm quite sure this was actually my first time birding here, unless you want to count driving to Galilee to hop on a boat. This was as much a scouting mission as anything, with a particular focus on gulls (shocker).

At Narragansett Town Beach, upon pulling into the parking lot I noticed a fine adult BLACK-HEADED GULL among 50 or so Ring-bills. An eBird check shows this bird was first reported here about two weeks ago. This is a known stretch of coast for wintering BHGU. 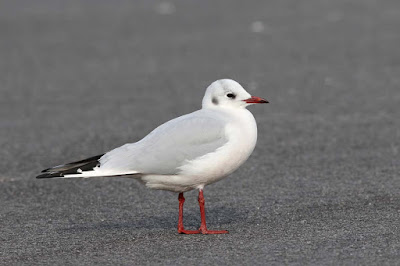 Down at Point Judith, a few trawlers were working offshore and were followed by gulls and GANNETS. Scoters and eider could be seen close to land, and a single RAZORBILL was with them.

Driving around the corner to Camp Cronin, a BARRED OWL was hunting in broad daylight from a fence along the road. On a return trip later in the day, two owls were working the same field. While we have had noticeable winter incursions of this species in the past, the current Barred Owl movement appears much more significant than any I can recall previously.

From the Camp Cronin lot itself, some 5,000+ gulls could be seen on the breakwaters. Most were out of range of ID, but I did pick out a single immature ICELAND GULL.

The fishing port of Galilee also held some gulls that included a first cycle LESSER BLACK-BACKED. 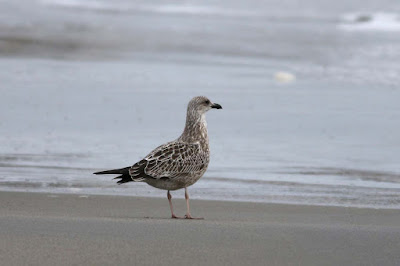 I really enjoyed exploring a new stretch of coastline, and close enough to home for a day trip, really. The gull numbers in the Galilee area were impressive and should get me back there sometime this winter for a more thorough scour. Gull numbers in CT generally remain modest until the plankton event begins in late Feb-early Mar, so this area could make a fine early-mid winter alternative. 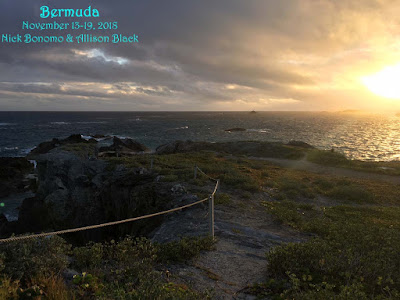 Allison Black and I are recently back from 5 full days in Bermuda, where we were in search of Bermuda Petrels (AKA Cahows), among other things! Yes, we succeeded in seeing the birds, including a seawatch that tallied 25+ individuals! Unfortunately, both of our boat trips were canceled due to weather, so we were unable to see them up close and personal.

Though not a classically hardcore birding trip (we mixed birding and relaxation), I put together a brief report for independent traveling birders who are looking to do Bermuda on their own. It is meant to be just a starting point. If you have any other questions, please do not hesitate to email me.

Of course, for those wishing to truly maximize their time with the petrels, I would recommend joining Bob Flood's "Cahow Experience" tour. Contact him via http://www.scillypelagics.com/. I have not taken his tour but have heard fantastic things and have no doubt that this is the best way to observe this species.

Pantanal 2018 - One last Jaguar search, and north up the Transpantaneira

We spent our last evening on the river in search of more mammals. We ended up 3-for-3 on Jaguar searches...or more like 4-for-3, since we would see two cats this afternoon.

One, a thin young female, was cruising the water's edge for prey. Alas, no luck there for her. Later we would only briefly view a large male that stayed out of the open. Photos of the female below. 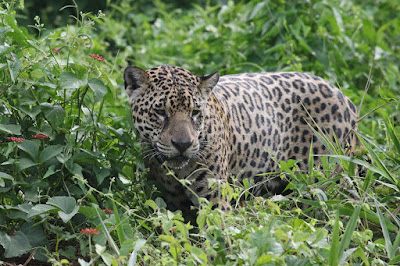 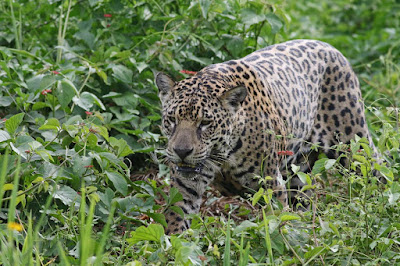 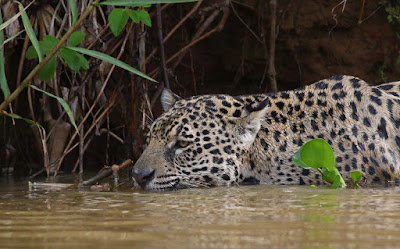 After breakfast on the boat we said our good-byes to the crew and disembarked at Porto Jofre. A pair of HYACINTH MACAWS was feeding in the palms near the dock.


We made our way back about two-thirds the length of the Transpantaneira to the Pousada Rio Claro, where we would stay for one night - our last night in Brazil. 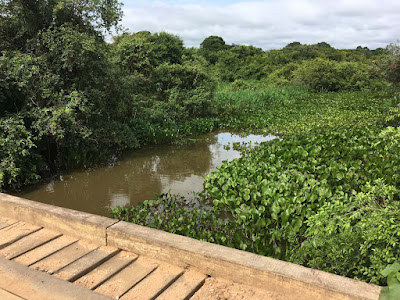 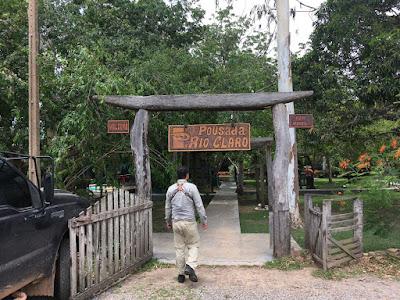 Nanday Parakeets were the stars here.


In the afternoon we took a walk around the grounds followed by a boat trip up the Rio Claro. We ended our final full day with a bang when we came across a SOUTH AMERICAN TAPIR near some water hyacinth! What an absurd-looking animal. 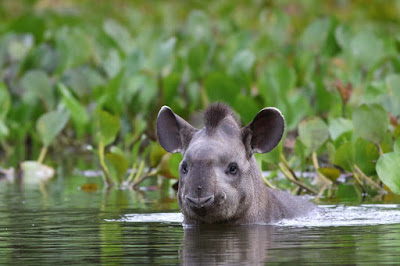 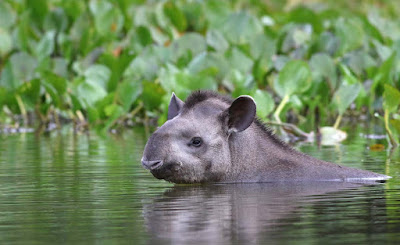 Our one and only GREEN-AND-RUFOUS KINGFISHER of the trip was spotted perched in the shadows of the river's edge; we enjoyed more SUNGREBE and SUNBITTERN sightings.

With afternoon flights out of Cuiaba, there was not much time for birding on our final day. We did, however, squeeze in a productive pre-breakfast walk, highlighted by a male MATO GROSSO ANTBIRD, a regional endemic.

On that note, we said goodbye to the Pantanal...for the time being. Another successful Connecticut Audubon Society trip was in the books. I would highly recommend the Pantanal to anyone who loves wildlife. It is not just for birders...in fact, it's really the mammals here that steal the show. 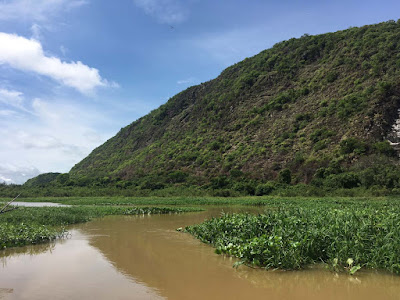 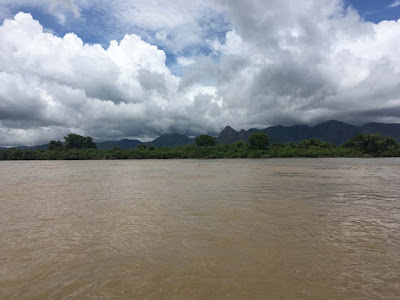 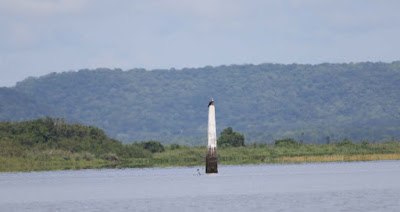 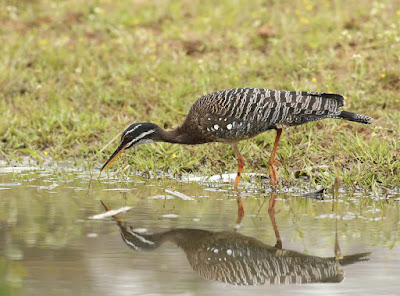 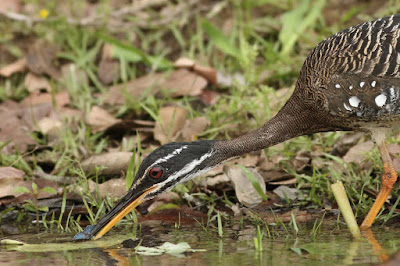