Earlier this month I was joined by Frank Mantlik, John Oshlick, and Phil Rusch for three days of seabirding off Hatteras, NC with Brian Patteson. We had a nice turnout, as expected for the date, with a full boat on June 1 and most spots filled on the following two days. Top-notch seabirding, as usual. Here is a brief day-by-day summary with some accompanying photos. Thanks to Kate Sutherland for the official numbers.

June 1
Today was warm and rather calm, perhaps too calm (if there is such a thing). The lack of wind kept many birds low or on the water, but there was enough breeze to disperse the scent of our chum slick for the storm-petrels. It was a beautiful and comfortable day to be in the Gulf Stream. Diversity was quite high, with several notable species seen. The final highlight of the day came on the ride home when Brian intercepted a pod of FALSE KILLER WHALES. Awesome. 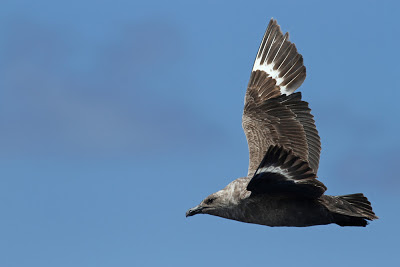 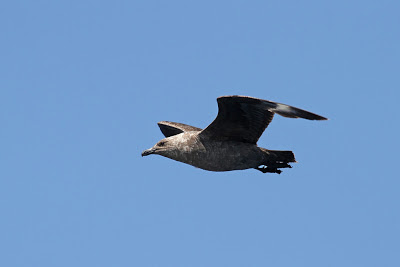 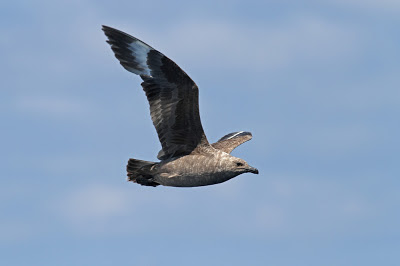 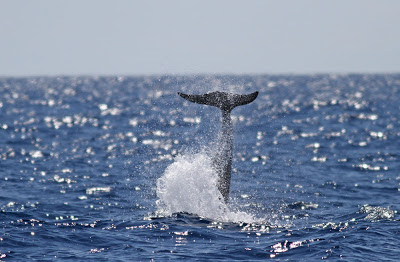 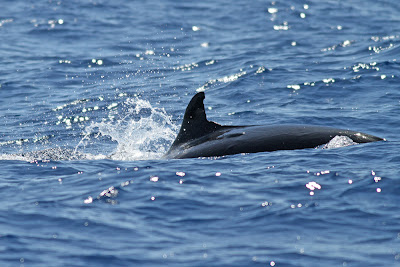 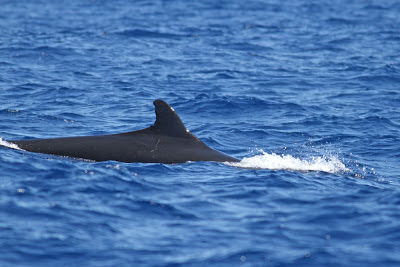 June 2
Day #2 was windier, which meant more birds in the air, including a great showing of Wilson's Storm-Petrels. Since this is the time when European Storm-Petrels have been known to appear here, we were paying particularly close attention to the Wilson's. No luck though. Despite lower species diversity today, numbers of the featured Gulf Stream species, such as Black-capped Petrel and Band-rumped Storm-Petrel, were higher today with some nice looks to boot. 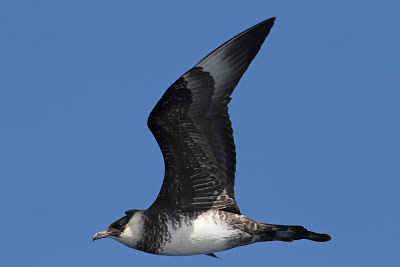 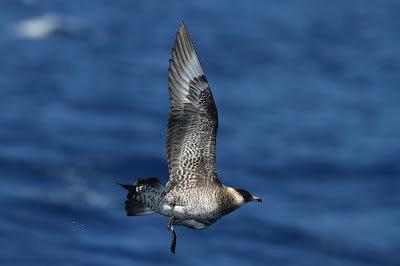 June 3
Our final day on the water was windier yet, as we had a strong cold front approaching from the west. The wind got birds flying quickly and quite high. This is the way to see Black-capped Petrels. They really amaze you with their speed and agility under these conditions. As the day wore on, ominous clouds approached, the winds kicked up even more, and the birds were swarming ahead of the front. We all had the feeling that something rare would appear soon.

And, eventually, it did.

Steve Howell got on a distant Pterodroma that he spotted just in time to call a BERMUDA PETREL as it was arcing on the horizon, moving further and further away. But he would be the only person on board (far as I know) to see the bird well enough to identify it. By the time I got on the bird, it was a distant speck. In fact the only reason I figured I was looking at the right bird was that it was moving exactly the way Steve was describing it. So close yet so far...

Although we were a bit bummed that the Cahow didn't want to play with us, it did not put a damper on the day, which was pretty awesome overall. The only bad moment of the day came when it was time to head back to shore! You hate to leave birds out there.

Another moment of excitement came as we were approaching the marina in a thunderstorm, when an immature MAGNIFICENT FRIGATEBIRD was spotted hanging over land.

I can't wait to get back down there for more high quality seabirding. I hope to have enough time to put up a greater selection of photos of the feature Gulf Stream species that are worth a closer look: Black-capped Petrel (white-faced versus dark-faced), Cory's Shearwater (borealis versus diomedea), and Band-rumped Storm-Petrel (molting versus non-molting).

I recently acquired a copy of Princeton University Press's "Birds of Europe, Russia, China, and Japan" by Norman Arlott (copyright 2007), a two-volume illustrated checklist (7.5x5 inches, ~240 pages each, one for passerines and one for non-passerines). I have loved most of Princeton's line of bird books, but my review of this one may come across as a bit harsh.

First off, I'm not a fan of "illustrated checklists," whatever those are. Generally when I see that term, I picture a checklist with a single crummy representative photo per species. But that is not what you'll find here. Amazingly there isn't a single checklist to be found in either book. I don't know what to make of that exactly, given the sub-genre to which these books supposedly belong.

Basically we're dealing with a low-end field guide here. I will explain.

Here is the format: text on left page, plate on opposite page. See photo below: 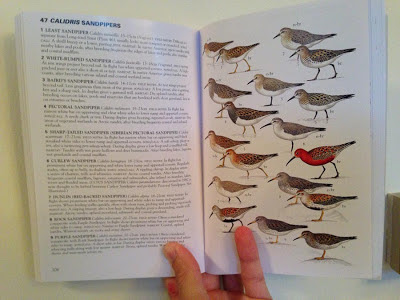 This quote from the Introduction is telling: "I did not want to produce just a coloured checklist or the ultimate field guide..." So what we're left with is a hybrid of those two...except that there is no checklist, and the identification info is severely lacking.

The text is limited to just a few lines for most species, and most major field marks are excluded! Perhaps this is to avoid redundancy with the illustrations for the purpose of saving space, but the result is rather weak and uninformative text. Here is the description of Stilt Sandpiper: "In flight has inconspicuous white bar on upperwing and white rump, feet project well beyond tail." That's it! The remaining text describes the bird's call and preferred habitat.

Range maps are in a separate section at the end of the book - old Peterson style. That format has always driven me crazy, all the flipping back and forth...

I will say something positive though - the illustrations are of fairly high quality. They are, for the most part, detailed, accurate, and pleasing to the eye. The problem is that only adult plumages are illustrated. That's right...no juvenile shorebirds or immature gulls! Good luck identifying those groups with these books.

Unfortunately those illustrations that are included on each plate are often poorly organized. The images are crammed together with numbers to represent each species, and they are packed so tightly on some plates that you have to look closely to figure out which numbers refer to which illustrations. Too much work for too little information.

So, overall, I would not recommend this two-volume set to most birders. If you want a checklist, buy or print a two-page checklist for little/no cost (because you won't find one here!). If you want a field guide, invest in a comprehensive one. These hybrids just don't do it for me (that's something you won't hear me say often!).

To whom might this book be useful?
Perhaps for a beginning birder? I have heard it argued that simplicity is desired for beginning birders; that less can be more. But I generally disagree with this because I believe this leads to more misidentifications than anything. Withholding certain complicated information may be beneficial to the novice, but to leave out illustrations of immature birds is just making things more confusing IMO.

These books may work for a traveler to the region who does not plan on birding but still wants a small reference with basic ID information for whatever they see along the way. Their small size makes them easy to travel with.

Please read more reviews on these books before you judge them. I was surprised to see that the reviews on Amazon were generally favorable. So obviously they work for some folks, just not this one.

Back in the summer of 2007 I began to piece together an article, later published in The Connecticut Warbler, that attempted to predict (AKA 'guess') the next 15 bird species to be added to the CT state list. Now that we're six years out, it's time for another look back.

The "research" included assembling a 13-member panel to submit their own Top Ten Lists, ranked from most (10 pts) to least likely (1 pt). A total of 47 species received votes. Here they are (since recorded species in bold):


*NOTE: A 1986 record of Ivory Gull, originally rejected, was recently reviewed and accepted by the ARCC. However, nobody included Ivory Gull on their lists anyway (note that this was before the recent rash of lower 48 IVGU sightings).


You'll see that several of those birds were not even mentioned in the predictions!

For those keeping score at home, Danny Williams currently holds the title of king prognosticator, having hit on 3 of the 12 new species. Well done Daniel.

It is interesting to see how perception has changed over the past six years. Looking back, a few birds really stand out. First, White-winged Tern is higher on the list than you'd think, getting votes from nearly half of the panel. This seems high because there are no recent regional records, despite several from 10-20 years ago. As far as underrated birds go, Common Murre (now with several records over the past few years!) and Black-bellied Whistling-Duck appear too low. In fact, if I had to redo my list today, I'd definitely put the duck in my top three as they continue to expand in the southeast and increase as a vagrant to the northeast.

Also of note, the four most recent additions to the CT state list come from the "seabird" category. The Band-rumped Storm-Petrel and White-tailed Tropicbird came thanks to Tropical Storm Irene. Tropical cyclones are a real wildcard, obviously impossible to predict in advance, but capable of bringing several first state records to the pelagic-poor state of Connecticut (we have a coastline, but we are blocked from open ocean by Long Island).

The murre is a species that winters in small numbers very close to CT waters, and has recently shown signs of becoming a regular winter visitor into far eastern Long Island Sound. Its appearance in CT should not have come as a great surprise. The Brown Booby was also not storm related (as far as we know), and came as a real shocker, despite a spike in sightings along the east coast over the past few years.

Please feel free to share thoughts on this. This was meant to be a fun project from the beginning and I find it interesting to look back on it every now and then.