February 14, 2013
I was able to spend a few hours yesterday afternoon at a landfill in the Research Triangle area of NC. Birds numbered in the thousands, dominated by Ring-bills. There were several hundred Herrings scattered through the masses, as well as a healthy number of Lesser Black-backed and a handful of Great Black-backed Gulls. The highlight came in the form of two first cycle GLAUCOUS x HERRING GULL hybrids. 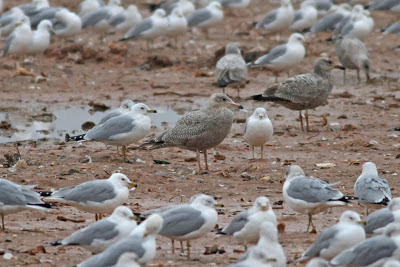 The second GLGUxHERG was more Glaucous-like in body plumage. In fact, when I first saw the bird from just the neck up, I thought I had found a Glauc. But it was easily ID'd as another hybrid by those brown primaries and tail. 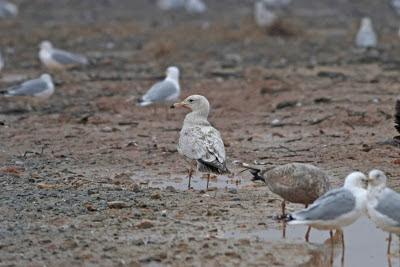 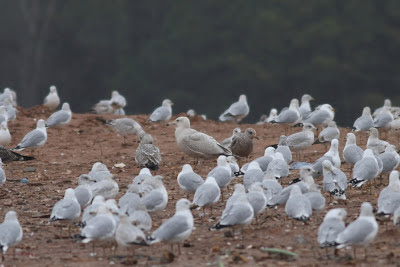 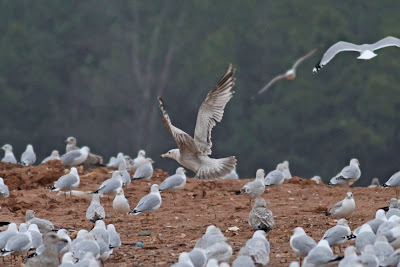 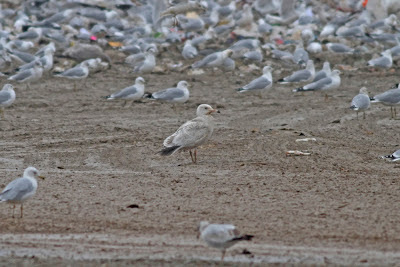 For comparison, here is a "white-winged" gull that appears to be a leucistic Herring Gull. The snow white primaries and overall white body plumage suggest a white-winged gull such as Glaucous, but the bird's size and structure seem spot-on for Herring. Also, note the dark brown tail and seemingly randomly placed pigment in some of the upperpart feathers including the tertials. It's not easy to age a bird like this, but given its slightly paling eye, thick black ring on the bill, and other features such as an apparently dark tail and barred undertail coverts, I would guess the bird is in its second cycle or thereabouts. 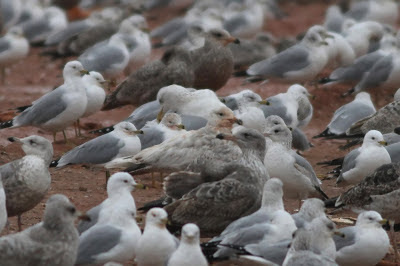 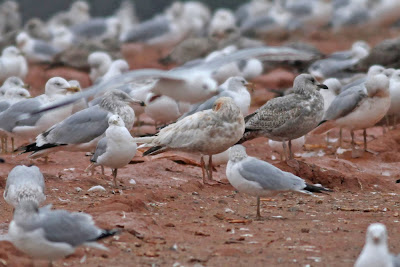 The number of Lesser Black-backs was impressive, with a one-time count of 22 in view at once. I picked that moment randomly, and it was my only count. Who knows how many were there...30, 40, more? A repeated, dedicated count, especially by age class, would reveal a more accurate (and higher!) number. 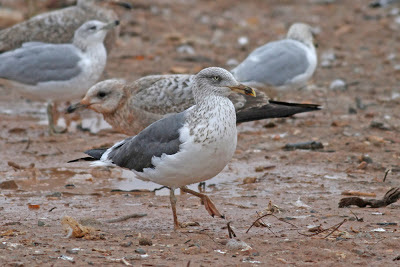 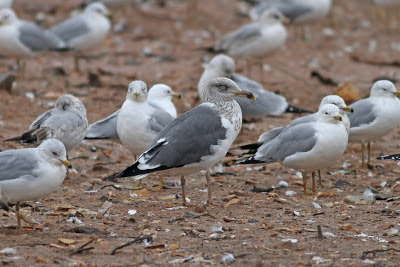 Not terribly exciting to someone from Connecticut, the "rarest" species of the day was Great Black-backed Gull, with at least 5 being seen (adult, second cycle, and 3 first cycles).


I spent nearly 3 hours there yesterday but am already itching to get back. That'll have to wait until next winter though. The gulling was fantastic...much more interesting that I would have guessed inland NC had to offer. But the region has records of California, Thayer's, Iceland (several), and Glaucous (several) Gulls so it shouldn't have come as such a surprise. No pure Glaucous on this visit...just two mutts, but cool nonetheless.