February 08, 2009
*July 14, 2009 UPDATE:
Some important changes with the iPhone since my initial review:
- 'Cut & Paste' functions have finally been added via a software upgrade!
- A new iPhone, the 3GS, has been released. It is priced the same as the 3G originally was. The 3G price has been cut in half.
- The new iPhone 3GS is capable of video recording and has an upgraded camera, so my negative comments about the camera may not apply to the new version.
- The new iPhone 3GS doubles its space from 8GB to 16GB.
[end update] 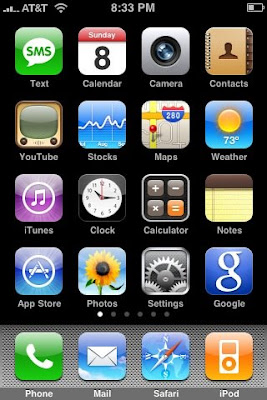 I purchased an Apple iPhone back in September as my required smartphone for school. Recently a few folks have asked me about its use as a birding tool. In short, I love it. It's not without its problems, however. Here's an honest review, cons first:

CONS:
- ***Important to remember*** The use of many of the phone's features (email, internet access, etc) is dependent on cell phone coverage. If you're in the middle of nowhere without coverage, these important features are useless. Of note, this all changes if you are within range of a wireless internet router (but that's not likely if you're in the field!).
- No Adobe Flashplayer compatibility. So although you have "full internet," any web pages with Flash-powered animations cannot be seen. I haven't found it a problem at all to be honest, but still worth noting.
- Battery life is DECENT, but no better. Not surprising, because the screen is so large and bright. I usually go ~2 days before having to charge it, but the full battery can be used in one day if you're constantly using the device (especially the GPS function). Getting a car-charger is a great idea in case you get stuck with a dwindling battery during a full day of birding.
- The current "electronic field guides" available for purchase are, in my opinion, pretty weak. They are not nearly as detailed as the books. The one upside is that they generally come with song clips included, which is obviously nicer than reading a written description of a song!
- The GPS does NOT have voice directions. While definitely useful when you need it, its not as safe as a 'real' GPS unit because you have to keep looking down at the screen to see your next turn.
- The built-in camera is nothing good. I never use it, as I imagine 'phonescoping' would not be very successful....but I've never tried.
- ***Warning*** International roaming and data fees, as one might expect, are outrageously high (at least with your basic AT&T plan). Thanks Roy for pointing that out to me!

PROS:
- WiFi (aka wireless internet) connectivity, for blazing fast internet when within range of a router.
- 3G speed is pretty impressive
- Email
- Internet (check any listserv archive anytime you want, not to mention the zillion other things you can do on the internet....). You can also save images from the internet to your phone for future viewing.
- GPS linked to Google Maps (including Satellite view...plus Google Earth is a free App) 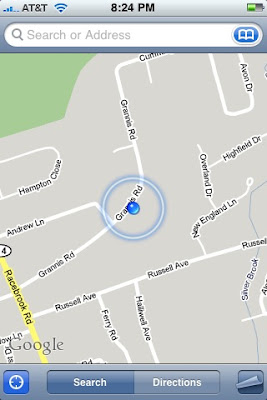 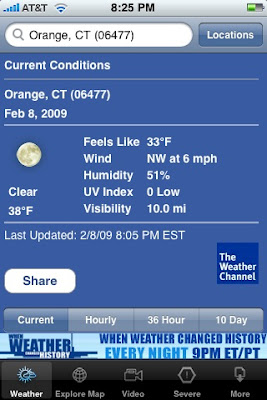 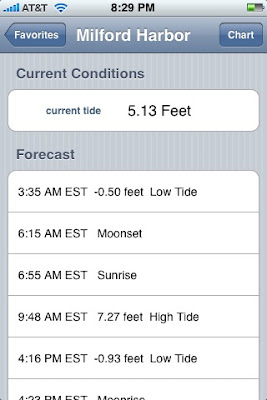 - iPod WITH BUILT-IN SPEAKER (Store all your bird calls on the phone. You have 8GB of total space, which is plenty. Speaker volume isn't half bad for its size, even useful in quiet conditions.)
- Ability to send files (docs, pdfs, etc) from your CPU to your phone, so you can store/use your files from home on the phone
- Apps that locate nearby restaurants, cafes, banks, gas stations, drugstores, motels, etc by using the GPS function to locate you...then filtering results by distance from you.

Some EXAMPLES of my uses in the field:
- In Nov I was at Lighthouse Pt when I checked my email and saw a report of a Barnacle Goose in Wallingford. I plugged the street name into the GPS and immediately had directions (the GPS locates your phone and provides directions from wherever you're standing). When I got to the lake, the bird was not there, so I used the satellite view on Google Maps to locate nearby farm fields and reservoirs to check. Meanwhile, I was checking my email and the listserv online to see if the bird had been refound while I was searching the area. 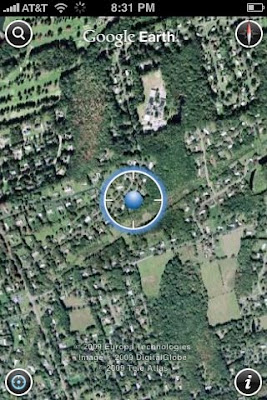 Google Earth, free on the iPhone
- I was able to provide updates on the Slaty-backed Gull on the day it was found, right from the landfill. In just seconds I'm able to post to CTBirds.
- While taking a ferry from New London (CT) to Fisher's Island (NY) we saw a few Razorbills. We were interested in rarities for our CT list, so I flipped on the GPS function and recorded our position when we viewed the birds. I could immediately see that we were in CT waters (with state lines drawn across the water), plus our coordinates. You can save a waypoint with the tap of the screen.
- Hungry after a long day's birding out of state. Felt like Chinese food. Used one of the free Apps to locate the nearest takeout. Delicious.
- Using radar to track incoming weather (i.e. bands of rain while seawatching, location of storm cells while doing a big day, movement of the of the rain/snow line, etc)
- Though I rarely tape birds except on big days (not that I'm against it here-and-there!), I have used the built-in speaker with some success in the field. More powerful than you'd think given its tiny size, but purchasing a portable speaker is necessary.

The iPhone is carried only by AT&T, and it costs $200 as long as you aren't already in the first year of a contract with AT&T ($400 if you are). The monthly charge varies with your desired plan.

In summary, I love this thing. Pros FAR outweigh the cons, none of which are deal-breakers. It constantly comes in handy while birding. However I am not an expert on these devices, so I have no idea how the other new smartphones compare to this one. The one thing I do know is that the App Store is exclusive to the iPhone, and plenty of incredibly useful and creative Apps are available for birders, nearly all of which are free or just a couple bucks each. New Apps are released everyday, and developers are just catching on to the abilities of the phone.

There are many, many, many fantastic non-birding uses too.