Preparation: We had set our date a week in advance as it was the only day all of us were available. Fran and Dave were able to do a fair bit of scouting the inland portion of the route. Frank, Patrick, and I were exceedingly busy and could only spare a few hours here and there for scouting coastally.

Summary: We met at 11pm at a Dunkin Donuts in Cromwell, all geared up for 24 hours of birding. Few things in life get my adrenaline going more than the few hours before the start of a big day. Our nighttime route included inland marshes and grasslands, where we were able to pick up some common rails, owls, and grassland breeders (including Upland Sandpiper and Grasshopper Sparrow singing at night!).

From here we were at the mercy of Fran and Dave, who strung together a fantastic inland route. While we missed some birds, we did pretty darn well. Before we knew it we were headed for the coast with 130 species.

I had crunched some numbers the week before and figured that if we left the NW with 137 species, we had a really good shot at the record. When we left with 130 I took a quick scan through the list and realized that the record was still a possibility, but we were going to have to get nearly everything on the coast. Still, this was very exciting for me, as I had never before reached the coast with the record in sight. 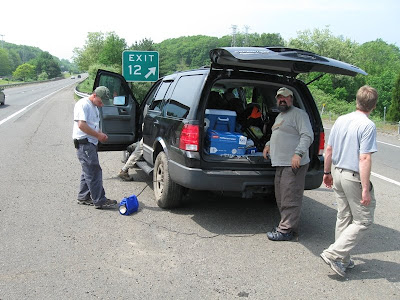 Gallo, back away from the cooler for two minutes and give us some help please!
Forty-five minutes later we were back on the road and all-of-a-sudden in panic mode. We knew we lost valuable time (something that wouldn't be fully realized until later on); we reached Bridgeport and quickly got the nesting Peregrines. Hey, maybe we didn't need that 45 minutes after all!

Then we went to Stratford... Stratford was, in a word, slow. Even the birds we did get in Stratford, like the lingering Glaucous Gull, took a while. Milford Pt was also disappointing, mainly due to the tide being much lower than anticipated. The heat haze was so brutal that we had trouble scoping the sandbars. Still, we got the expected stuff.

Once we got further east, things picked up a bit. Guilford and Hammo netted us some new birds including wonderful lingering waterfowl. We got Brown Thrasher at Willard's Island before the skies opened up. It rained steadily for a good hour, costing us more precious time. We could have gotten away with showers, but this was a steady (often heavy) rain with a good deal of thunder and lightning.

The day ended without us adding any new birds, despite trying for a few we really needed. Night session #2 got us a migrating Gray-cheeked Thrush but nothing more. Final tally: 177.

Analysis: There is obviously much room for improvement here. First and foremost, improved scouting, especially coastally, would have served us well. Also, ideally I would like to go on the 21st or 22nd of the month...a few days can make quite a difference at this time of year. The flat tire and thunderstorms also cost us precious daytime birding. If we had an additional 1:45 at the end of the day I know of at least 3 species we could have easily gotten in the southeastern part of the state, which would have brought us to the 180 mark. Also, if we had arrived at the coast at or before high tide, we would have had a better chance at shore/marsh birds. We could have birded Stratford more efficiently (and we would have, if we had been able to appropriately scout it).

Overall I can't help but walk away feeling disappointed. We certainly could have hit 180, which would have made me very happy. But we didn't, and we fell 9 short of tying the record. Maybe next year.

But of course I had a great time. This is a very knowledgable and dedicated Big Day team that should challenge the record of 186 in the coming years as long as we keep trying (and we have every intention of doing so).