January 10, 2012
On Saturday afternoon a group of us visited the Windsor-Bloomfield Landfill. We had three really nice-looking "Kumlien's" Iceland Gulls (first cycle, second cycle, adult), but I found the gull photo'd below the most interesting of the day.

It's a first cycle "Herring" Gull. But it shows some features more in line with Old World taxa (perhaps European Herring Gull) than with your typical smithsonianus American Herring Gull.

The bird stuck out among the American HERGs of various ages by its frosty upperparts with thinly barred first-winter scapulars and checkered greater coverts. A closer look revealed pointy blackish primaries and a mostly black bill, and a blackish tail band of unknown width. Tertials were strongly notched laterally and had broad white tips distally. Undertail coverts barred dark and white, with white bars averaging wider than the dark ones. 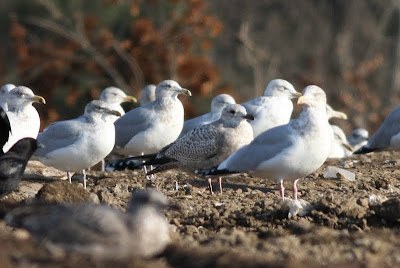 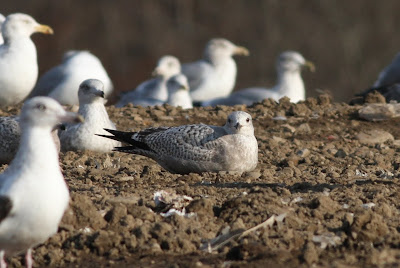 In flight, we see an obvious pale inner primary window. The inner primaries are strikingly patterned: dark distal anchors with whitish subterminal spots on either side of the dark feather shaft. Secondary bar is blackish and contrasts sharply with pale wing coverts. The only decent view we have of the tail is from underneath, which appears to show the presence of a tail band set of by paler/marbled bases to the outer rectrices. 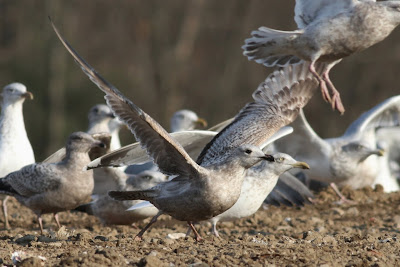 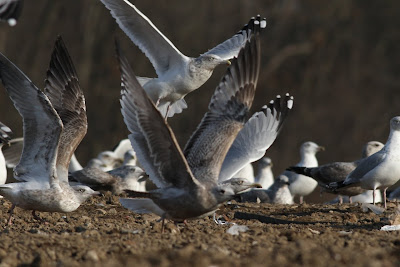 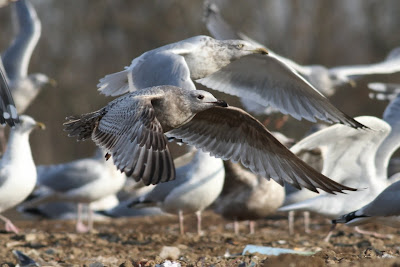 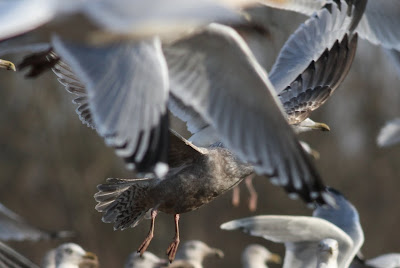 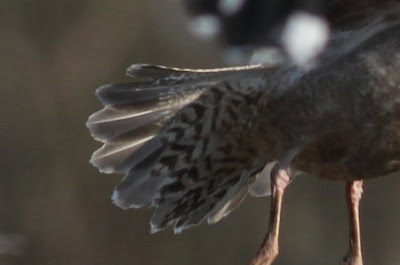 There are certainly some things at odds with typical European Herring Gull. These include rather uniformly colored underparts and presence of some dark coloration on the inner webs of the innermost primaries.

Yep, another unidentified first cycle gull. Interesting though. I wonder where this bird was hatched. Maybe someday we'll be able to put a name to these things. For now, we file them away into a growing folder, to be opened at a later date when I feel like giving myself another headache.

As always, comments are very welcome.