April 02, 2017
Virginia and I went on a quest to find her life SNOWY OWL, and the closest reliable bird(s) seemed to be along the New Hampshire coast. We targeted the Hampton Harbor area, where 1-2 Snowies had been seen recently. After an hour or two or checking marsh, beach, and jetty on both sides of the harbor, we stumbled across one perched atop a telephone pole along the main road to the south. Seemingly oblivious to passers-by, the bird kept a casual yet authoritative watch over its territory.


With our quest met with such success so early in the day, we figured we would target a few other birds in the area that we wanted to see. Also in the neighborhood was an adult GLAUCOUS GULL, a big bruiser of a male it would seem, that has been wintering here for several years now. Much like the Snowy Owl above, it seemed to lord over its favorite parking lot along the harbor front. 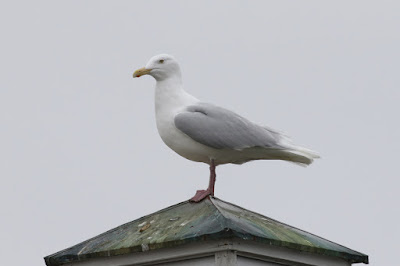 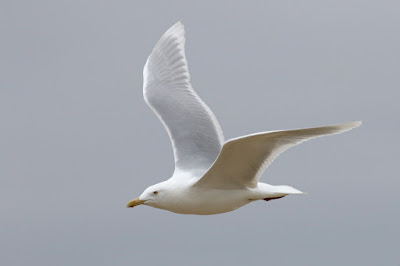 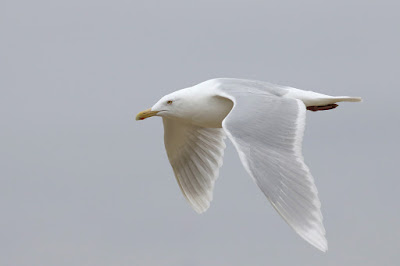 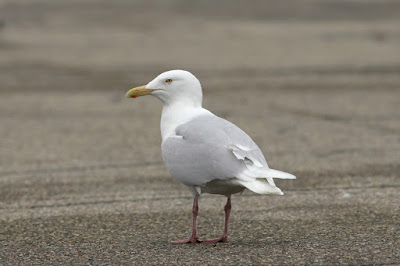 Our next move was to briefly jump over the state line into Massachusetts and drive through the campground at Salisbury Beach State Park, where RED CROSSBILLS had been seen in recent weeks. Without much effort we spotted a vocal flock of 18 circling over the pine-laden campground; we followed them until they landed and began to feed. 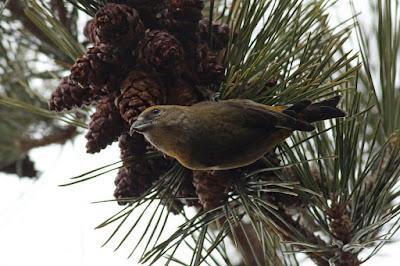 They were quite vocal, and I did record them. They sounded most like Type 10 in the field, but I have not analyzed anything yet. I will post later, or just amend this one, once I have.

It was not yet noon at this point, and the approaching rainstorm had not yet arrived, so we decided to
make a run inland towards the GREAT GRAY OWL that has been seen in southern New Hampshire for the past few weeks. We made a few detours along the way to search for Bohemian Waxwings, but we were unable to find any between the coast and the town of Newport where the owl was being seen. We were met with quickly deteriorating weather conditions in Newport. Luckily upon arrival we ran across a local birder/photographer who showed us exactly where the owl had been seen the previous night, which was key because the bird had moved around the neighborhood quite a bit since its discovery. We decided that with the worsening weather we would do two "loops" through the neighborhood before heading out. Not long before leaving we crossed paths with a few birders from Long Island and exchanged contact info, all of us aware that it would take some work to find the bird and we seemed to be the only ones looking. No surprise there - it was really starting to rain. Virginia and I were stopped for gas on our way out of town when the phone rang...they had found the bird where it was last seen the night before(!). It was still there, sitting atop a fence post, when we arrived.

The owl seemed unfazed by the rain and was clearly in hunting mode. It was actively searching for prey from that post. Something caught its attention at one point, and it flew to the ground, only to reappear on the post a few moments later with a massive vole in its bill. A quick stab to the back of the neck before tossing it down in one quick shot. Very cool to see.

We left the bird hunting happily in the rain.

Our afternoon search for Bohemians would be cut short by the heavy rain, but no matter. Have to leave something for next winter!