July 30, 2017
Falkner Island is a 2.87-acre island that lies about 3 miles off the Guilford, CT coast in the central basin of Long Island Sound. The entire island is part of the Stewart B. McKinney National Wildlife Refuge and hosts a large colony of Common Terns plus a few dozen Roseate Tern pairs. During each breeding season the island is manned by researchers/wardens who manage the island for the terns and monitor their breeding attempts.

On Friday, July 28th researchers Cedric Duhalde and James Heuschkel were thrilled and stunned to find an adult BRIDLED TERN on the jetty on the west side of the island among the Common and Roseate Terns. This is the second state record; the first came in 1992 (25 years ago!) from...you guessed it...Falkner Island. Bigtime kudos to James and Cedric for not only finding and promptly identifying the bird, but also for getting word out ASAP, along with some killer photos in their eBird report!

The problem for everyone else is...the terns on the island are just too far to identify from land, even in the best of conditions.

I was tied up at work in Waterbury until 3pm with no hope of getting out early. My boat is in Norwalk Harbor, an hour's drive from work and some 40 miles from Falkner Island. Sunset is 8:12pm. Logistically, it would have taken a minor miracle for everything to come together to even get a chance to see this bird. But, amazingly, everything that could have gone right, did.

I picked up my girlfriend, still unsure whether or not to even try to pull this off, but she was up for the adventure. So to Norwalk we drove, not hitting even a second of traffic. We made a seamless transition to the boat, and we were off. It was too last-minute to mobilize birding friends, so it would be just the two of us. Luckily the gas tank was full as we were about to cover come major ground. We hit the open Sound and were met with nearly flat water. A nor'easter was approaching from the south, and a Small Craft Advisory was due to take effect just 12 hours later, but the wind was forecast to hold off for a while. We received an update from Cedric, who informed us that the bird had not been seen since the morning despite their attempts to relocate. I could feel our chances slipping from slim to none, but we decided to press on. Sea conditions were still great, and we were really enjoying the scenic ride up the coast anyway.

We pulled up to Falkner around 6pm, having made just about record time. That would leave us about an hour of birding before we would have to turn back to avoid running after dark, with some time to spare for worsening conditions. As we arrived, we could see Cedric and James setting up to search the jetty for the tern. They were aware that we were coming to look for the bird, and they could not have been more helpful or forthcoming with information. The perimeter of the island was completely lined with terns, and there was a steady stream of birds coming and going. The occasional Roseate was seen or heard among the throngs of Commons. After just a few minutes, we saw the guys waving frantically and pointing towards the jetty just in front of them. We looked. No Bridled Tern in view. The island is off-limits to the public, for obvious reasons, so docking the boat and joining them on land was not an option.

Now shouting distance away, they directed us to view the jetty from their angle near the dock. Carefully navigating the boat closer to shore while avoiding contact with submerged rocks, we positioned ourselves in line with them, and Virginia was able to spot the bird atop the jetty. A tense moment later, I got on the bird too. 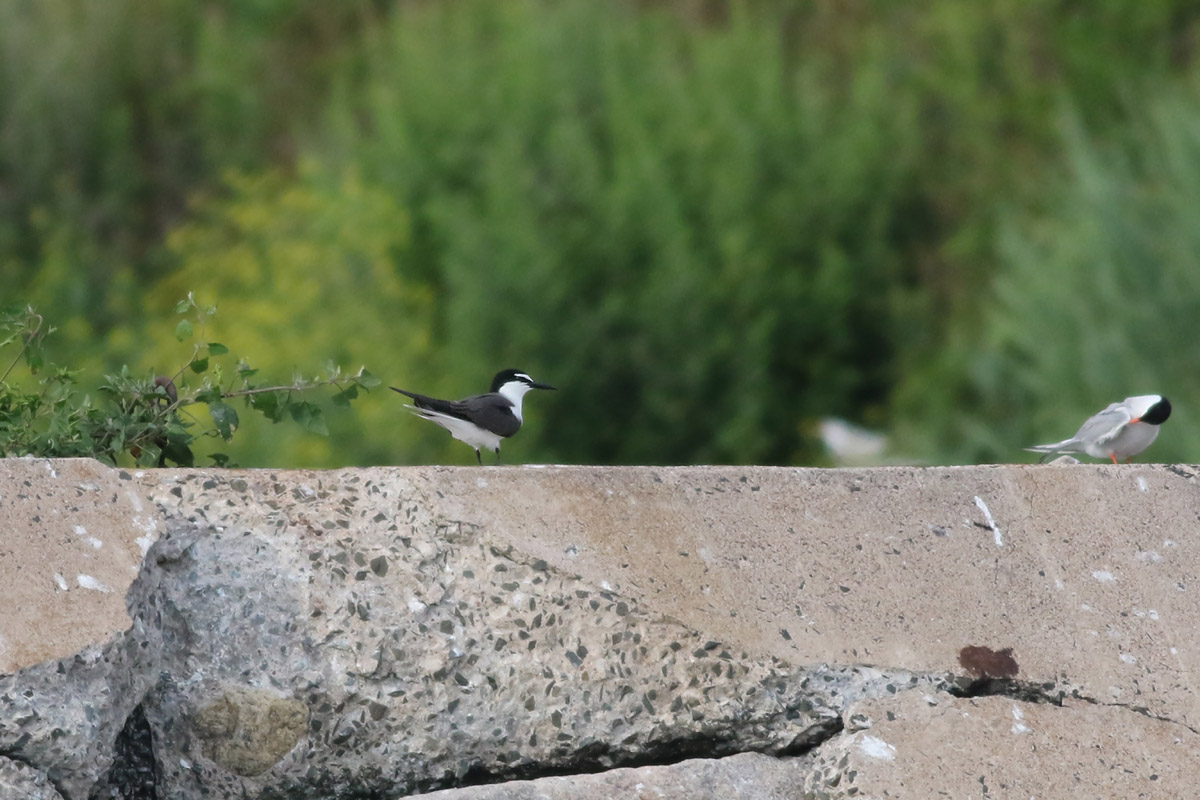 Beside ourselves and amazed with our luck, we enjoyed the bird for a few very exciting moments. I grabbed a few record shots. The subject bird did not appear settled by any means, and soon it began moving around the jetty. Moments later it took flight, strafed the breeding area, and disappeared over the hill towards the other side of the island. Gone! 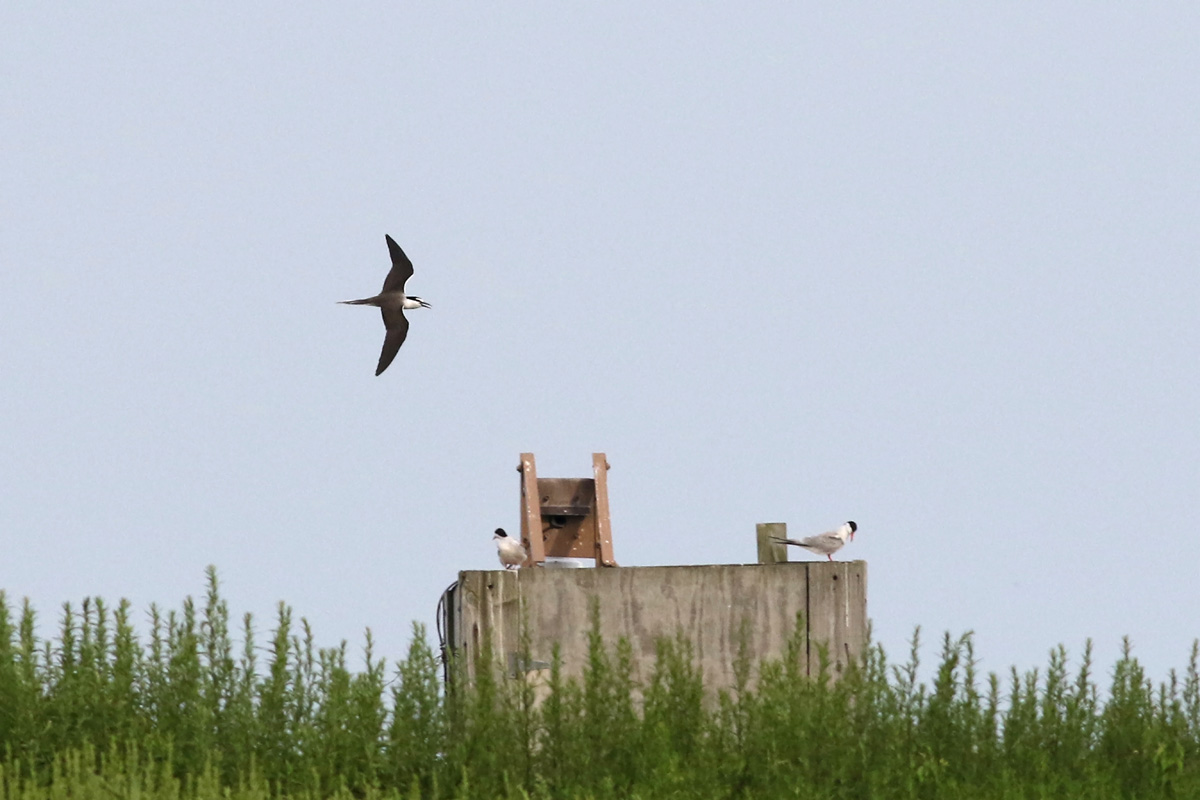 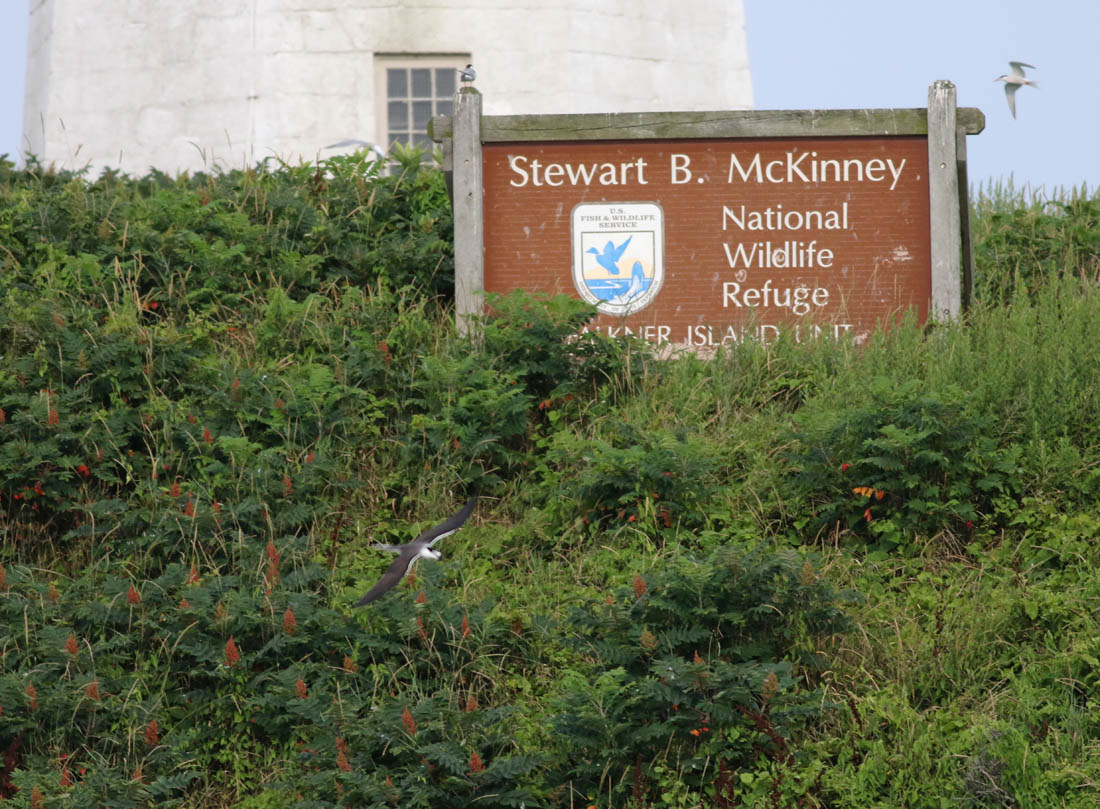 Meanwhile, friends Frank Gallo and Patrick Dugan were trying to scope the terns from the mainland, and not very successfully given the distance. I decided that we might have enough time to run them out for a quick look, so we gave that a shot. They quickly found a public dock in Guilford, and we met them there in 12 minutes or so. We returned to the island with only a few minutes to look, especially since the incoming clouds would reduce our twilight later on. The bird had not returned to its jetty. We stretched the limits of our allotted time, nearly circumnavigating the island, now giving ourselves no time to allow for slow-going if the water got choppy on the way back. Unfortunately we did not reconnect with the tern, and we dropped a disappointed Patrick and Frank back at the dock. They would not have another Brown Booby moment on this day. As we would find out later from the guys on the island, the tern did eventually come to its favorite jetty to roost for the night...

Virginia and I needed just a bit more luck to complete our evening, and we got it...in the form of continuing calm seas for the entire ride home. We had timed it perfectly, losing our last bit of twilight just as we arrived in Norwalk Harbor around 9pm. The GPS track put us at 99 miles (!) from dock to dock.

Congrats to Cedric and James, and huge thanks to them for reporting the bird so promptly. That nor'easter skirted the region on Saturday, making for unsightly boating conditions. There has not been any more word from the island, yet, on whether or not the bird was seen on Saturday.