January 05, 2019
For three out of the past four years, I have been lucky enough to participate in the Nantucket Christmas Bird Count with my fellow CT birders that have done the Madaket section for years now. I owe Frank Gallo for urging me to join the team for several years before we were finally able to make it happen back in 2015. My previous two trips had been rather brief - essentially out and back for the count itself. This year Allison Black and I were able to spend nearly six days out there, participating in both the Nantucket and Tuckernuck counts.

Allison has done the Tuckernuck count a few times now, and after my first visit to the tiny island over the summer, I was eager to see the place in winter. We left Connecticut early on Boxing Day and took the 9:15am ferry from Hyannis to Nantucket. Onboard we met up with several other CBCers that were also Tuckernuck bound.

The ferry can be quite birdy, though this journey seemed to have fewer sea ducks than I had experienced in the past. Scoters, Eider, and Long-tailed Ducks can be present by the thousands, but today counts were held in the triple digits. RAZORBILLS, however, were in good supply. This mirrored the concurrent inshore flight of RAZO that had been going on for a couple weeks along the RI/CT/NY coasts. We tallied nearly 50 individuals. The best bird of this leg was a first cycle GLAUCOUS GULL that Allison spotted as it zipped overhead.

That afternoon we shuttled directly over to Tuckernuck for the ensuing day's count. The channel between the two islands was absolutely loaded with some 15k COMMON EIDER and several hundred BLACK SCOTER. The skies filled with plump waterfowl as we bisected the main flock. 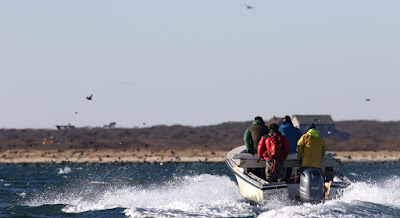 We had a bunch of gear and food to haul to the mostly winterized homes that would shelter us for two nights. Good thing we had the use of golf carts to get around. A mid-afternoon walk resulted in very few land birds, though an EASTERN PHOEBE was a nice get (and would be re-found on count day).

Count day itself brought a brisk wind out of the NW, but the day was beautiful otherwise. Our crew started out with a sea watch from the Whale Point area that was productive. We had a bunch of Razorbills, and I got on a THICK-BILLED MURRE a bit too late for the rest of the group to see well. Gannets were scarce but we did have a few, and a handful of KITTIWAKE was a highlight. Towards the end of the day we did have two SHORT-EARED OWLS...always a treat, but perhaps a record low CBC number for this rapidly declining species in New England. Two "IPSWICH" SAVANNAH SPARROWS were hanging out in the dunes with the Short-ears.


The other groups pulled out such goodies as ORANGE-CROWNED WARBLER and EASTERN MEADOWLARK. Land birds, overall, were very scarce. Perhaps a lack of food on this island this winter. I personally noted very little fruit or seed, though I have no context on what constitutes a normal winter on that little island.

After compilation that night, Dick Veit called in a NORTHERN SAW-WHET OWL for the group.

On Friday morning we departed Tuckernuck first thing, as a strong storm was rolling in. A heavy rain and gale were expected for the afternoon. Luckily we escaped successfully back to Nantucket before it really kicked into gear. A hot breakfast at Island Kitchen was enjoyed by all!

Motivated to sneak in some birding before the shitty weather was scheduled to arrive, several of us drove to the southeast corner of the island in hopes of a seabird movement or gull show. We were met with strong wind, rain showers...and very few birds. Three of us decided to continue for a bit longer, and we found a nice lee at the Erosion Control Project overlook. The rain broke for a while, and between here and Codfish Park we were rewarded with two DOVEKIE and a possible hybrid Lesser Black-backed x Herring Gull. This is also the HARLEQUIN DUCK stronghold of the island, and we managed to find seven.

Later that day, Frank and Julian (part of our Madaket crew) arrived on island. We birded around the island on Saturday, starting with Low Beach. This year I was really keen on experiencing the famous Low Beach gull extravaganza. Well, not this year, folks. Gulls of all sizes were mostly absent, with just a smattering of a couple hundred large gulls along this stretch that is known to host thousands during winter. Even the volume of loons, grebes, ducks, gannets etc was way down compared to the usual. Still, it was better than what we see here in Connecticut :)

After checking some thickets without much to show for it, we went to see the returning drake TUFTED DUCK on Long Pond that was part of a fantastic Aythya flock. Represented among the couple hundred birds were Tufted Duck, both scaup, Canvasback, Redhead, and Ring-necked Duck.

The day was completed by a SHORT-EARED OWL at Barlett's Farm.


Sunday brought the Nantucket CBC. Our crew of Frank G., Mike C., and Julian H. scored NORTHERN SAW-WHET and BARN OWL before dawn, when Spruce B. and I joined them for the rest of the day. I'll spare you the play-by-play, but suffice to say the weather was spectacular, and the birding was nearly as good! We had temps into the 40s with a light north wind and high overcast that cleared for the afternoon. Asking for better would have been unreasonable.

Team Madaket highlights for the day included an "AUDUBON'S" YELLOW-RUMPED WARBLER (split them already!), a very late PIPING PLOVER, and the continuing TUFTED DUCK - quite a trio for our section.

Our team ended up with some 85 or so species, if I recall. The island total for the day was 134 and included, in addition to our rarities, YELLOW WARBLER, WHITE-EYED VIREO, WHIMBREL, and NORTHERN SHRIKE.

All the credit for the success of this count goes to Edie Ray, who managed to organize and compile the event per usual despite being excessively busy otherwise.

We would leave the island on Monday's noon ferry, but not before bagging a couple more goodies! Mid-morning we chased a pair of EVENING GROSBEAKS that were coming to a backyard on the east end of the island. And on the ferry back, we nabbed an adult male KING EIDER just inside the count circle...a species that had been missed on count day itself.

Although the Low Beach gull extravaganza never materialized, our trip was outstanding. The weather was mostly fantastic, the social scene was better than ever, and of course the birds did their part too. Here's hoping we'll be able to participate again next year.