February 15, 2019
I've spent a bit of time looking for Golden Eagles in Connecticut this winter. Nothing crazy - a bit of scanning here and there along the lower Connecticut River and the "Northwest Corner" of the state. Golden Eagle is a scarce bird in Connecticut. You've automatically had a good day in the field if you've seen one. Most birders find this species during its somewhat narrow autumn migration window, Oct-Nov, when a handful are seen at each of CT's two headlining hawk watches. Quaker Ridge averages 8 per year, while Lighthouse Point averages four. So, if you pick the right weather during their migration peak, you have, at best, a decent chance of viewing one.

Golden Eagles do winter in Connecticut in small numbers, though I get the feeling that not many folks are specifically seeking them out at that time. The two parts of the state I mentioned above, the lower CT River and the NW Corner, probably give you the best chance of finding one.

I have seen a handful along the lower CT River, particularly in February, after one or more deep freezes, when wintering eagle numbers peak. Back over a decade ago, Connecticut Audubon Society used to put on an Eagle Festival based in Essex each February, which really sparked interest. It was during those years that this stretch of river received a lot of coverage and, not surprisingly, a surge in Golden Eagle sightings. According to my records, I saw Goldens during February of 1999, 2001, 2002, 2003, and 2006 (two immatures together). One of these days I'll get those sightings into eBird. I've done precious little searching since those Eagle Fest years.

Before this winter, I hadn't specifically looked for them in the NW Corner (AKA Litchfield County). Recently I've spent a few hours scanning ridge lines, farm lands, and waterways between Salisbury and Kent. I had my first bird yesterday, in Kent, some 10 miles as the crow flies north of where Stefan Martin had two Goldens a couple days ago (in Sherman, CT - northern Fairfield County). Mine was an adult/subadult; the only obvious pale area on the bird's underside was at the base of its tail, and that was not strikingly white as you see in first years. Its tawny nape was not as striking as on some. The napes of some birds can be so pale that they appear whitish in the right light. Both of Stefan's birds, seen together, were also adult types.

eBird, of course, does not tell the whole story, but it serves as a very useful tool, particularly for recent sightings. It nicely illustrates those two parts of the state with clusters of reports. Below is a map of all Dec-Feb sightings from the past 10 years. I have circled in yellow the two clusters: the lower CT River at bottom right, and the NW Corner near center of the screenshot. 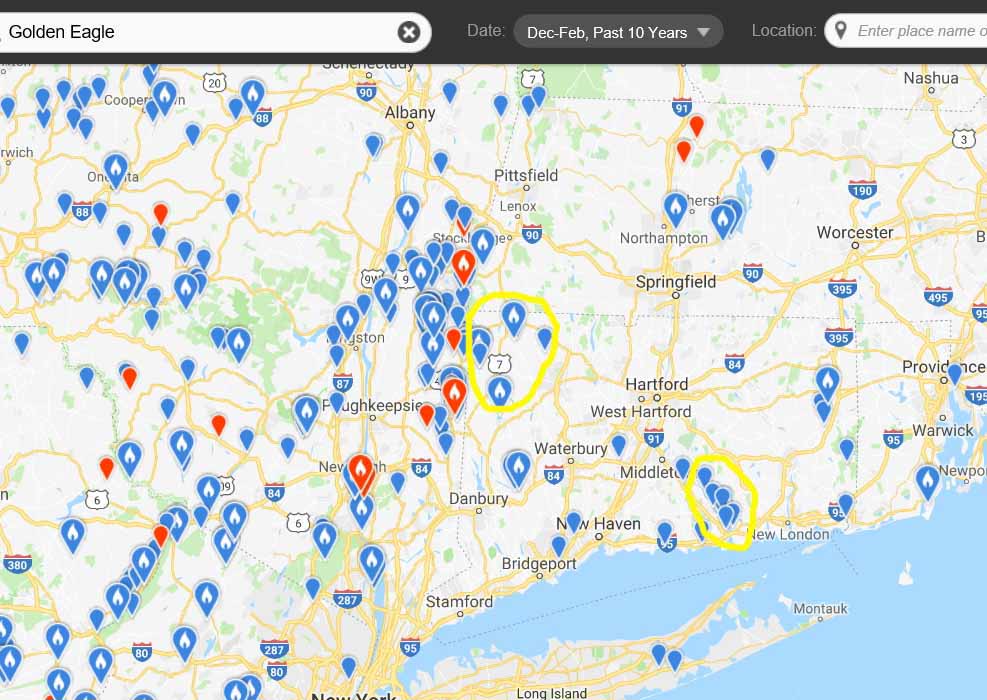 When you zoom in more closely to the NW Corner on the map below, you see the dashed state line a bit better, which runs north-south. That's CT and MA to the east of the line, and NY to the west. You can see that MA sneaks into the top right corner of the map, bordering CT to the north. Oh, and that's the Hudson River to the west. 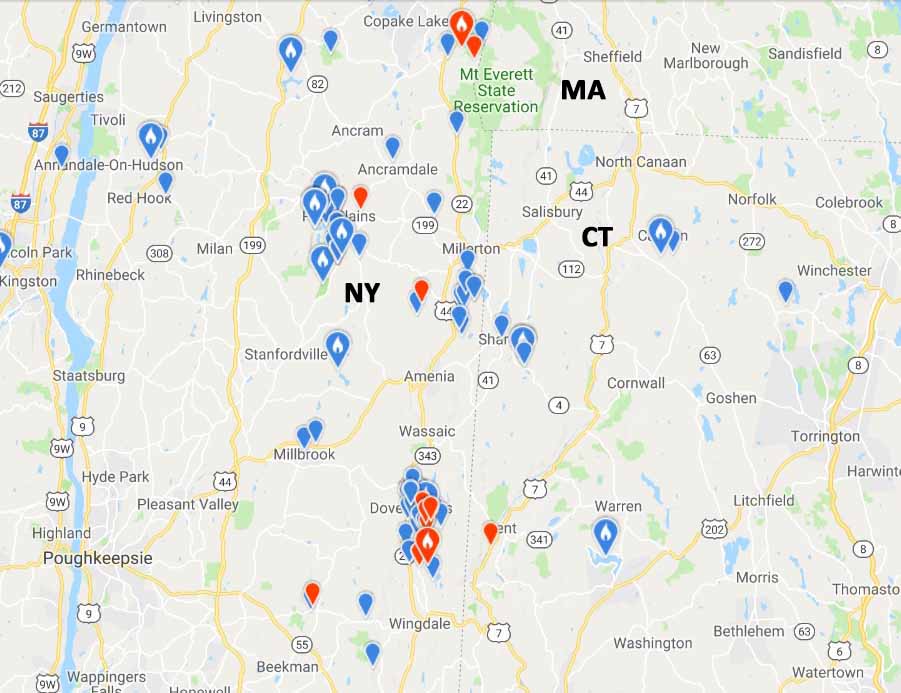 You can now see, in the above map, that there are only a handful of pins in Connecticut. But there are a few significant clusters in nearby New York.

It is clear that there is a small but recurring wintering population here. Those pins span a period of several years. They really start to explode in the winter of 2014-15, but I do not know if this is a function of 1) increased eBird usage, 2) increased birder awareness, or 3) increasing winter population...or some combination of those three. Either way, this is a Thing. If you delve into just this winter's reports, you'll see notes and photos that even include a few multiple-bird sightings from the bigger clusters. Sometimes two adults, sometimes two immatures, sometimes one of each. So we're talking at least a few birds per cluster. Just how many individuals winter in that region? How much ground do they cover?

Taking a close look at terrain and satellite views, there appears to be a preferred combination of habitats. They seem to favor the steepest hillsides that border valleys with farm land. To those familiar with this species' haunts where they are more common, such as in the western United States, this will come as no surprise. Golden Eagles are at home near steep, rocky mountains and hills. The agriculture may play a role, too...perhaps to serve as fertile hunting grounds.

You can begin to appreciate this from even a wide-angle terrain view. Note the clusters adjacent to the steeper ridge lines. 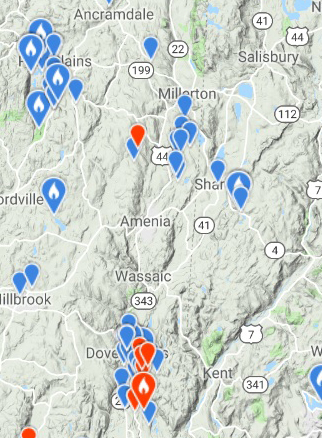 We'll zoom in to each of the three main clusters from north to south: Pine Plains, west of Sharon, and Dover Plains. 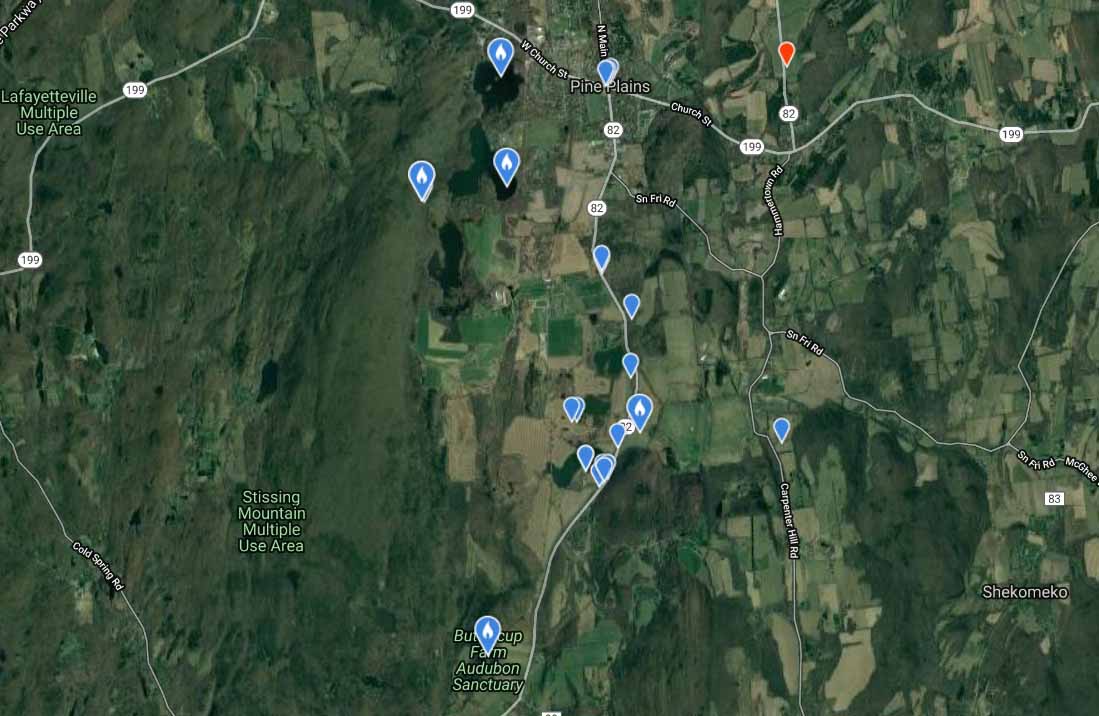 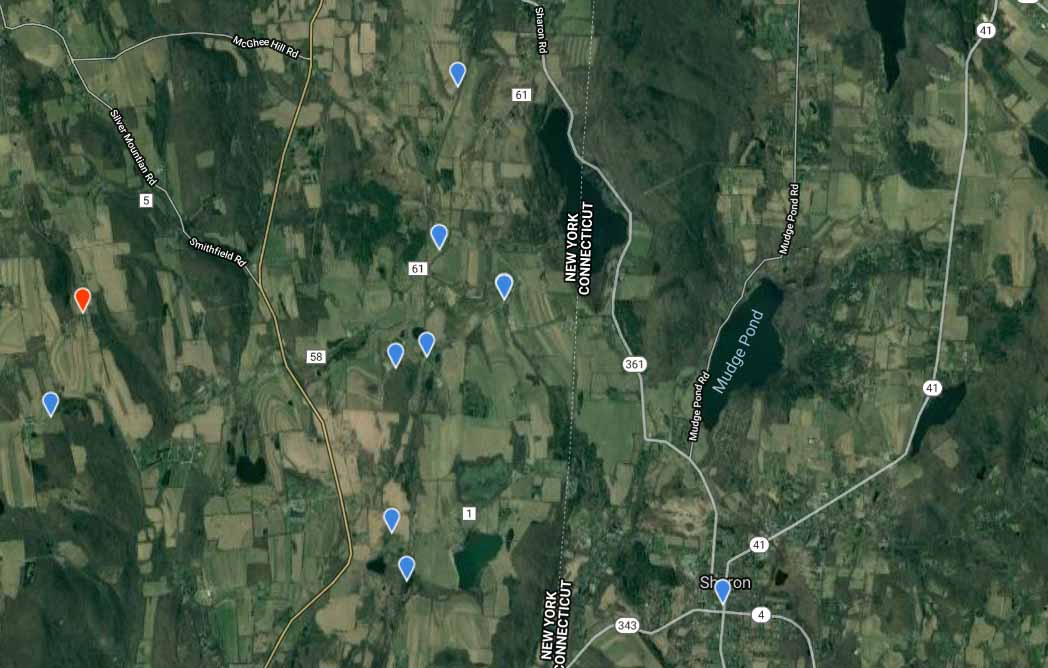 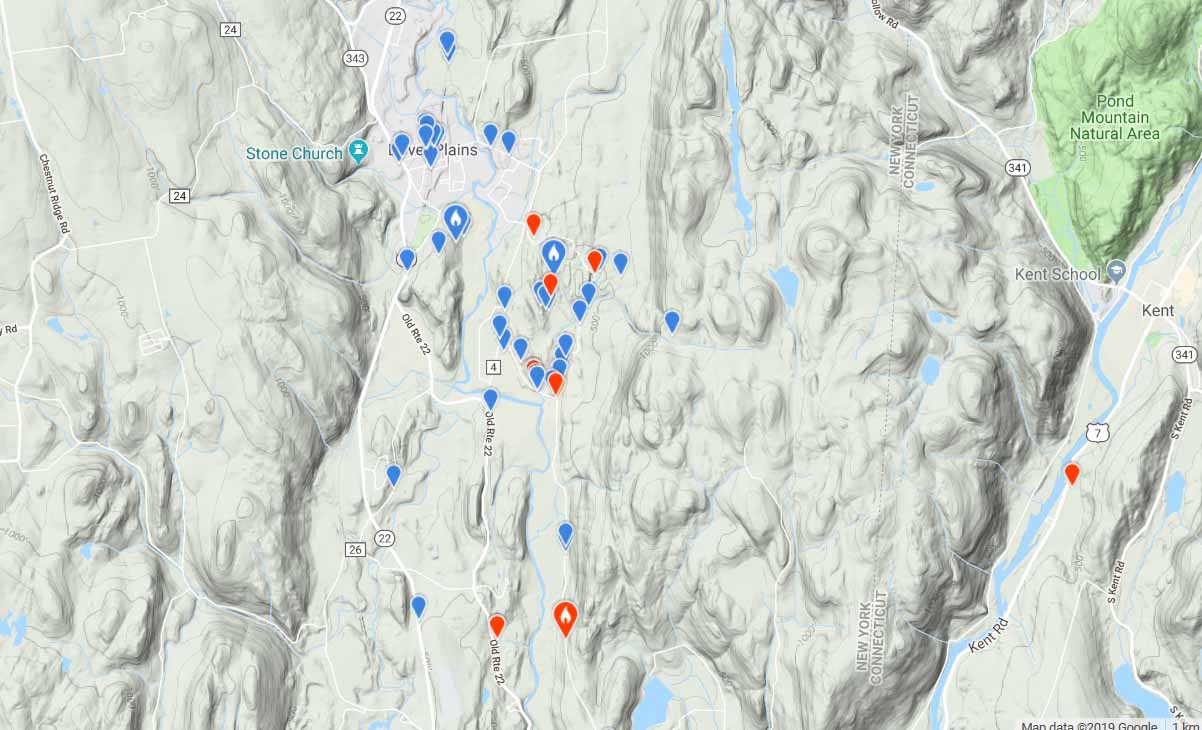 Armed with this knowledge, I think it would be worthwhile to spend more time searching for Goldens in western CT over upcoming winters. What would we turn up with regular searching? Perhaps some reliable winter locations on our side of the border?

Maybe even an organized search party, spread throughout good habitat, would be worth trying sometime.

Yesterday I picked a sunny mid-morning to set up watch in Kent. I timed the morning's raptor lift-off well. There were nearly always soaring birds to look at, between the local vultures and Red-tails. In my hour-plus watch, I tallied seven species of raptor/vulture and added an eighth later in the morning. As someone who enjoys hawk-watching anywhere, this was a great way to spend a late-winter morning. I highly recommend it for those going through raptor migration withdrawal. Again, I think a coordinated effort one of these winter days would be fun.

As an aside, historically Under Mountain Road in Canaan, CT was a dependable spot for wintering Golden Eagles in NW CT. During the 90s there were sightings during most winters. It fits that profile of a valley sandwiched between two steep ridges.


There is indeed some nice Golden Eagle habitat in this part of the state, and there are likely a couple birds hiding out there on a regular basis.