Back on December 18, 2019, while helping a friend chase her life Pink-footed Goose in neighboring Rhode Island, we spotted two Cackling Geese that had been reported in the flock. Those two birds were pretty much attached at the hip. One was a bog standard Richardson's, being frosty-backed with a squared-off head and tiny bill. The bird next to it, which admittedly I didn't study for long, was certainly darker-backed and didn't have quite the same squared off head. Still, it was likely another Richardson's, but we were distracted at the time by the Pink-footed and a third Cackling Goose that proved to be much more interesting.

Cackling Goose #3 was on a different end of the flock and really stood out in that it didn't really stand out. Yes, it was smaller-bodied with a short bill. It was clearly a Cackling Goose. But it did a much better job of blending in with the flock than a Richardson's CACG would have. While switching between scope and camera I would often lose the bird for a little while.

Its upperpart pattern was rather muted, lacking the high-contrast pattern we see from Richardson's. For a Cackling Goose, it was on the large end of the scale. Most interesting, though, was the head/bill profile. The head was exceedingly rounded, a feature accentuated by the short bill that had a broad base. In profile, the forehead sloped almost seamlessly into the base of the bill. All of this is classic Taverner's Cackling. This structure held up throughout the observation and was not posture-dependent.

Subspecific ID of white-cheeked geese is fraught with difficulty, but Cackling Geese are easier than Canadas. Mlodinow et al wrote a nice piece on their separation in 2008 (North American Birds), though new information will continue to come to light regarding the taxonomy and ID of these birds. We still have a lot to learn, it seems. 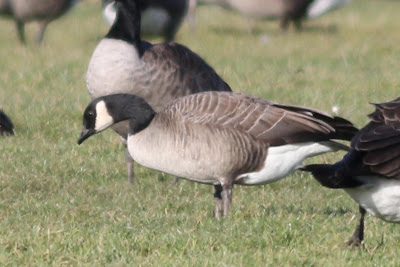 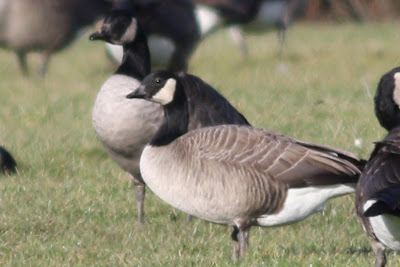 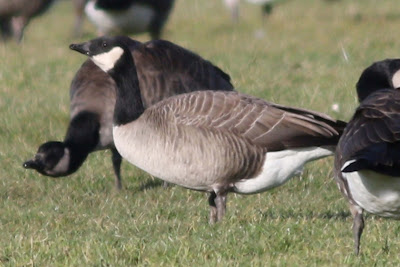 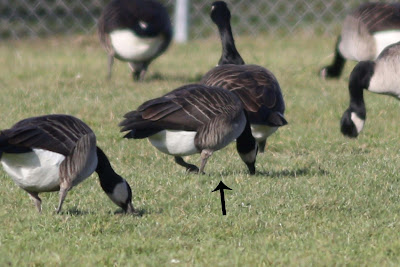 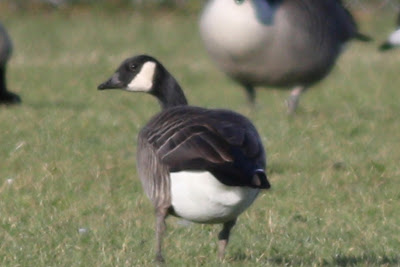 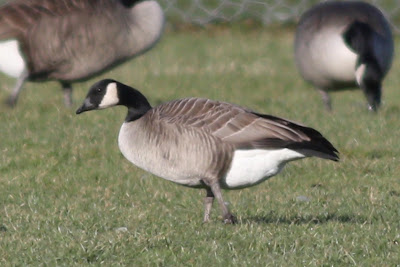