Birding the Oldest Desert on Earth

March 15, 2020
I am recently back from co-leading a wonderful two week "Birding Safari" to southern Africa with the Connecticut Audubon Society, in tandem with Nature Travel Namibia. I'll follow with a trip report sometime soon. After the group departed I spent two days on my own in Walvis Bay, Namibia, which is without a doubt one of the top coastal birding locations I have ever seen.

When you think of the desert, chances are that jaegers are not the first birds that come to mind. Nor would you expect thousands of shorebirds, terns, or flamingoes. How about fur seals and range-restricted dolphins?

The iconic Namib Desert is the oldest in the world. Its dramatically tall sand dunes stretch as far as the eye can see. It may come as a surprise that much of this desert is coastline, spanning the entire coast of Namibia (and a bit into Angola and South Africa), where it meets the South Atlantic Ocean. I am fascinated by the obvious contrast inherent to coastal deserts. How can such a parched environment literally stand adjacent to miles and miles of water. And yet this goes on for some 1,200 miles. 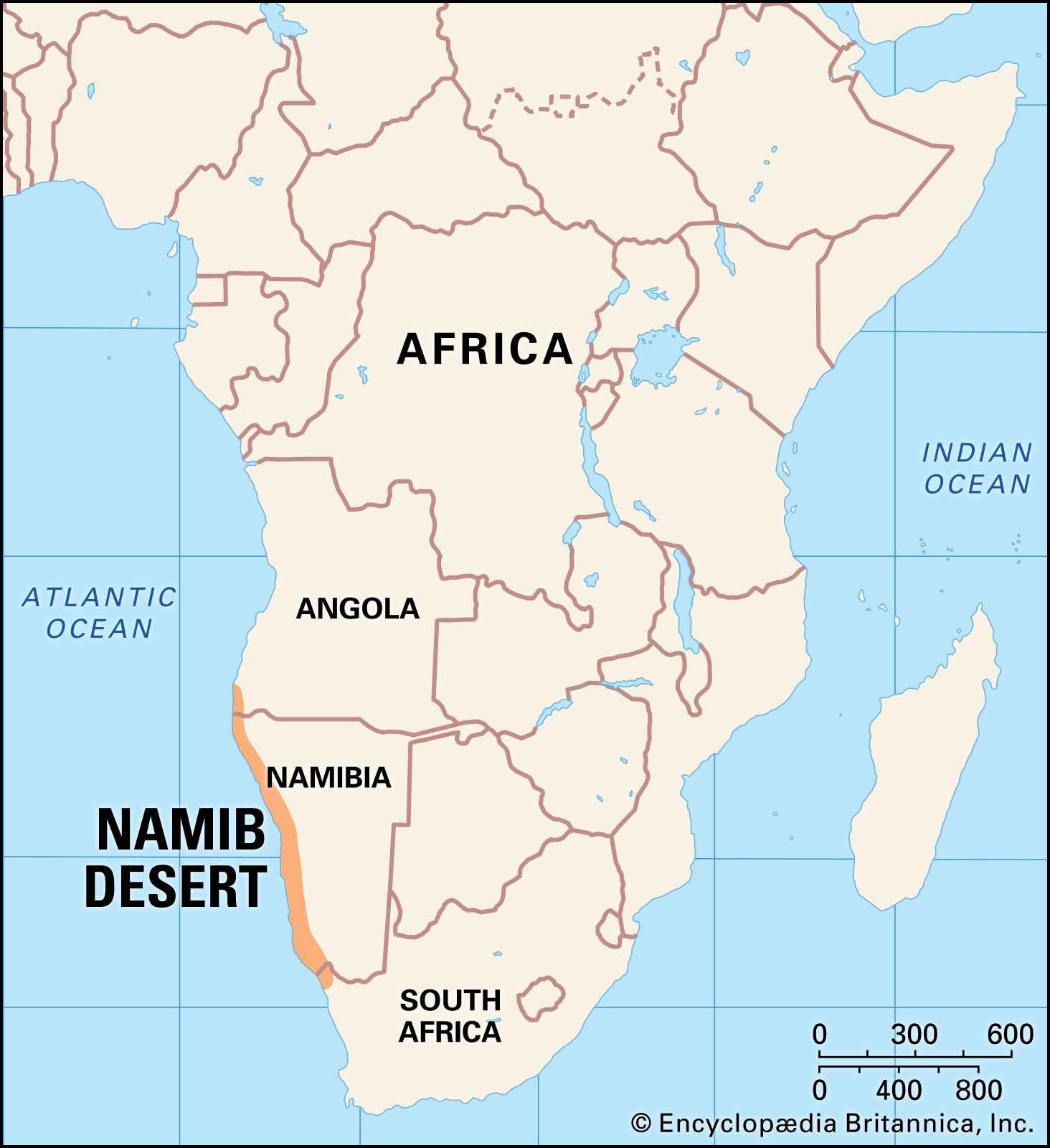 Somewhere near the midway point of that desert coastline, a long finger of sand wiggles out from the mainland and parallels the coast for about 10 miles. This barrier beach forms Walvis Bay. 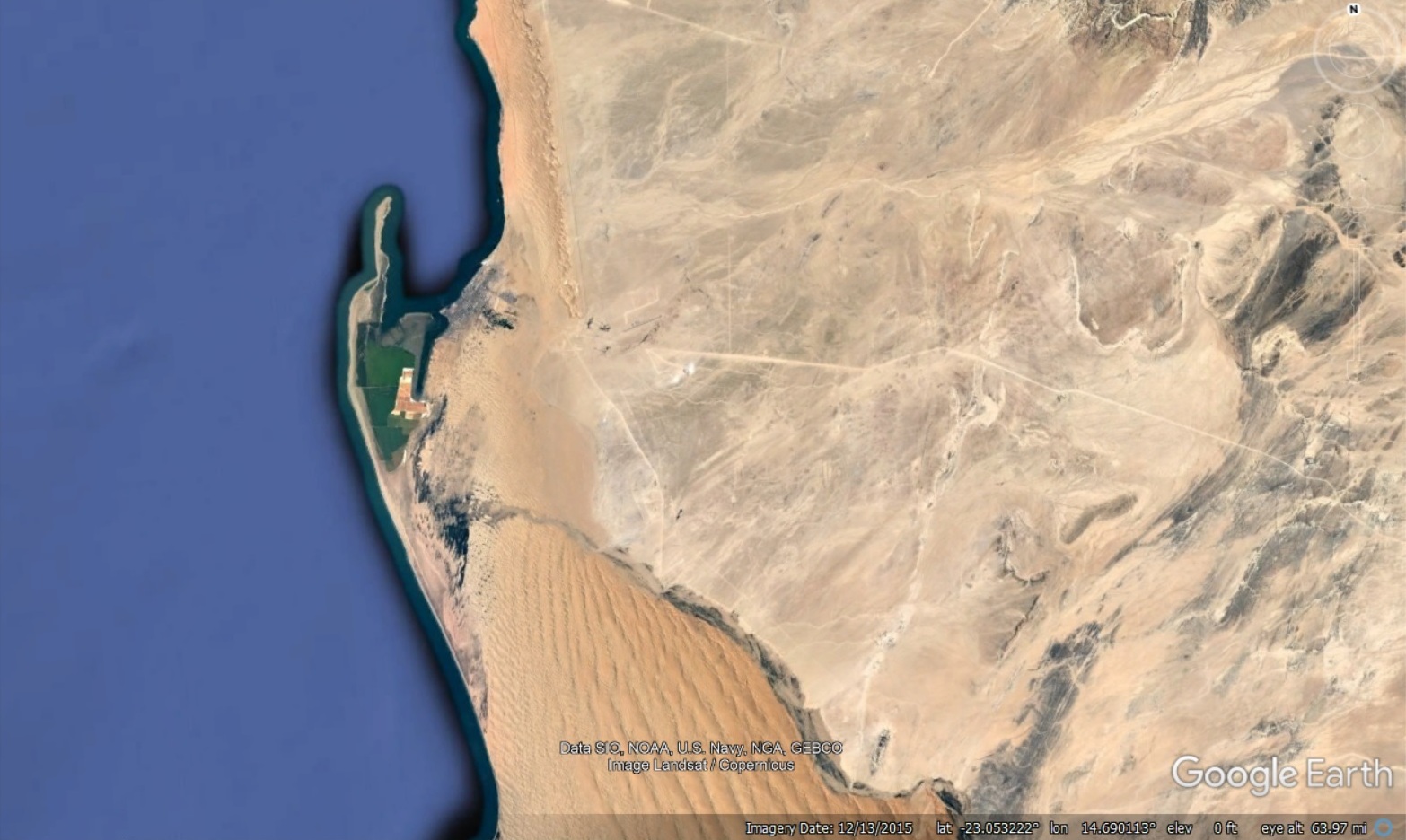 On the inside of that barrier beach, tidal sand and mud flats stretch for miles. At the south end of the bay lies a large area of salt works that produces more sea salt than anywhere else in sub-Saharan Africa. The natural bay combines with the man-made salt flats to provide a vast amount of foraging and breeding habitat for coastal birds. This oasis, positioned smack in the middle of a supremely harsh coastline, is stacked with literally tens of thousands of birds. This holds true particularly during the austral summer, when shorebird and tern numbers are significantly augmented by nonbreeding migrants from the Northern Hemisphere.

For those familiar with my home region of New England (USA), it most reminds me of the South Beach/Monomoy area of Cape Cod in terms of habitat, species composition, and sheer numbers...not to mention rarity potential. It seems that just about every shorebird or tern rare to southern Africa has turned up here. 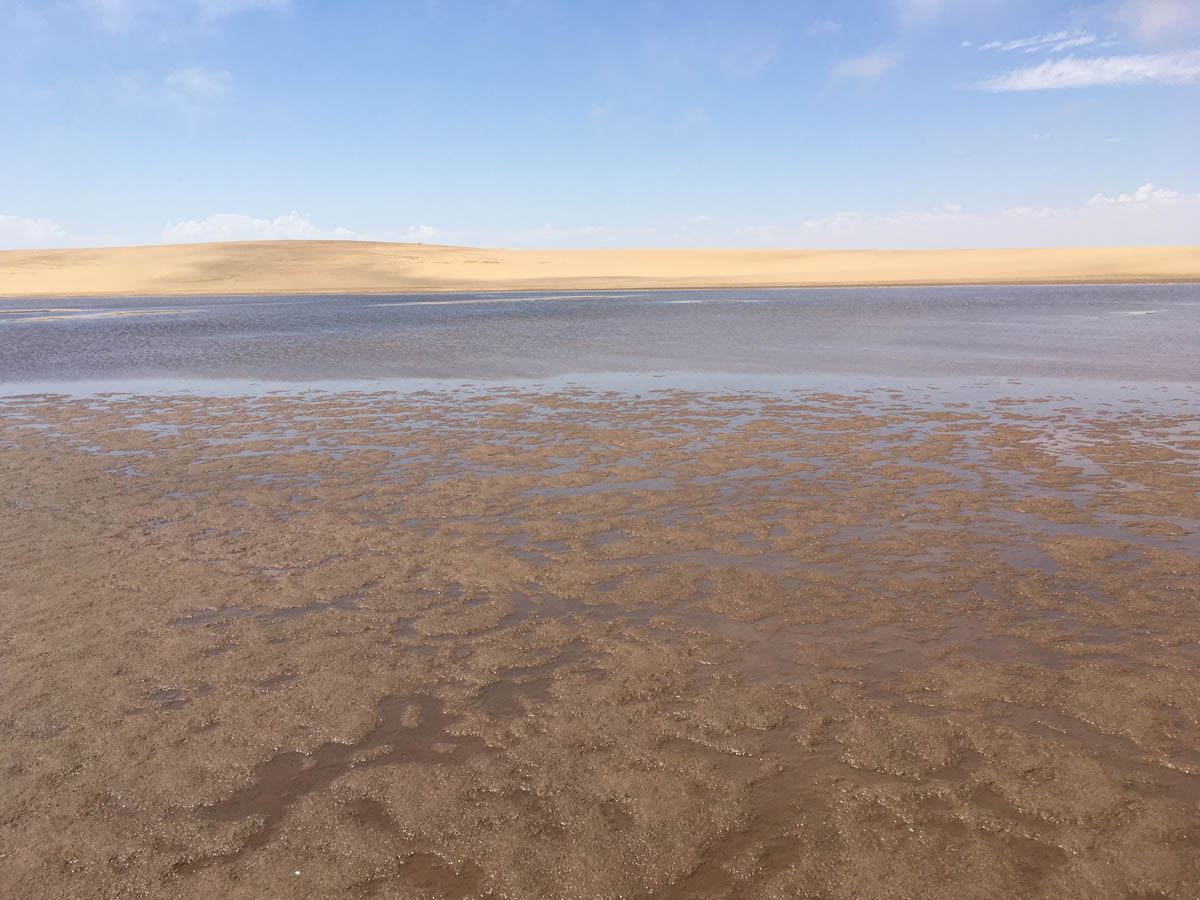 What surprised me most was the quality of the seawatching. Even with all those shorebirds around it was difficult to pull myself away from watching the ocean. JAEGERS were particularly common; I had multiples of all three species, though the hoped-for Brown Skua never did make an appearance. CAPE GANNETS were present in modest numbers. Tubenoses were represented by SOOTY and CORY'S SHEARWATERS. Terns were always present in good numbers, seven species in fact, including the range-restricted DAMARA TERN. On the morning of the 6th there was an impressive northward movement of BLACK TERNS; I tallied 283 individuals.

Adding to the seawatching fun were regular sightings of CAPE FUR SEALS and HEAVISIDE'S DOLPHINS!

While I stood facing the ocean, shorebirds were thick behind me. Diversity was nice, noting 18 species, many in large numbers. My favorites included CHESTNUT-BANDED and WHITE-FRONTED PLOVERS and AFRICAN BLACK OYSTERCATCHER. There were certainly more species to be found, had I more time to explore. GREATER and LESSER FLAMINGOES, one of the bay's top attractions, were always in sight by the hundreds. 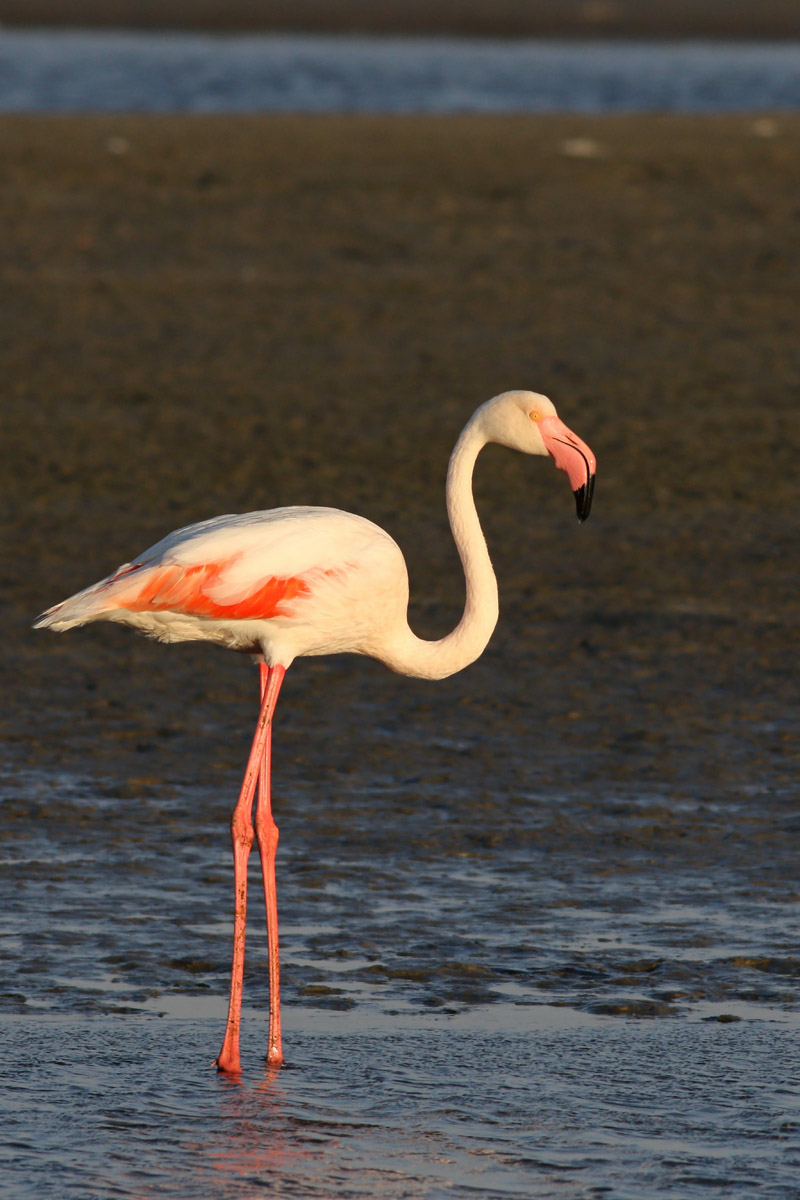 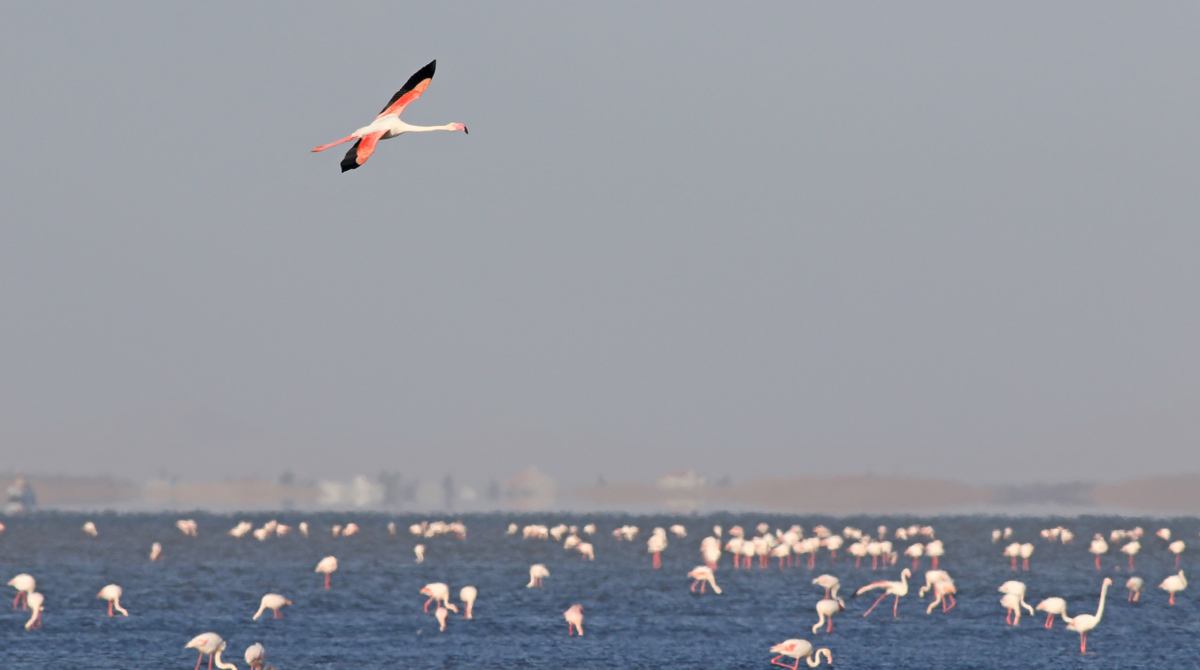 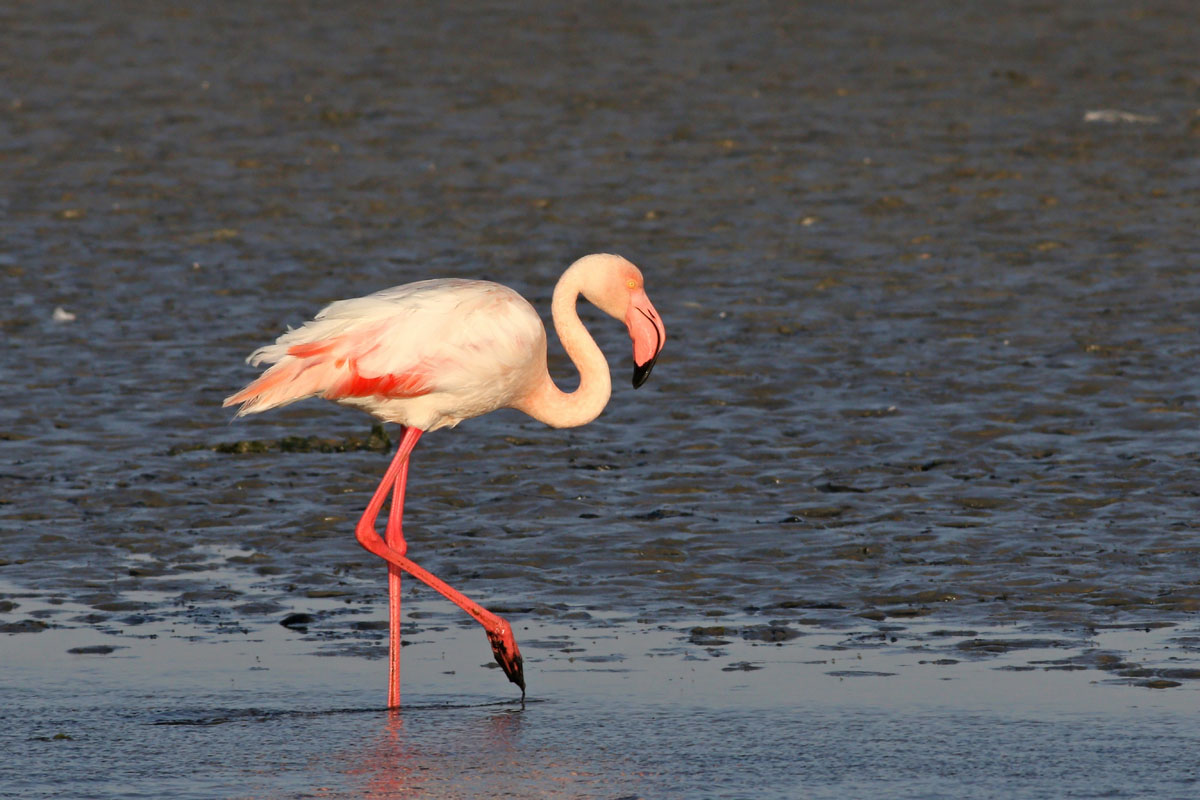 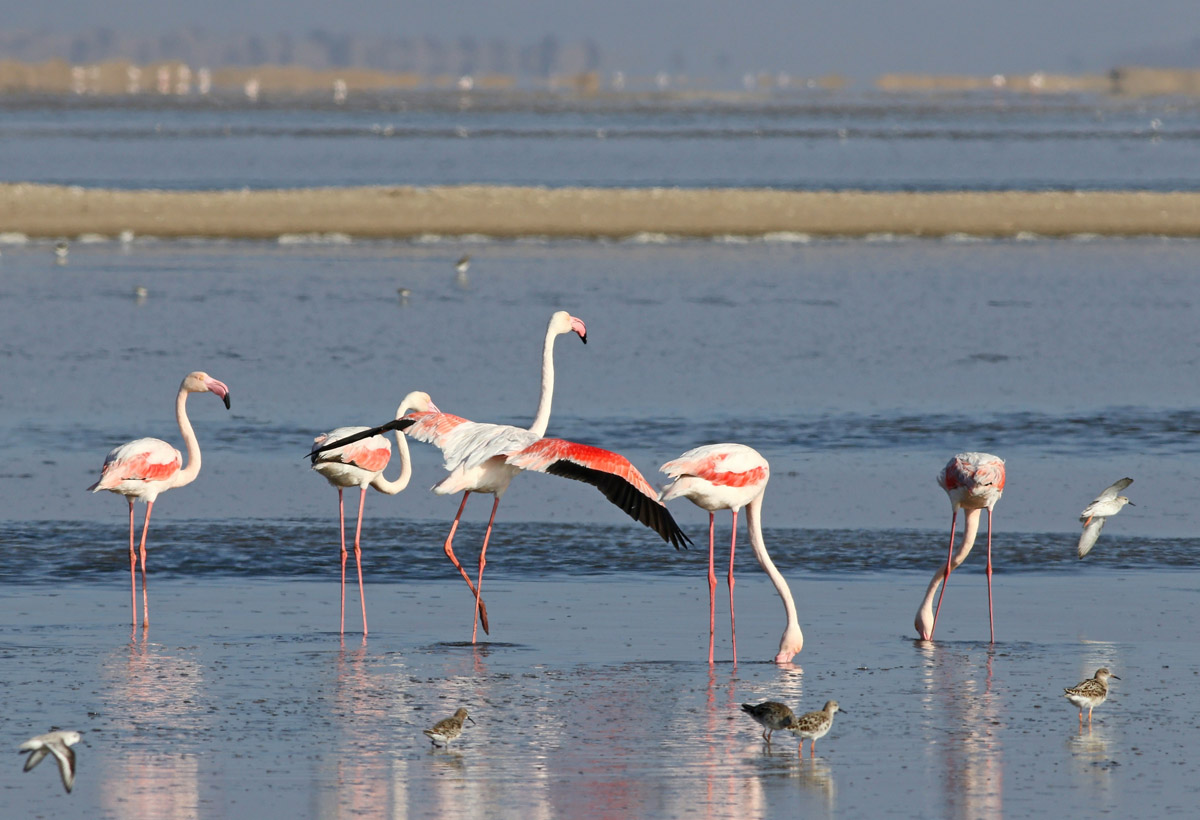 After nearly two days here I felt like I barely scratched the surface. I bet I probably scoured only 10-20% of the birds on the ground. The only areas on which I had time to focus were the esplanade (east) side of the lagoon, the road through the salt works, and the seawatch from Paaltjies. With more time, I would have loved to rent a kayak to reach the thousands of shorebirds I could see feeding on the west side of the lagoon, or bird the wetland formed by the wastewater outflow east of town, or take a touristy boat cruise around the bay for a different perspective, or rent a 4x4 to drive all the way out to the tip of Pelican Point, or try to gain access to the Oyster Farm (private), or hop on a pelagic trip (reportedly organized sometimes). Ideally, I'd have a full week.

Heck, driving down the beach some 50km to Sandwich Harbor for a couple days, where the dunes get dramatically large and a smaller barrier beach creates another tidal lagoon, must be worth a try.

That video was done by an outfit that runs day trips from Walvis Bay, but supposedly one can acquire a permit to drive your own rental vehicle all the way to Sandwich Harbor.

So many reasons to go back.

If there was one downside to birding here, it was that the birds seemed skittish. Whether feeding or roosting, I struggled to get close to the flocks, which is something I have not experienced quite to this degree. Was it the constant threat of the jackals that roam the desert? Or the presence of so many jaegers (one of which I did see cross over the beach towards the flats)? I don't believe that persecution from humans is a problem here, and there were no falcons in sight. Perhaps my sample size was too small and they aren't usually this spooky.

I get the feeling that most birding tours do exactly what our group did, which is give Walvis Bay no more than a day or so - just hit the esplanade and the salt works, perhaps with a look at the ocean, and make sure you see the endemic Dune Lark not far outside of town. And I get why. A traveler's time in southern Africa is often limited, and there is so much unique wildlife and scenery to soak in over a large distance. You've got hornbills and turacos and charismatic megafauna to see! Technically speaking, most of the birds at Walvis Bay can be seen elsewhere on the continent or in the world - Damara Tern and Dune Lark are the two biggest target birds for listers, and they can both be found within the same morning. But as you can see, there's so much more to it. If you're also enamored with coastal birding and have the time to spare, I recommend giving Walvis Bay an extended look.