[Disclosure: Princeton University Press provided a free review copy of Sasol]
For anyone about to make their first trip to Southern Africa, you will have your choice of field guides to the region. There are some that treat the entire area, and some specific to a single country. The region is defined as the area south of the Kunene (Cunene), Okavango (Kavango), and Zambezi Rivers. This includes the countries of Namibia, Botswana, Zimbabwe, Mozambique (only that part south of the Zambezi River, which excludes the northern half of the country), South Africa, Lesotho, and Swaziland.
I'm going to briefly compare the two most popular guides to the region:
[Sasol] Birds of Southern Africa (4th ed; 2011) by Sinclair, Hockey, Tarboton, and Ryan 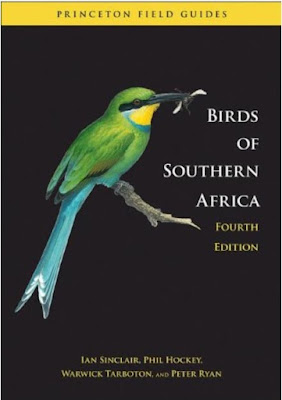 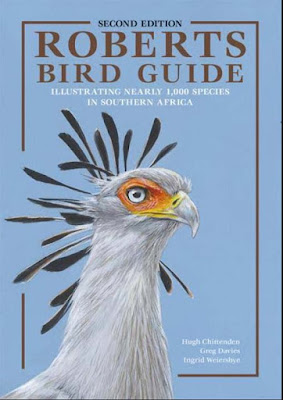 Sasol or Roberts? That's the debate you'll hear among birders in Southern Africa. With differing styles, strengths, and weaknesses between the two field guides, you'll probably end up gravitating to one over the other if given the chance to read both.
While both books share a similar basic layout (map and text on the left-hand page, illustrations on the right), the first time you thumb through them your eye will notice the differences in illustration style and plate layout.
The illustrations in Sasol are more consistently organized. Birds are in profile facing to your right against a white background, and each species is separated by a thin black line. The whole look is very orderly. (For a North American comparison, think of Sibley's consistent depiction from one species to the next. All similar species are in the same pose.)

The Roberts guide takes a different approach, with birds drawn facing every which way and without any lines of demarcation on the plates. There is also more habitat drawn into the background of the plates in this book. As such, the plates look busier. Not necessarily a bad thing; it's not so cluttered that you can't figure out which species is which. It's just not quite my style when I'm trying to learn new birds. (Here in NA, think Nat Geo's plate layout).

What about the quality of the illustrations? They are hit or miss in both books. I found Sasol more true to life in quality, though Roberts illustrates more age/sex/geographic variation. Some species appear bang-on to how they appear in real life, while others are seriously in need of a remake. For example, I prefer the waterfowl, cuckoos, and swallows in Sasol, and the raptors, starlings, and bee-eaters of Roberts. The terns are pretty dreadful in both...
Roberts is the clear winner in the Range Map category and is worth owning just for that. Using data from the second Southern African Bird Atlas Project, "heat maps" are drawn to reflect abundance as well as range, a level of detail that is not generally found in field guides quite yet. Sasol's maps attempt to do the same thing but not in nearly as much detail.


As far as text goes, I found it equally informative in both guides. I'd rate it above average for both publications.
The quality of the introduction is not usually something that influences my judgement of a field guide, but I will address it anyway because there is a clear winner here - the Roberts guide has plenty of "extras" before and after the species accounts including detailed information on habitat, conservation, recent additions to the region's avifauna, and even a list of potential future vagrants.
The addition of all that extra info to the Roberts guide contributes to its size, which makes it less mobile than Sasol for field birding. Sasol, having 464 pages, is significantly lighter in the hand than the 569-page Roberts guide. Using my scale at home, Sasol weighs in at 1.87 lbs compared to Roberts' 2.47 lbs. 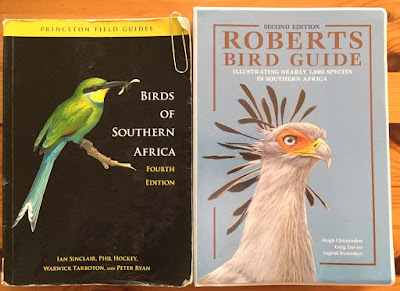 If you're wondering, yes, both guides do offer electronic versions that include vocalizations. I did not go that route so cannot comment on the Apps. I'm still pretty old school when it comes to books!
In the end, I found myself going first to the Sasol guide in the field, using that a solid 80-90% of the time (hence all that wear and tear). However the Roberts guide did save my butt with a handful of IDs and confirmed many others. And of course having those Roberts range maps available was really nice. If I had to do it again, I would have taken the paper version of Sasol and ordered the Roberts App as a supplement - that way I would have saved some luggage weight and had a different set of recordings to use as well.
Your preference will likely come down to whichever illustration style you prefer, because let's face it, that's what matters most in a bird field guide. I highly recommend owning both, because they do complement each other nicely.