The remnants of Hurricane Ida wreaked havoc even in her weakened form here in the northeast USA as she dumped 4-8 inches of rain throughout Connecticut on September 1st. As the low pressure slowly pulled away on the 2nd, skies finally brightened late morning. Temperatures had fallen, humidity had dropped, and there was a solid wind from the north. Off from work for a few days, I figured I would head to Lighthouse Point in New Haven to see if anything was flying. Abby Sesselberg and Paul Cashman were already on watch but had not noted anything moving yet. Not long after my arrival the first migrant raptor of the day ripped through in the form of a MERLIN, soon joined by OSPREY, BALD EAGLE, and NORTHERN HARRIER. A small afternoon flight had developed. Swallows (five species) and swifts were also on the move in numbers. We heard a ROYAL TERN calling from the harbor and soon spotted it from the hawk watch.

Before heading out, I drove down to the beach to scan the water and found several flocks of terns and gulls feeding offshore. Among the COMMON TERNS were a handful of FORSTER'S, a ROSEATE, and two CASPIAN TERNS flew overhead while calling.

Conditions overnight, clear skies with a cool north wind, were excellent for nocturnal migration. I headed to Willard's Island (Hammonasset Beach SP) with Severin Uebbing and Cody Limber for morning flight, which was decent but not great. The count was 178 warblers of 11 species.

After dropping off Severin and Cody post-Hammo, the afternoon was looking beautifully sunny with a light wind. Why not spend the rest of the day on the water? I had been looking for calm conditions during the late August-early September window to explore Long Island Sound via boat. On paper, this should be one of the best times of year for rarities in the Sound. Long-tailed Jaeger, Sabine's Gull, and Red-necked Phalarope are all migrating right now, and those pelagic populations will take a partially over-land route from their breeding grounds to the Atlantic Ocean, which means that some likely fly over CT each autumn without being seen. Adding to the list of potential rarities, Brown Boobies have made a minor push into the area in recent weeks. From that list, only Red-necked Phalarope is not an absolute mega in Connecticut, and even the phalarope is rare. None of those species can be expected by any means, but the odds of running into something unusual increase from "yeah, right" to "puncher's chance" at this time of year. At the very least, Common Tern and Laughing Gull numbers tend to peak in that window, which means that you're very likely to have birds to look through, rarity or not.

I headed east out of New Haven Harbor and quickly saw the same feeding frenzies that I had scoped from Lighthouse Point the prior afternoon. Armed with fishing gear, I quickly caught two bluefish for the table and put them on ice. The goal was to focus on birds, though, so after going through these flocks I continued eastward. I got as far as Old Saybrook when the sea conditions quickly turned. The wind increased sharply and was now coming out of the west, creating a "wind against tide" scenario that caused a classic Long Island Sound chop to develop. There was no reason to go any further, so I headed back towards home. The birding was OK, though not as many terns and gulls were present as anticipated. In fact, the New Haven area held the most activity by a wide margin. Most notable to me was the presence of five GREAT CORMORANTS, three adults and two juveniles, all clearly recently arrived from the north. Conventional wisdom says it is early for this species' arrival in Long Island Sound, and they are flagged by eBird as such, but recent September boat trips to outer islands and breakwaters have revealed that they arrive earlier and in greater numbers than we can appreciate from shore. 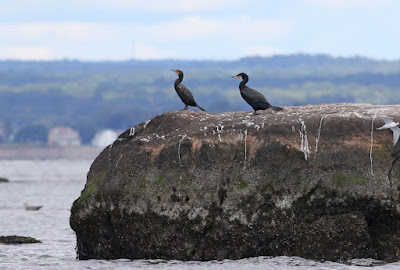 Terns were represented by the four most expected species for the date: COMMON, FORSTER'S, ROSEATE, and BLACK.

Upon my arrival back to New Haven, the fish and birds were still going strong. This time there were birds further offshore, which I thought held better promise for a jaeger. I also wanted to make sure that they were indeed feeding over bluefish (they were) and not over my first false albacore of the year. Caught and released a few more blues, which always put up a good fight. One particularly impressive school of blitzing blues popped up next to the boat, but while videoing the action I nearly dropped the phone when I noticed that a SABINE'S GULL was feeding just off the stern of the boat! Somehow I managed to stop the video before the expletives started flying. I ran for the stowed camera.

There it was - a fresh juvenile Sabine's foraging over the feeding fish with a smattering of Laughing Gulls. This is only the third state record of this species, the prior two occurring on the dates of September 3rd and 5th. I'd call that a pattern.

I fully expected this to be a short-lived sighting, as many pelagic birds leave the Sound as soon as they can, but to my surprise the bird was casually working the area for food. I was on it for about 20 minutes before the feeding stopped and the birds scattered on the water. I never saw it leave, so I assume it dropped to the water and was lost in the increasingly steep chop. 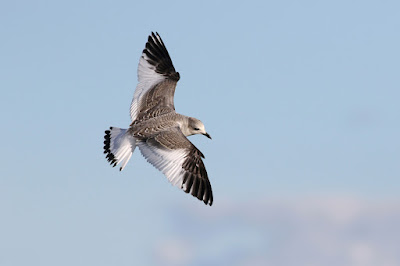 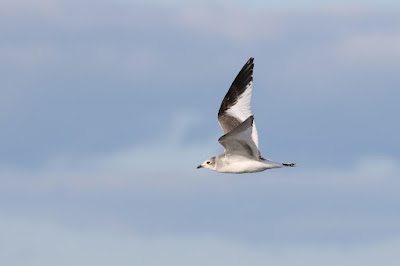 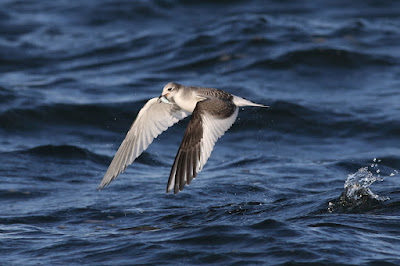 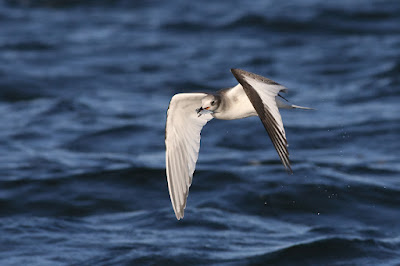 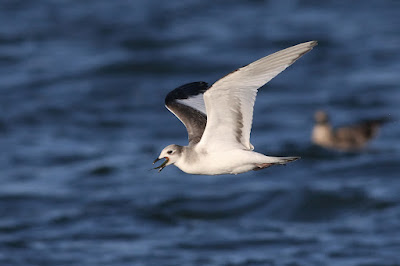 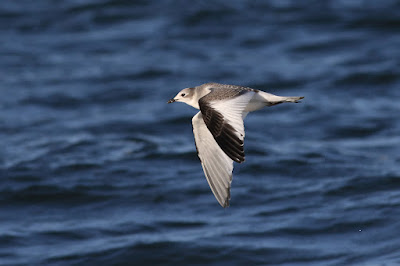 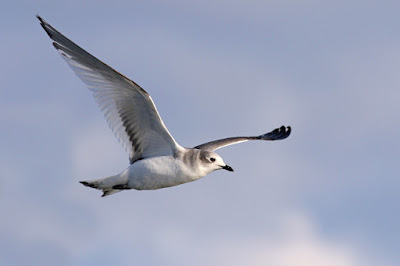 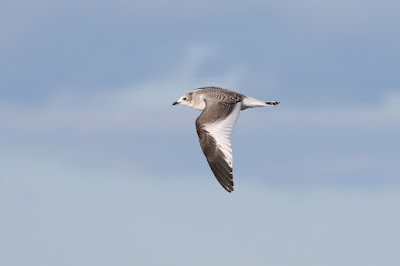 It was back to Willard's this morning, with Julian Hough, for migration, which turned out to be quite slow. 81 warblers of ten species flew out in an hour and a half. The west end puddles, in fine condition after all that rain, continued to hold shorebirds including STILT and BAIRD'S SANDPIPERS.

Later in the afternoon I reconvened with Julian and his son Alex for a boat ride off New Haven in hopes of a repeat Sabine's performance. Unfortunately most of the gulls and terns from the previous two days had vanished. Our hopes for something unusual had been dashed. Out of absolute nowhere a small gull flew across the bow of the boat that turned out to be a juvenile BLACK-LEGGED KITTIWAKE. This species is rare in CT and is on the Review List, though it is not in the same realm as the Sabine's. I believe this is my fourth self-found kittiwake in the state. It quickly disappeared to the southeast, more in line with typical LIS pelagic behavior than yesterday's Sabine's encounter.

There was definitely something going on with juvenile kittiwakes over the weekend. On the same day as the sighting above there were two land-based sightings from the NYC/LI region and another inshore MA, plus an inland PA record a day or two later.

That's a few days of quality local birding for sure. It felt good to get back into the swing of things, as autumn migration seems to have woken me out of my non-birding slumber. Monitoring the Willard's morning flight has been a blast, and being able to turn up some rarities via boat is always a sweet surprise.