Birders are, by nature, collectors. When we observe a species new to us, we add it to our collection AKA list. Some birders are obsessive listers and need to know how many species they have seen on cloudy Tuesdays during October while the moon is in waxing gibbous. Others may not keep an official list at all, only mentally recalling if a particular species is new or not. Most of us lie somewhere in between.

In this part of the world, one of the most commonly kept lists is the state/provincial list. This is especially true for a small state like Connecticut in which one can chase pretty much any rare bird in a half day or less, no matter which corner of the state you inhabit.

When I began birding some 25 years ago, I was mentored by several birders who were very serious about their Connecticut state lists, so I picked up the habit straight away.

The first to "400 before 40," I am the youngest to 400 species in the state by a reasonably wide margin thanks to the era in which I have grown up. Information now travels faster than it ever has. Gone are the days of coming home to an answering machine full of messages about a rarity that had spent all day just a few miles from where you had just been birding! Now birders expect to hear about a rarity the minute it is found (an unreasonable expectation, but true). Certainly, the current crop of younger CT birders will hit milestones like 350, 375 and 400 at an even faster rate.

In recent years this traditional state list has become less and less important to me. While there is quite a bit of hard work buried in those 400 species, it generally lies with the birds I have found myself or with friends. In other words, not the ones found by others that I have shamelessly chased. For every self-found rare gull is a twitched Black-bellied Whistling-Duck standing in a puddle beside the road.

Part of me is still proud of this milestone, but most of me realizes that, really, it is nothing special. Just about anyone can do this. As long as you are willing to commit the time and energy, most people are physically capable of receiving a text message, driving to the correct location, and looking at a bird that a dozen people are already staring at. These days, that is how it often happens.

So while I am very pleased to have reached 400 species in Connecticut in the traditional sense, I feel that a shift towards "Self-Found" lists is the future of bird listing for those who take great pride in their craft.

That being said, my twitching days are not over, and I might just see you at Connecticut's next Ivory Gull!

I was obviously just fine with walking out to the tip of Sandy Point in West Haven on October 18th, where Bill Rankin's superb find, a SMITH'S LONGSPUR, had been hunkered in the grasses all day. This species had been seen in CT a few times before, though never long-staying. To nobody's surprise, the bird was not refound the following day. The only other one I had seen was an individual in similar plumage at Jones Beach, NY in February 2007. This evening's views were much closer and more prolonged than my life bird, thus well worth the effort. Very well done, Bill. Congrats on the wonderful find. 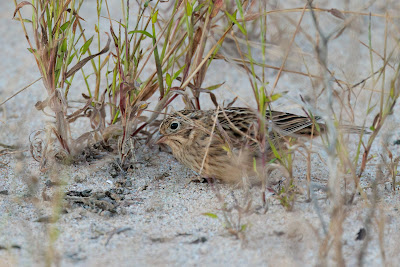 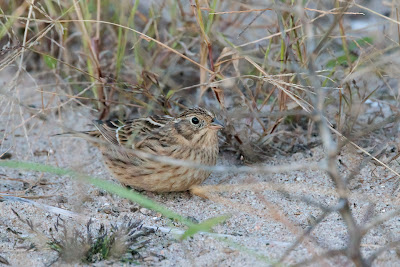