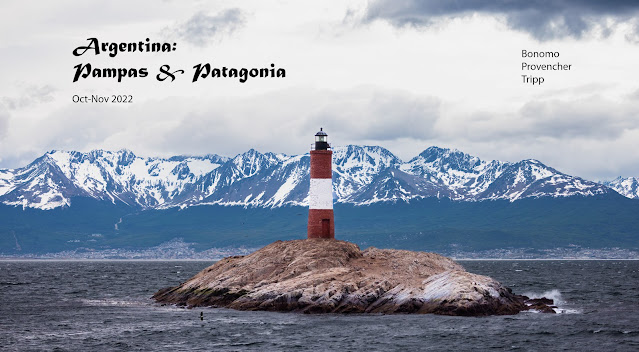 Over the years I have made it no secret that my favorite natural habitats are wide open spaces. We're talking grasslands, tundra, fields, coastlines and oceans, etc. The farther I can see, the better. No knock on the woods, but I'll take a teeming mudflat over a crawling rainforest most days. A few of my favorite trips of all time have been to such open places as Alaska, Namibia, Japan, and Arctic Norway. So when I was toying around with the idea of a birding trip to South America, Patagonia immediately jumped to mind. Not knowing a ton about the region, I soon learned that the part of the world called Patagonia is a massive part of southern South America, occupying some 400,000 square miles.

Obviously with a two-week window, there would be decisions to make. First, Chile or Argentina? Either would have been fantastic, but Argentina seemed a fine choice because 1) the infrastructure is known to be superb, and 2) Argentina is currently the cheaper country to visit thanks in large part to runaway inflation happening there. With the value of the Argentine peso declining, the US Dollar currently receives a very favorable exchange rate. These are tough economic times for the country, and hopefully the government can get their act together and reverse the trend ASAP. In the meantime, it made sense for us to capitalize on a cheap vacation and contribute our little bit to their tourism industry at the same time.

Narrowing the region down to Argentine Patagonia still kept quite a bit on the table. We could have done a full "highlights" tour exclusively in Patagonia, but since all flight itineraries seemed to route through Buenos Aires to the north, this opened up another expansive habitat to consider: the Pampas. Further logistical research indicated that we could do a few days in the Pampas, a few days in Northern Patagonia, and a few days in Southern Patagonia (Tierra del Fuego). This itinerary would include internal flights between these three regions.

But after thumbing through the field guide and its range maps, it became clear that driving that first leg of the trip would put into play new habitats and birds along the way, including a few such highly sought-after species as Pampas Meadowlark and Yellow Cardinal. This would mean an ambitious breakneck road trip of about 1,000 miles by car in less than a week. After some discussion with compatriots Dave Tripp and Dave Provencher, we decided to go for it.

So we would fly into Buenos Aires, rent a sedan (gulp!) and set off on our journey, first eastward and then southwest, returning the vehicle at Trelew a week later. From Trelew we would fly to Ushuaia where we'd rent a small SUV and spend a handful of days birding the southern tip of the continent. Then on our way back home we would have a 24-hour layover in Buenos Aires, allowing one morning to bird Ceibas, which would give us a taste of warmer weather and a suite of new birds.

It was a total whirlwind and probably the fastest-paced birding trip I have ever been on. Thanks to a lack of major unforeseen obstacles, we hit all the targeted sites and successfully tracked down most of our desired species. While I think we all would have preferred to have a few extra days to perhaps sleep more and drive less, the trip was a massive success, and we thoroughly enjoyed our first visit to this must-see country.