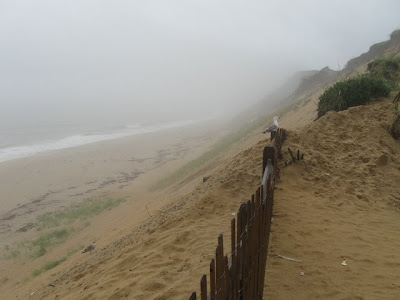 Well, after some deliberation I decided to head out to the Cape for the storm this weekend, hoping that either the storm would crank up, or it would fizzle out so much that I could sneak in some beach time on Sunday. Neither happened.

What we got were rather minimal winds; the only impressive part of the storm was the amount of rain that fell on Saturday.

But it was the right decision to go. Had a great time with some great folks and even saw some birds along the way.

Saturday -
I arrived pre-dawn to meet Jeremiah T. and Marshall I. for a day of storm watching. We bopped around the outer Cape, hitting spots along the ocean and bay. We had the most action at Head of the Meadow (ocean), Race Pt (ocean), and along Rte 6A in Truro/P'town (bay). We were joined midday by Jeremiah's father Peter and Matt "doghouse" G. Our highlights included 2 Long-tailed Jaegers (had all 3 jaeger species) and several Leach's SP. 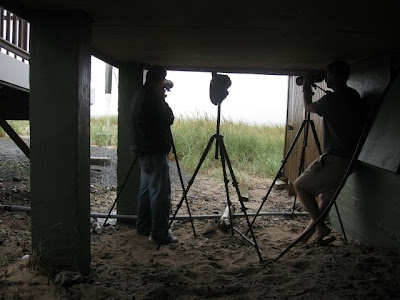 hiding underneath the ranger's station at Race Pt 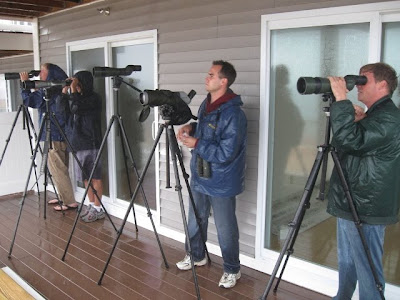 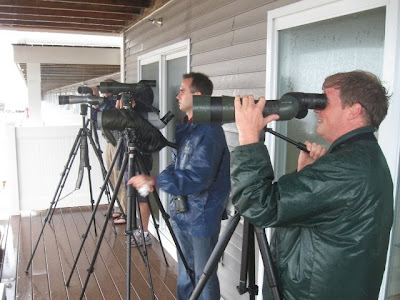 hiding behind an inn as we watch the bay 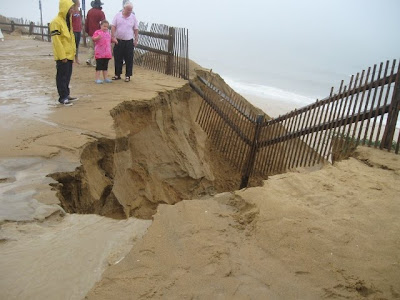 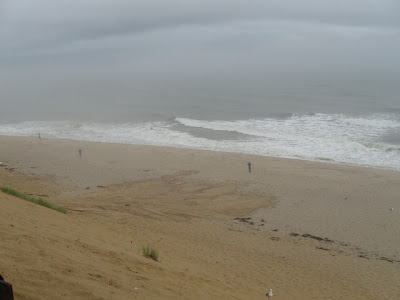 Major washout from the elevated parking area at this beach. The parking area was very elevated (good place for a seawatch), and the washout spilled all the way down the bluff onto the beach below.
Blair Nikula had a Sabine's Gull in P'town in the morning, but we were not so lucky.

Ended the day with the best part of the weekend: grilled fresh yellowfin tuna steaks at the Trimble residence caught the day before by Peter, plus a few beers and a few laughs. Great stuff.

Sunday -
Began with a rather uneventful watch from First Encounter Beach in Eastham (bay). As the drizzle moved in I decided to head home mid-morning.