Feb 18 - After pulling out the books and figuring out the weather forecast, I found myself immediately east of Borrego Springs at dawn. [There will be a separate upcoming post on how my iPhone was instrumental in planning my final 3 days of birding in CA, and seeing more birds because of it.] 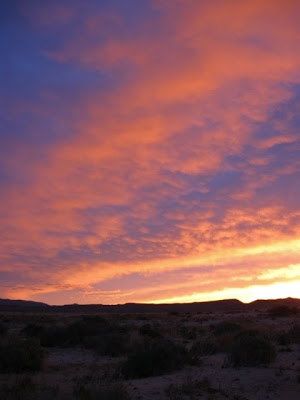 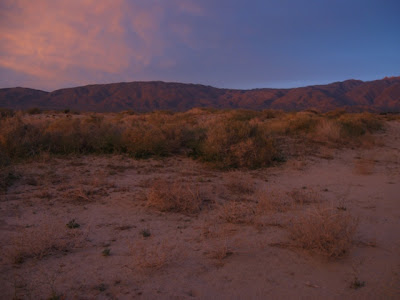 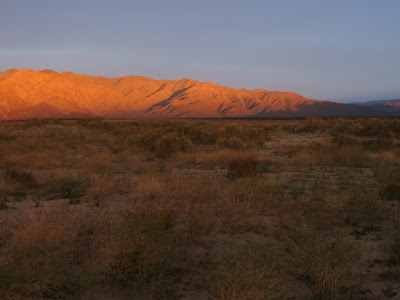 sunrise in the Anza-Borrego Desert
The target bird here was Le Conte's Thrasher, my most highly sought-after bird of the trip. The thrashers have already begun their breeding cycle by mid-February, so the likelihood of a male singing or birds nest-building is high and increases one's chance of a sighting.

Immediately apparent were several SAGE THRASHERS and "Interior" SAGE SPARROWS. Sometime around sunrise I heard a couple short runs of thrasher song to the north of my car. 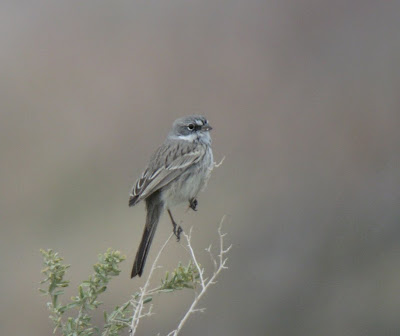 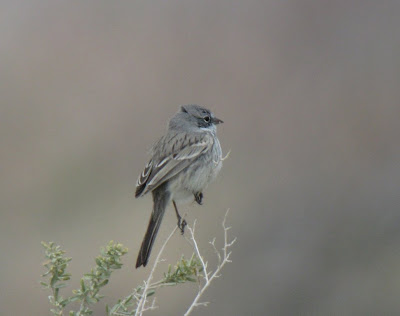 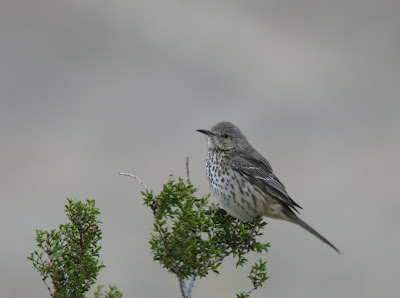 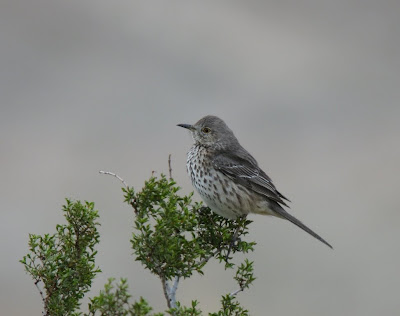 Sage Thrasher
After a few moments a distant LE CONTE'S THRASHER appeared at the top of a shrub before diving back down out of sight. 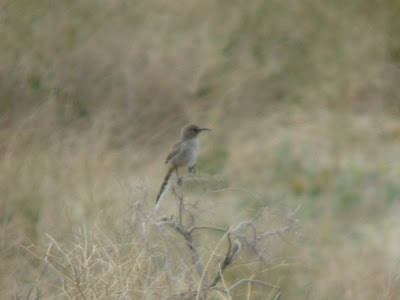 first glimpse at Le Conte's Thrasher
I slowly approached the bird's location with scope in hand and was able to get some great looks when the bird popped up again. I grabbed a few partly-obscured digiscoped shots of this sand-colored desert scarcity, which came out OK considering the lack of sun (thank you Kowa scope and your 88mm objective lens). 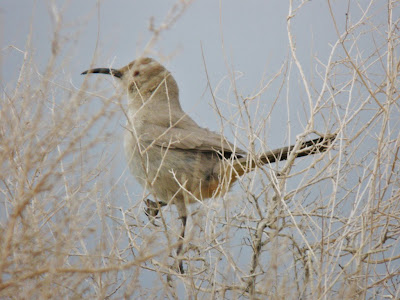 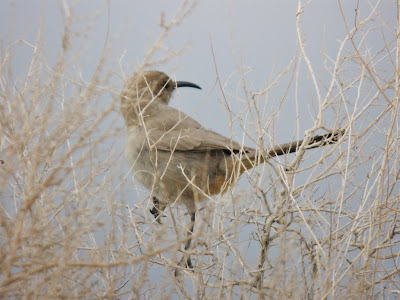 Le Conte's Thrasher
I observed the thrasher for a while more from this spot, watching it run from bush to bush until finally out of sight.

From here I departed the Anza-Borrego Desert for the mountain town of Idyllwild, nestled in the San Jacinto Mountains at more than 5,000 feet in elevation, in search of White-headed Woodpecker. 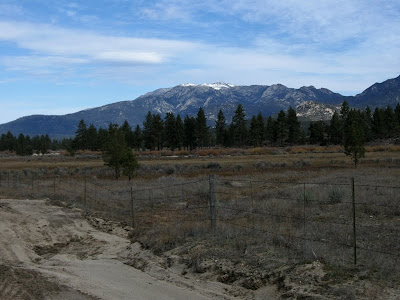 the approach to the San Jacintos
I started at the Idyllwild Nature Center, which has a network of trails through pine and oak woodland with a reputation for holding White-headed WP. Before trying the trails I gave the parking lot vicinity a good search but came up empty. I started the long Perimeter loop trail that climbed in elevation before dropping down to an adjacent campground. Along the way I ran into some nice mountain birds such as Band-tailed Pigeons, Mountain Chickadees, Oak Titmice, Townsend's Solitaire, and Pine Siskins. 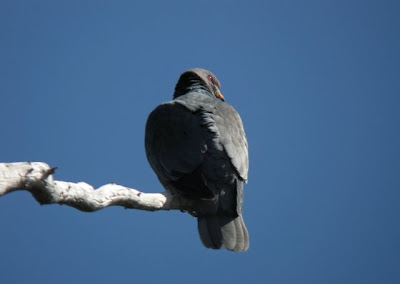 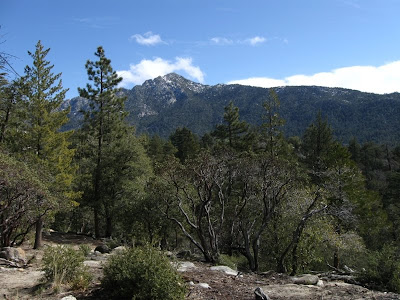 After a couple hours of hiking there was still no sign of any WHWO until I reached the campground. I decided to temporarily leave the trail to walk the campground's paved road for a little while. Right along the road a female WHITE-HEADED WOODPECKER appeared, soon joined by a calling male. 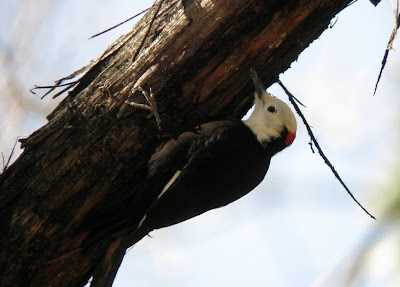 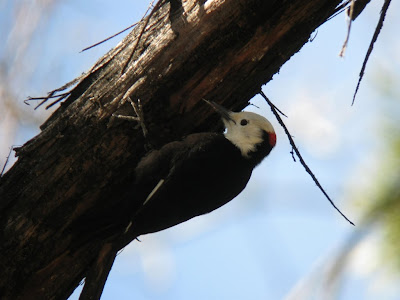 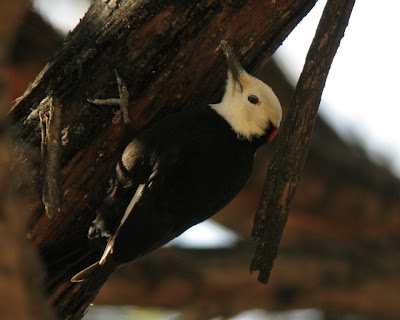 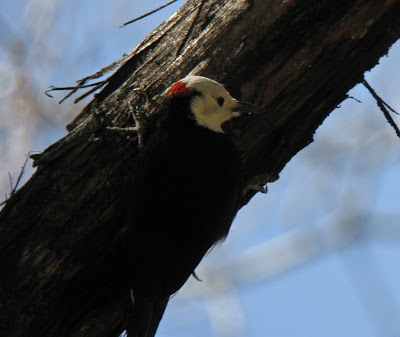 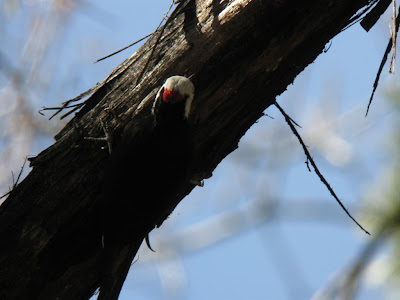 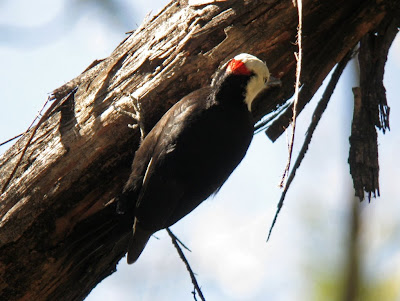 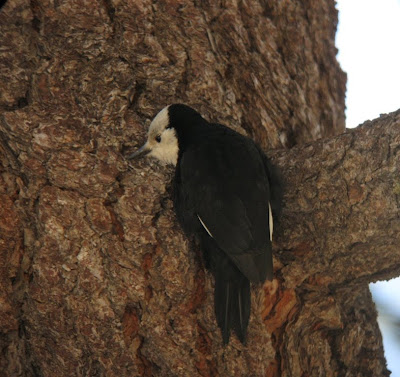 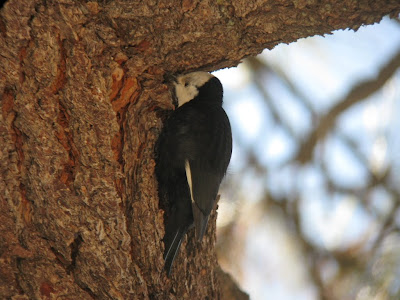 female White-headed Woodpecker
I found it a bit funny that I had just spent a bunch of time and effort working up a sweat on a steep trail only to find the birds at a spot I could have driven to! For anyone who is interested, find your way to the Idyllwild County Park Campground entrance and drive on the main paved road. You will come to a check-in station in the road that has an American flag waving over it. Immediately past this station you'll see a parking lot on your left. The woodpeckers were in the tall pines across the road from the parking lot.

On the trail back up to the Nature Center I flushed a MOUNTAIN QUAIL which triggered a nearby male to give a few loud crows.

At this point around 3pm I had seen all my targets for the day and had to decide whether I should continue to LA as planned or run back to San Diego for an evening try at the Pacific Golden-Plover there. I decided on the latter and headed back southwest. I arrived back at Tijuana Slough with about 45 minutes of light left. Fortunately, the rain that had begun there earlier in the afternoon had stopped just as I arrived. Unfortunately, the plover was again elusive. A singing "Belding's" Savannah Sparrow and a few calling "Light-footed" Clapper Rails were the only highlights.