April 03, 2012
On this past Sunday Jake Musser and I hit the coast mainly in search of gulls, particularly Bonaparte's Gulls. This year's barnacle larvae phenomenon has resulted in some impressive gull numbers, with Ring-billed and Herring Gulls dominating up to this point. But over the past week Bonaparte's Gulls have arrived in very good numbers - flocks that used to be typical of March-April in past decades. In recent years, the numbers of spring migrant Bonaparte's Gulls in CT have significantly waned, and so have the frequency of Little and Black-headed Gull sightings.

Jake and I arrived mid-morning at Southport Beach in Fairfield, CT, where a flock of 3000+ BOGU and one Black-headed Gull had been seen earlier in the week. We joined Mark Szantyr and Hayden Hall who were busy photographing the gulls. The BOGU numbers were climbing towards 1,000 as more and more flew in from Long Island Sound to bathe, preen, and roost. After a bit of searching an adult LITTLE GULL flew into the fray, picked out in flight by its strikingly dark gray underwings. The bird dropped into the flock before being flushed and not seen again despite intense searching. It was a brief stay but we enjoyed the views we had of this stunner. 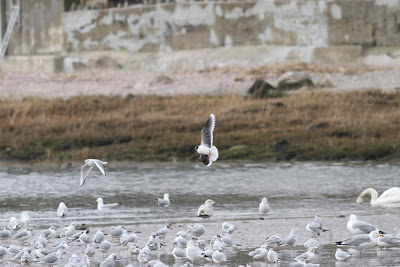 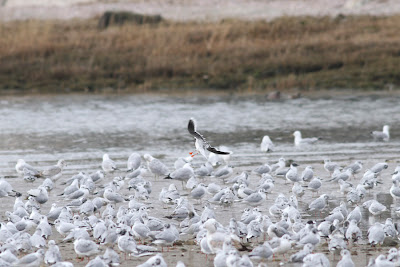 adult Little Gull, in prealternate molt, as it drops into the BOGU flock
Also at this location was a third cycle LESSER BLACK-BACKED GULL and a continuing drake EURASIAN WIGEON.

We headed west from there and encountered another impressive gull flock in Stratford, this one larger and containing many more medium-large gulls in addition to 1500+ Bonaparte's. We couldn't turn up any rare small gulls, but we did add two ICELAND GULLS and another LESSER BLACK-BACKED GULL to the list, giving us 7 gull species on the day.

There's no telling how much longer this barnacle phenomenon will continue, but we should be well past the peak at this point. Gull numbers and diversity should dwindle through the month, but there appears to still be time to enjoy the show and perhaps find some rarities hidden among the flocks. Little Gull, in particular, is still very possible over the next two weeks if history is any indication.