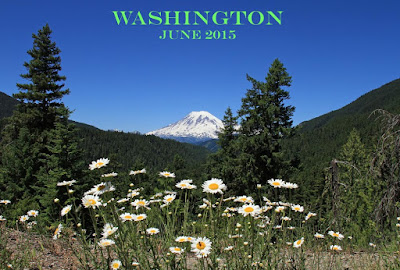 I'm just back from a fantastic week in Washington. While the purpose of the trip was to attend friend Ryan Merrill's wedding, I spent much of the week traveling through the western and central parts of the state, birding and enjoying everything else the region has to offer along the way (nature, baseball, wine, fresh local foods, etc). IMO, Washington might be the most underrated birding state in the country. This was my third trip to WA (the others were in spring and winter), and I think I've enjoyed it more and more each time. The habitats in the western half of the state are impressively varied and include the Pacific coast, the Strait of Juan de Fuca & Puget Sound, the moist Olympic Peninsula, the Cascades and their own habitat diversity based on rain and elevation, the shrub-steppe, and even prairie potholes. All of that packed into an area small enough to see in a single week-long visit...though I promise you'll just be scratching the surface and will leave wanting more. Whether you enjoy being on the water, in the mountains, or in dry desert-like environments, Washington has something to offer for you. I should work for their tourism department, no?

The oft-lamented western Washington weather was actually quite beautiful this week. I only encountered a couple brief showers and very little cloud cover. The sun was bright and warm on most days! The locals were remarking about the unusually small snowpack and bright weather for June. I'm told it usually doesn't get really nice until after the 4th of July, when their summer really begins and persists into October. Apparently it was a dry winter even. This has resulted in the high elevations clearing out from snow earlier than usual, so I had access to every road and trail I had planned on visiting.

I ended up with 183 species for the week (about five days of birding), including some nice quality in there. Highlights included "Franklin's" Spruce Grouse, Snowy Plover, Ancient Murrelet, Flammulated Owl, Black Swift, Williamson's Sapsucker, and hybrid Townsend'sxHermit Warblers.

Even taking the birds away, these places are well worth a visit. I've always thought that Colorado would be the perfect state if only it had a coastline. Well, Washington comes pretty close to that concept. No, the Cascades are probably not quite as majestic as the Rockies, but they're still pretty spectacular.

Another fun aspect of birding western Washington is the rarity potential. There is an abundance of habitat and relative lack of coverage by birders. Despite the thick population density, most people are clustered around Seattle, all while the Olympic Peninsula and outer coast, among other places, do not get nearly as much birder coverage as they deserve. Washington's geographic location plus habitat makes it a prime state for finding rare birds. The true potential of some of these locations, such as the amazing Neah Bay, are just starting to be realized. While birding the outer coast and peninsula you often have the feeling that you could find something really unusual at any moment.

I'm going to split the trip summary into a few separate posts, with photos, in the coming days.

Of note, I will be back in western Washington with Connecticut Audubon Society in September, focusing on birds and marine life of the Olympic Peninsula and San Juan Islands. If interested in joining us, click HERE!