June 06, 2017
Over the past couple years my brother and his best friend Rob have aggressively pursued offshore fishing. Western Long Island Sound has them feeling a bit claustrophobic, and who could blame them! Rob's family's new boat has allowed them to get offshore much more often. With the way the weather has been so unsettled this spring, I was surprised to hear that they were planning on a run offshore on Sunday. A day's break in the weather resulted in a forecast for calm seas, and I was pumped to join them for a quick trip during that window. We left the dock in Milford, CT before first light. The run to Montauk and around the corner to the south was wonderfully smooth as predicted. We ended up about 20 miles south of the point at a well-known area called Butterfish Hole.

We encountered very little life until we hit the hole itself; the grounds to the north seemed dead. Once we saw our first few shearwaters, however, it was game-on and we seemingly had life around us at all times for the rest of the trip. Tubenose diversity was a bit better than I expected. The four regular shearwaters were represented, a couple times all four side-by-side. SOOTY, GREAT, CORY'S and MANX in order of decreasing abundance.

Only a few WILSON'S STORM-PETRELS were seen, likely just arriving to inshore waters at this latitude. A subadult PARASITIC JAEGER toyed with the shearwater flocks a couple times. That bird even came to check out our boat; this is something Pomarines and Long-tails will readily do, but Parasitics tend to shy away from vessels...at least the ones I'm on!


The occasional COMMON TERN or two moved through, and two immature NORTHERN GANNETS were present as well. The surprise of the day came as we were nearing the end of our time at Butterfish when a light morph NORTHERN FULMAR came buzzing into our chum slick. The bird made a few passes around the boat before settling into the slick itself for a few minutes.


Bottlenose Dolphins stole the show for a while, when a couple pods of 4-6 animals quickly multiplied and were flanking us from all sides. They put on quite a display breaching and bow-riding for several minutes. The view from the flybridge was awesome. 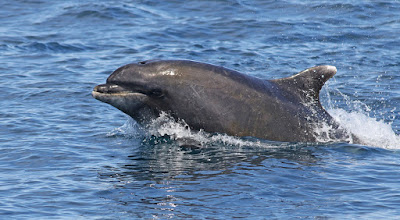 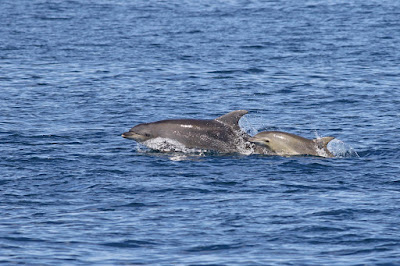 Once early afternoon came, the high clouds from an incoming low began to hide the sun. We took this as a sign to head for home. Seas remained calm, and the rain held off until we were nearly back to dock in CT.

When you live in central CT, getting on a boat a half-hour from home, having a day on the water like this, and getting home before dinner is a dream scenario. Tough to beat!