June 25, 2017
Twice during mid-June I spent a few afternoon hours kayaking parts of the Quinnipiac River and its marshes in North Haven, CT. Paddling in here during the breeding season had been high on my list of things to do since hearing two Clapper/King Rails there about three years ago. Being upriver without spartina grass in sight and within earshot of Virginia Rails, I had assumed them to be King Rails. This, however, was in error. I was a bit surprised when, in following up on these birds, I watched a perfectly normal-looking Clapper Rail wander out of the phragmites and into plain sight. So much for the King Rail assumption.

Subsequent research on this topic revealed records of both Clapper and King Rails from this marsh dating back to the 90s. I have no idea, to this point, of the ratio of Clapper to King. It could be that there's enough salt water up there to be a perfectly fine place for Clapper Rails to breed, with the occasional overshoot King Rail; this is the case along the CT coast in general. But, what if the situation is more interesting than that? This marsh is mostly inaccessible except by boat thanks to few public access points, and those few land-based spots are hardly ever birded anyway.

On top of that, there are supposedly breeding Least Bittern in that same complex. This is clearly a fascinating section of tidal river marsh where a contiguous brackish waterway hosts some species tied to freshwater and others allied closely to saltwater.

I was very unsure what I would find, if anything at all, during these excursions. I paddled upriver and down, detouring through narrow side channels as the tides allowed.

This was a very pleasant kayak. The currents through the main channel are not strong, and there are several places to detour deeper into the marshes. 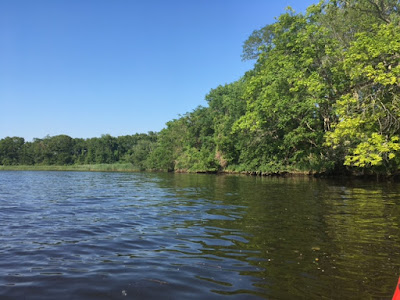 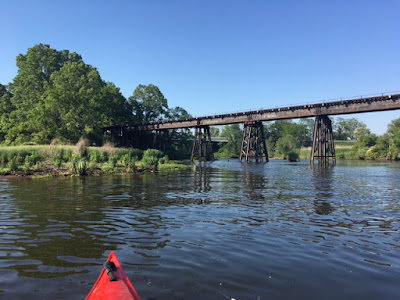 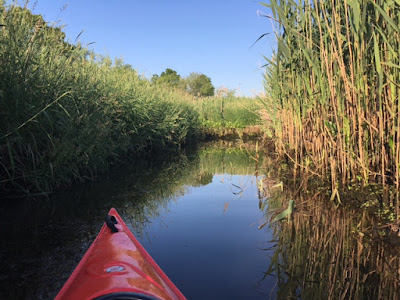 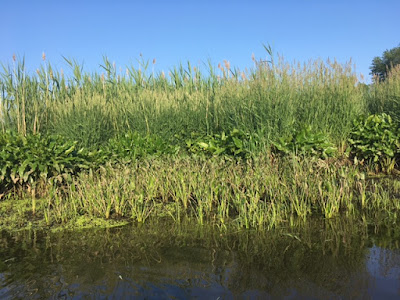 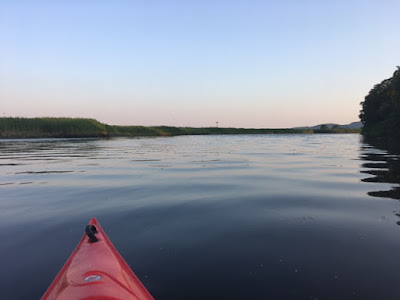 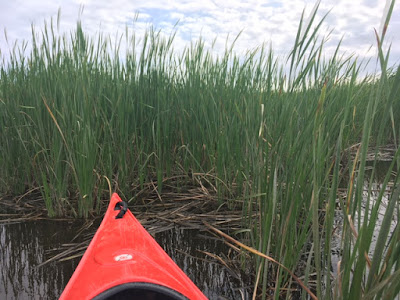 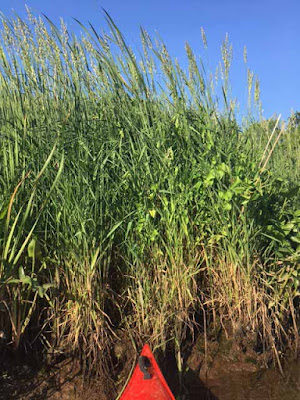 Birdlife was dominated by OSPREY, four species of swallow, and your usual assortment of songbirds that called the riverbank home. There were an impressive number of SPOTTED SANDPIPERS along my route; I estimated 8 or so adults. Both BLACK and TURKEY VULTURES were often in view overhead. I was surprised not to see any Bald Eagles, as there is an active nest along this marsh and often some nonbreeding immatures as well. The most abundant bird in the marsh itself was undoubtedly MARSH WREN. There were always at least a few singing within earshot no matter where I was.

There were several muskrats in the river. This was historically a well-known site for trapping this species.


There were marsh birds to be seen and heard, as I had hoped. Though not exactly vociferous, four VIRGINIA RAILS were intermittently calling, one of which I caught a fleeting glimpse. Right around sunset of my first excursion a silent LEAST BITTERN appeared along the bank the main river itself, feeding just below some phragmites. Yep, they are here.


Very near the bittern sighting, also right along the main phragmites-dominated river, three large rails called. This was also rather close to the spot where I had laid eyes on the Clapper Rail a year or two prior. Unfortunately, and frustratingly, I was not able to get a visual of any of these birds.

It is likely that these are all Clapper Rails, I guess. But given the brackish water, the presence of freshwater-associated birds and plants, and the history of King Rail being seen here, I would like to get a look at as many of these large rails as possible. Who knows...there could be a King Rail or hybrids lurking in there somewhere. I hope to get back in there sometime later this summer.