July 02, 2019
Right around the New Year I put out a feeler to some friends in hopes of quickly arranging a June visit to Alaska. Just as it seemed that nothing would come together in time, Tom Auer generously asked if I was interested in joining a small group that he had already organized on the front end of this year's AOS meeting in Anchorage. Their dates fit perfectly into mine, and I rushed to book lodging...just in time to find some of the last availability in Utqiagvik (Barrow).

We would bird Nome and Barrow as a group. On the front end, I would visit Denali on my own. On the back end, I'd do a Kenai Fjords trip out of Seward before flying home ahead of their conference.

6/12
The aeroplane touched down in Anchorage at 1am on June 12th; I picked up the rental car and went to look for what has probably become one of the most-seen mega rarities in Alaska's history, the continuing drake FALCATED DUCK at Potter Marsh, just south of town. I arrived by 3am, and though there is no full darkness in Anchorage around the summer solstice, it was not quite light enough to identify much of anything by sight. Perfect time for a car nap. When the alarm went off at 3:45, there was just enough light to work with, and the duck was pretty close to the road with a mixed flock of American Wigeon, Gadwall, and Mallard. I had been prepared to wait a while, as this bird had been very hit or miss for the duration of its stay. Not a bad start!

Tempted to bolt northward towards Denali, I really had all day to get there, so decided to stop at another local birding hotspot, Westchester Lagoon. Known for migrant shorebirds, there weren't many of those today. I didn't hit the right tide (you want high for birds roosting on the islands), and we were getting late in the northbound migration anyway. The extensive mudflats west of the lagoon didn't have much other than several BONAPARTE'S GULLS. This is a known Hudsonian Godwit stopover site.

After a great breakfast-to-go at the Fire Island Rustic Bakeshop it was time for the long drive to Denali National Park. My first "HARLAN'S" RED-TAILED HAWKS en route were an early highlight.

I had planned a visit to the "Sockeye Burn" north of Willow and was able to find the place without much trouble. OLIVE-SIDED and ALDER FLYCATCHERS were common. Landlocked Ave held several woodpeckers, including a cooperative BLACK-BACKED and a vocal and active AMERICAN THREE-TOED.

Activity waned through the morning, and I continued north, only making one roadside stop that held the first of many singing GRAY-CHEEKED THRUSHES of the trip. Denali (AKA Mount McKinley) was not in view as I approached from the south, shrouded in clouds - this is apparently the case most of the time.

I made good time and checked right into my place near the park. I slept through the afternoon and grabbed dinner and beer at the 49th State Brewery in Healy - also recommended. Great atmosphere here with many seasonal employees about; not many tourists on this night.

6/13
After a couple more hours' sleep I was at the Denali Bus Depot at 5:30am to catch the 6am transit bus to the Eielson Visitor Center. Private vehicles are only allowed along the first 15 or so miles into the park, which barely scratches the surface, so you need to take one of a variety of buses into the park. I chose the non-narrated transit option, which does make a few scheduled stops along the way.

On the upside, we had a bright, sunny and warm day, so Denali was in view in all its glory. The massive snow-covered peak was more impressive than I had imagined and was every bit worth the effort to see. We were lucky to have a clear morning for viewing. 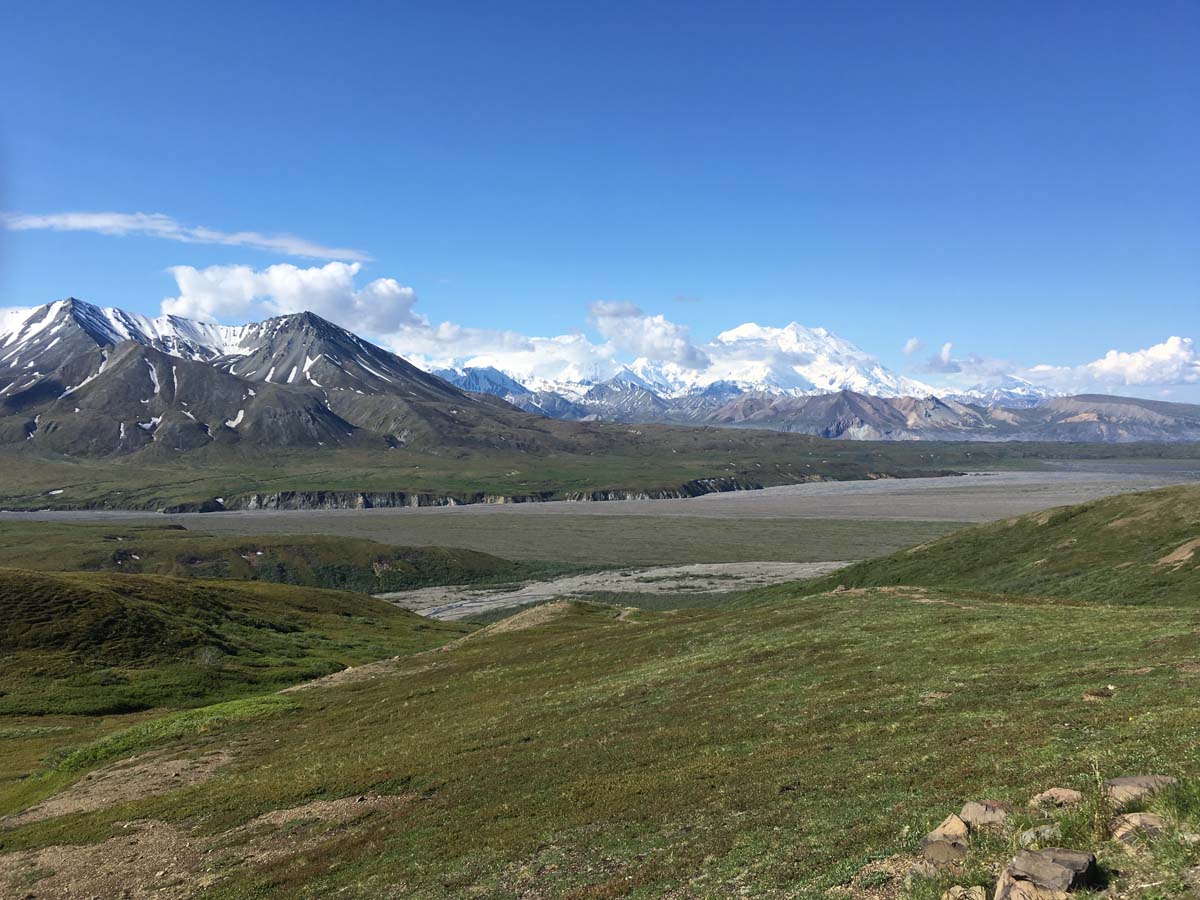 On the downside, we had a bright, sunny and warm day. Birds were quiet and the mammals were hardly evident. Other than some scattered CARIBOU in the valley and a few parties of DALL SHEEP (always a crowd pleaser) up the hills, we didn't see much else in the category of large furry animals. We entirely missed Grizzly Bear, and it was not for lack of trying.

Birds in the park via bus were highlighted by a gray adult GYRFALCON at Polychrome Pass and my first ARCTIC WARBLER of the trip. On the bus ride out, a NORTHERN HAWK-OWL was teed-up in the boreal forest section towards the entrance - a nice surprise as they had not been seen reliably at all this season.

Given the warm weather and scarce mammal activity, I figured it best to call it a day earlier than anticipated with the goal of being out for sunrise the next day.

6/14
The plan was to spend the first few hours of sunlight along the public portion of the park road in hopes of relocating yesterday's hawk-owl or finding a Grizzly Bear. Neither came to fruition, but I didn't pass up the opportunity to score views of VARIED THRUSH and BOREAL CHICKADEE. WHITE-WINGED CROSSBILLS and REDPOLLS zipped around all morning.


At this point I had a decision to make - continue directly back towards Anchorage or detour down the Denali Highway in search of Smith's Longspur and likely a much birdier experience than inside the park itself. That would have added four hours of driving alone, nevermind the walking that I wanted to do. Supposedly a beautiful road, it will have to wait until next time.

On my way back I did stop in to Arctic Valley (ski area) with intentions of hiking for ptarmigan. Upon arrival I was met by many hikers, nearly as many dogs, bright sun, heat, and wind. Not exactly ideal for what I wanted to accomplish. After a short walk for exercise, that was it. Nome awaits!