July 20, 2019
June 19
For this leg of the journey, we traded Matt (who was going to wander around Denali for a few days) for Sarah Dzielski. The four of us touched down that evening in Utqiagvik (Barrow), where we were greeted with bright sunny skies and warmer-than-expected temperatures.

Disclaimer: Our few days in Utqiagvik were a bit of a blur, so this may not all be in perfect order! 24-hour sunlight and a very irregular [read: lacking] sleep schedule made our time there feel a bit like one really extended daytime period...which technically isn't wrong. Up there, north of the Arctic Circle, the sun doesn't set at this time of year.

We had prepared for seasonably cool temperatures (think 35-40 degrees Fahrenheit) with unpredictable cloud cover. We were kinda thrilled to feel much warmer than this, at least for most of our time there.

Anyway, that first evening involved looking unsuccessfully for the Little Stint that had been found near town just the day or two before. We oriented ourselves around town and spent some time along Cake Eater Road, one of the better birding roads in the area. We didn't make it as far as we should have thanks to the constant presence of RED PHALAROPES that were begging to be photographed.

June 20-21
The next morning we caught up with the LITTLE STINT near the base of Cake Eater Road. This was a bright adult in high breeding plumage that couldn't really be confused with anything else!


From there we continued down Cake Eater and Gas Well Roads. PECTORAL SANDPIPERS were abundant and actively "booming" their way across the tundra. POMARINE and PARASITIC JAEGERS patrolled the land. Our first of many LONG-BILLED DOWITCHERS made an appearance.

After some time, we managed to find a pair of STELLER'S EIDER, which held our attention for a minute.


Tempted by the day's unseasonably warm temperatures (well into the 60s), Tom, Sarah and I talked ourselves into taking the Polar Plunge in the heat of the day. The iciness of that water is difficult to describe in words, but I can say that after only 20 seconds or so my feet were already tingling. Props to Tom for urging us to do this and being the first one in the water. 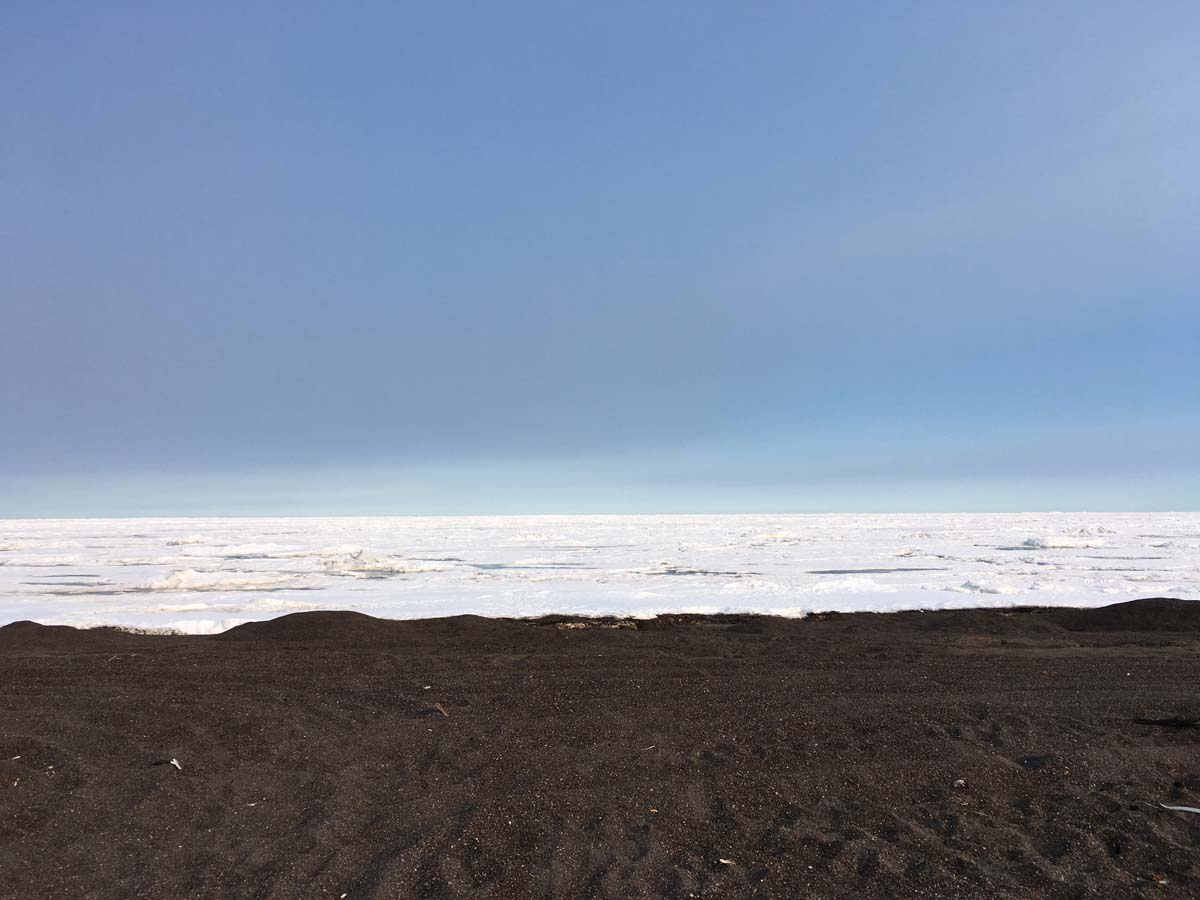 Turns out, quitting birding is not easy when it's sunny all the time. Tom and Sean took well-deserved afternoon naps while the sun was at its brightest in the mid-afternoon, but Sarah and I couldn't flip the switch to "off" so kept birding. Our efforts paid off, albeit briefly, in the form of an adult "VEGA" HERRING GULL that whipped past on its way to the landfill off Gas Well Road.

The four of us reconvened for a wonderfully sunny evening around Freshwater Lake, where courting PACIFIC LOONS stole the show for a while. As we were on our bellies photographing the loons, a pair of SABINE'S GULLS, which breed at the lake, made a few close passes. The debate over "sexiest gull in the world" rages on, but anyone who doesn't have Sab's in their Top 3 should find another hobby. 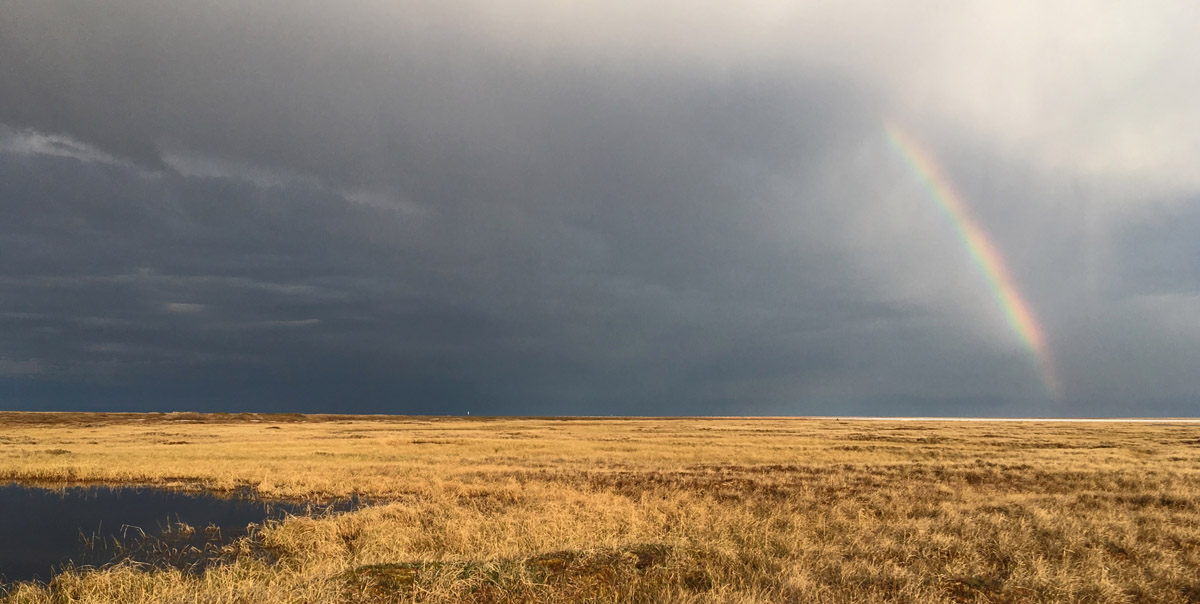 Midnight came and went, and we found ourselves still on the tundra. Up for a bit of a break from birding, we acted on a tip and went in search of Lemmings, the default tundra rodent in these parts. Sure enough, the little buggers were right where we were told they'd be. Resisting the urge to chase down one of them was impossible. If we could catch them this easily, they must make for some easy jaeger/owl prey.


Invigorated by the stunning golden sunlight amid crystal clear skies, Sarah and I decided we would bird through the "night" while Tom and Sean slept a bit. Looking back, this was a great decision and a surreal experience. Imagine the still, windless tundra cloaked for hours in the sort of sunlight you can only briefly enjoy just after sunrise or before sunset at the lower latitudes we call home. A complete lack of manmade sound - no humans, no vehicles. But this does not mean silence, because shorebirds are displaying in all directions, and Pacific Loons are yodeling all around you, at the top of their lungs. A pair of SPECTACLED EIDER were much closer to the road than usual. Oh hey, there's a bright-eyed male Snowy Owl hunting on that slope, and a dark-morph Parasitic Jaeger drifting between us and the owl. I'm not sure if it was this ambiance, or the lack of sleep, or a bit of both...but I definitely felt like I was in a bit of a trance as we stood there.


Before and after tundra time, Sarah and I hit the coast for a bit. We took our obligatory Polar Bear Watch from the base of Point Barrow, but per usual could only turn up loafing ice seals. Of note, a Polar Bear had been seen swimming between masses of sea ice earlier that morning...right near where we swam, actually. Over the course of our stay, we would scan for bears from the base of Point Barrow at least half a dozen times, but we never connected.

The 21st was our last full day in Barrow, and the four of us thoroughly enjoyed more of the same tundra birding. A thick fog rolled in that evening, enough to shut down flights in and out of town. There would be no midnight birding on this night. 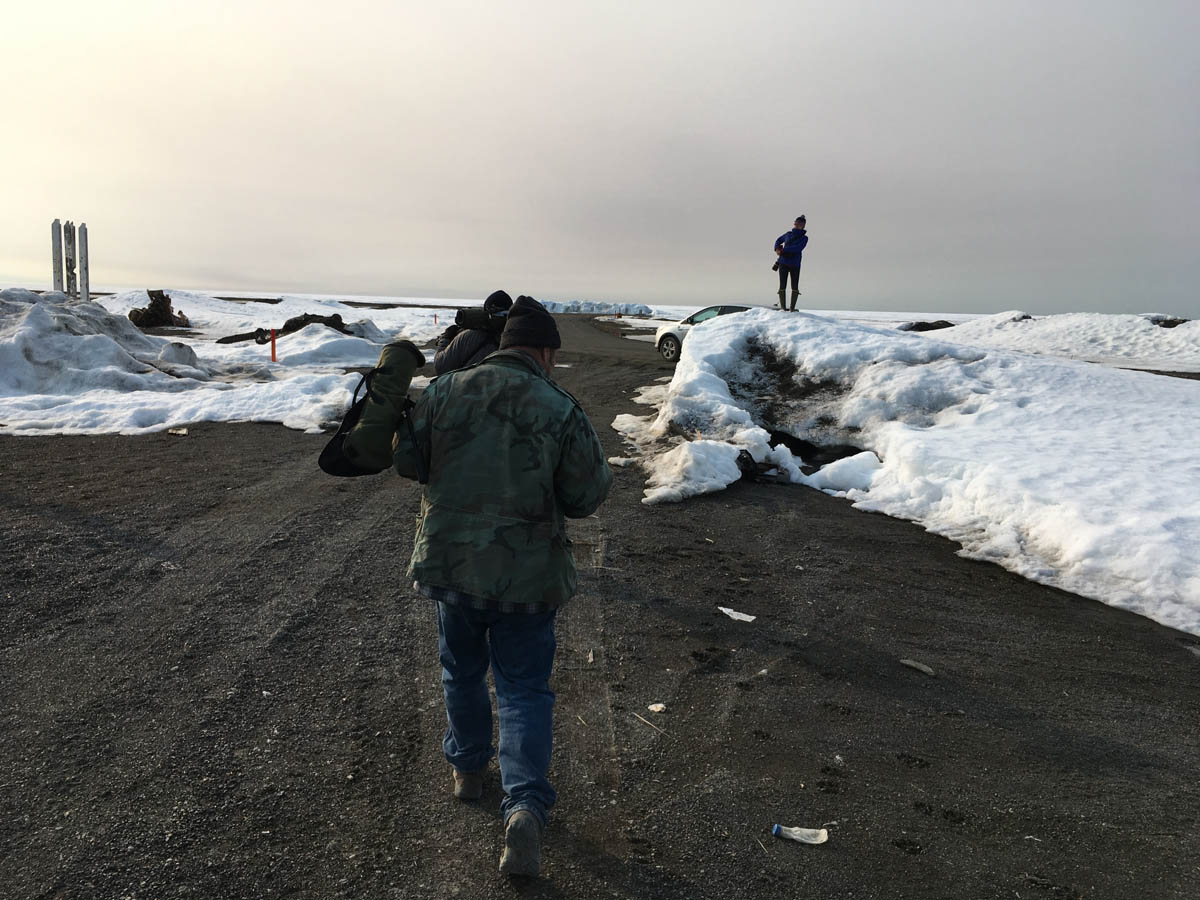 June 22
We had one attainable objective for our last morning here, and that was to score a decent view of YELLOW-BILLED LOON. The species was much more elusive than we were expecting going in, and thus far we had only seen a few distant flybys along the coast. Luckily we stumbled across the Field Guides tour led by Tom Johnson and Cory Gregory, which happened to have a couple YBLOs in scopes near the edge of the pack ice. Still not the killer views we were hoping for, but was still nice to get them on the water.

Tom, Sean and Sarah flew out late morning to begin their few days on the Kenai Peninsula. I could not get on the same flight as my three companions so had to settle for an evening departure. Forced to bird Utqiagvik for a few more hours wasn't the worst thing, despite the fact that temperatures had returned to normal, and a few snowflakes even began to fall.

I overlapped by a couple hours with Andrew Dreelin, who had just arrived on the plane that would bring Tom, Sean and Sarah to Anchorage. Right off the bat he wanted to check the start of Cake Eater Road for stints...either the Little Stint we had seen a few days prior or the Red-necked that was just found there early that morning. Well, Andrew's timing couldn't have been better, as we had the RED-NECKED STINT already in view, which was briefly joined by the LITTLE STINT. For a brief moment, the two rarities were in the same binocular field. Double stint lifer for Andrew!


Before long it was time to pack my belongings for my PM flight to Anchorage, a task which I leisurely performed from the bluff by the airport with the scope set up, in case anything interesting flew by. Two whale blows quickly caught my attention, and my mind of course immediately went to Bowhead Whale. However, repeated views revealed them to be GRAY WHALES. Still cool, but not the hoped-for arctic species.

The airport was hectic thanks to the airlines trying to catch up from yesterday's weather cancellations, but my flight left on time and arrived safely in Anchorage that evening.