Spring roundup, looking ahead to Summer

May 29, 2010
The spring shorebird migration is currently in full swing in the northeast. Thusfar in CT the highlights have been a few Red Knot and Whimbrel, which are uncommon but expected at this season. Things have been quiet on the rarity front across this state. Neighboring states have enjoyed a few nice surprises, with the highlight probably being a lapponica Bar-tailed Godwit at Brigantine in New Jersey. A smattering of Wilson's Plovers in the northeast included one bird in Maine. Otherwise things have been quiet.

The spring migration so far seems to have been about average from my point of view, which is based on no actual evidence but rather an observation of the regional reports :) There seems to have been several good migration days with no real big fallouts nor any periods of drought. We never had any extensive blocking weather in CT, nor prolonged periods of perfect migration weather, so the migration was able to proceed pretty much on schedule with a nice pulse of arrivals every few days or so.

Now the passerines are winding down, the shorebirds are just about peaking, and we're into the heat of the breeding season. June still has migrant/vagrant potential though. And this is a fine time of year to get on a pelagic trip...I'll be on one going out of Rhode Island next Saturday.

I've made two visits to Sandy Point in West Haven, CT this past week. Highlights included a few species we missed on our Big Day this year: Whimbrel, Red-breasted Merganser, and Laughing Gull. Last summer's major surprise was the abandonment of the nesting colony by Least and Common Terns at Sandy Pt. Earlier this month there were many pairs of Leasties and a few Commons apparently setting up at the colony for a summer of nesting, but reports from the last couple days indicate that the terns have again abandoned the colony. Hopefully they will breed here when all is said and done. 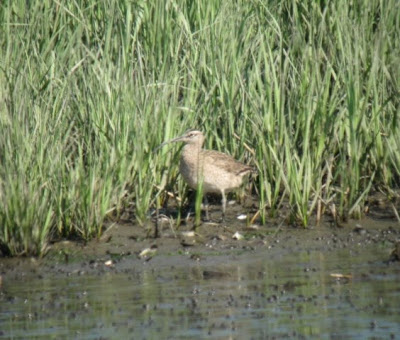 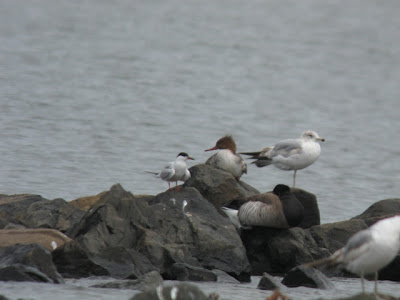