September 11, 2010
On Thursday evening I was one of about 40 birders to board the 90' Gail Frances for an overnight pelagic trip to Block Canyon. The canyon lies at the edge of the Continental Shelf. We departed around 10pm so that we would be at the canyon for dawn. 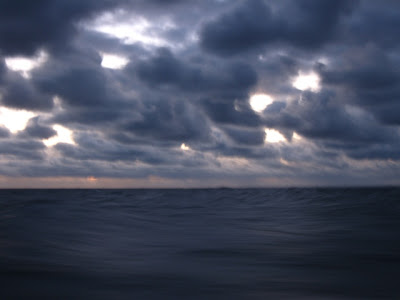 just before sunrise
This trip was one of quality over quantity. Very few birds were tallied, leaving a few pelagic newbies understandably unsatisfied. But for those of us who have been on several deep-water pelagics off New England, we were happy to sacrifice common species for rarities. That is, after all, the idea of doing these canyon trips. The common shearwaters, storm-petrels, and jaegers can be seen inshore. But the warm, blue water of the shelf edge gives us hope for species rare to New England.

Our first notable birds were a few scattered AUDUBON'S SHEARWATERS, an expected species in these warm waters. We ended up tallying 11 for the day. 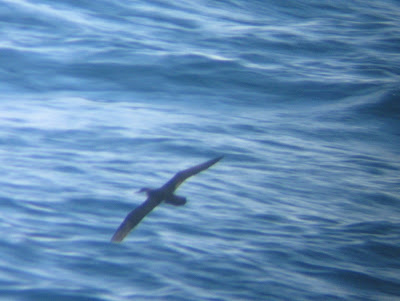 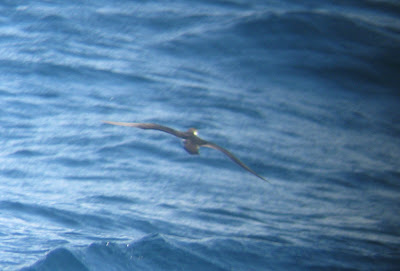 a very fresh Audubon's Shearwater
It didn't take long for someone to spot a jaeger in front of us. This bird cooperated and all had looks at a juvenile LONG-TAILED JAEGER. This is the most sought-after jaeger among birders around here due to its rarity inshore, but it is actually the most common jaeger this far offshore. A trip to these waters at this time of year gives one a great chance at seeing multiple juveniles of this species.

The jaeger ended up harassing every bird in sight...all 3 of them. In fact, the jaeger was finding the birds for us. First a Great Shearwater, then a storm-petrel or two, one of which may have been a Band-rump/Leach's-type but got away. Then it moved far off and began to chase another bird that I (and I think pretty much everyone else) assumed was the same Great Shearwater at first. But someone (I think Blair Nikula) yelled "BLACK-CAPPED PETREL," and the bird banked again to flash its white rump. It was much too far to discern any real detail, such as whether it was a member of the whiter-faced or dark-faced group. Carlos Pedro was impressively able to grab a photo that showed the general upperpart pattern of the bird. This was a 3rd record for Rhode Island.

We soon ran into a second juvenile LONG-TAILED JAEGER, which also put on a great show around the boat. Photographers would have nailed it if not for the dark skies and intermittent rain showers. 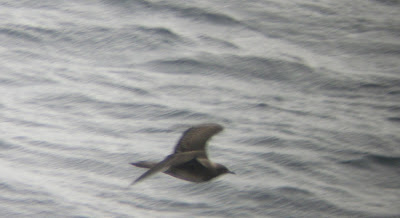 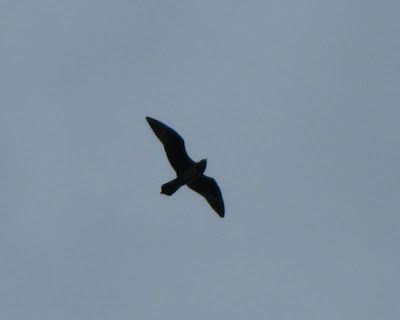 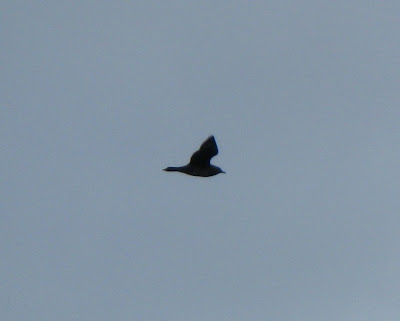 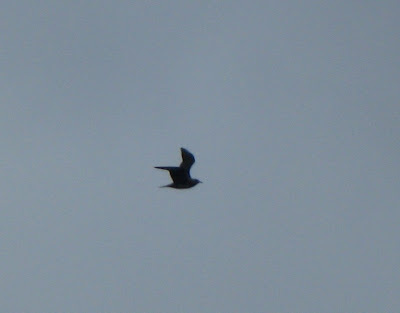 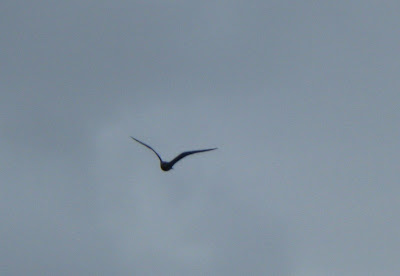 juv Long-tailed Jaeger
As we continued to cruise at depths of around 3,000 feet and temps of ~79 degrees, I spotted a lone storm-petrel on the water. I alerted the captain and we slowly approached the bird. It looked intriguing from the very beginning, appearing large and entirely dark from a distance. Thoughts of Swinhoe's quickly vanished though, when some white became visible at the side of the rump. The bird allowed us to get reasonably close before flushing. When it did, it revealed a narrow but complete white rump and squarish tail (certainly not forked). Its wings were long, slightly bent at the wrist, and it took steady wingbeats with a couple of brief glides on slightly bowed wings. Initial impressions were strongly for Band-rumped Storm-Petrel. Photos by other birders confirmed our field ID as BAND-RUMPED STORM-PETREL, a first record for Rhode Island (if accepted).

The next several hours were very slow, with few birds to be seen, common or otherwise.

Of note, all of our best birds were at or east of the canyon. The water to the west was dead. In general, it seems like a good idea to get as far east as you can along these southern New England canyons during late summer. It just seems to be birdier at the eastern canyons, but pretty quiet to the far west (i.e. Hudson Canyon), if the small sample of summer deep-water pelagics are any indication.

Overall the trip was a success. I would have happily traded many common species for the couple mega rarities we had. Hopefully this trip becomes an annual one, though it needs some improvements for the sake of the participants. First, a faster boat would be preferable if the Frances Fleet has one available. Second, there were no designated leaders on this trip. Third, nobody was stationed on the PA system (which was poor anyway), which really hindered communication between the spotters and the rest of the boat. I jumped on the mic a few times to announce some things, but most communication between passengers was done by yelling, which isn't totally effective.

This was my only chance to get offshore this summer, so I'm thrilled it was a quality trip. One of these days I'll have to look into getting a real camera. Digibinning just doesn't work for me at sea. 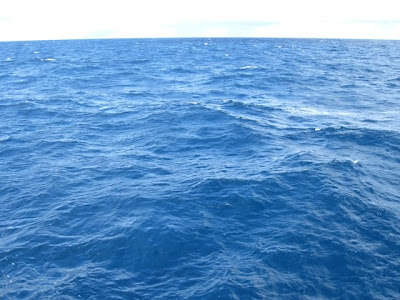