April 30, 2011
We started our morning in Gunnison very predictably...at the GUNNISON SAGE-GROUSE lek at Waunita Hot Springs. We used our scopes from the car to enjoy the 35 distant lekking birds (19 males, 16 females). Not long after sunrise a Golden Eagle spooked most of the birds. A few birds lingered a while longer, but the show was over within an hour of sunrise (as it often is, thanks to eagles and coyotes). 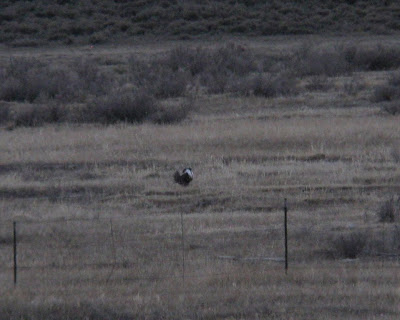 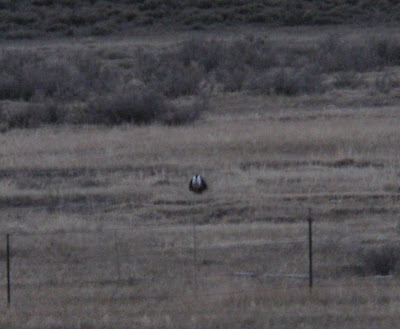 Gunnison Sage-Grouse
Next up was our decision to spend the rest of the morning searching for rosy-finches. The only somewhat reliable location for these birds recently had come from Crested Butte. The rosy-finches are largely weather-dependent; they visit feeders during cold or inclement weather, but may be entirely absent on nice days. As our luck would have it, a cold front was scheduled to move into the area during the morning, bringing dropping temps and some snow to higher elevations. Perfect recipe for rosies.

The first set of feeders, close to Gunnison, had just a single Brown-capped Rosy-finch. Not exactly the mega flock we were looking for. We continued north (and up) to Crested Butte. Here, downtown feeders held a flock of 50 Brown-caps with a single "Hepburn's" Gray-crowned Rosy-finch. We hoped the flock would grow as the flurries began to fall, but it didn't happen. So we continued up the slope to the Mount Crested Butte ski community. As we were driving the winding roads we spotted a large flock swirling around a few houses. Once we found a way to reach those homes, we found the large flock we were looking for. We had more than 300 ROSY-FINCHES with all 3 species (including more "Hepburn's" Gray-crowned) being represented. About a half-dozen BLACK ROSY-FINCHES really stood out among the crowd. We were thrilled. 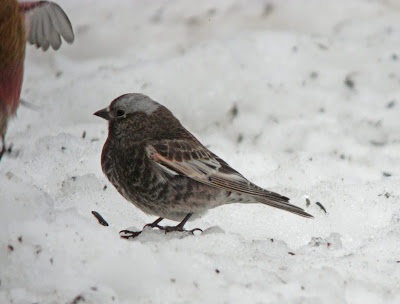 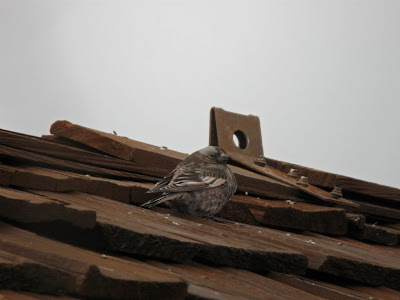 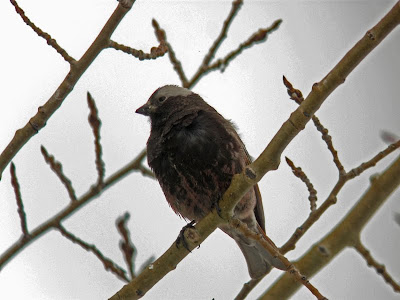 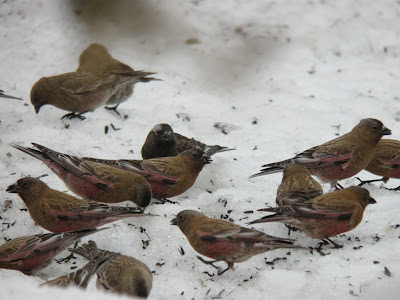 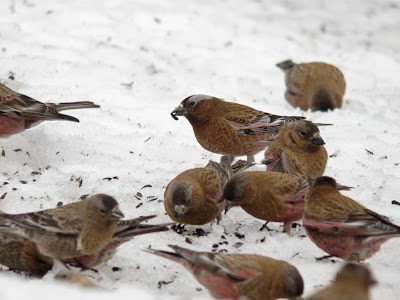 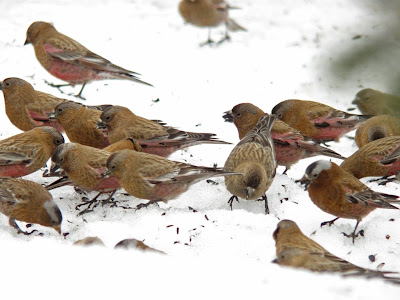 a Gray-crowned Rosy-finch among Brown-capped 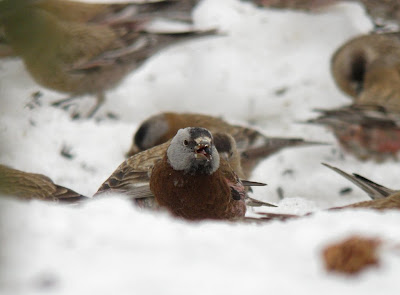 a "Hepburn's" Gray-crowned among Brown-capped 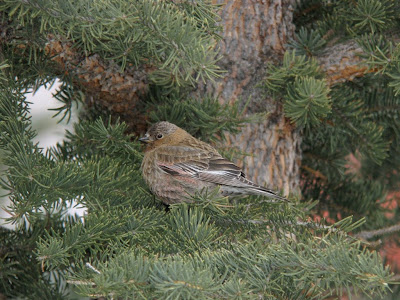 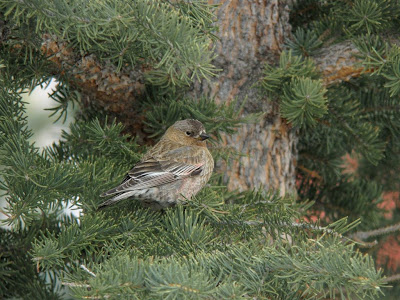 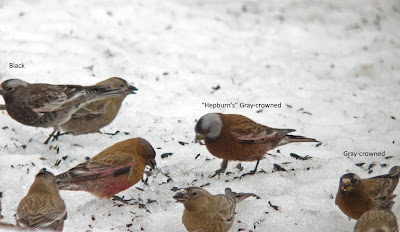 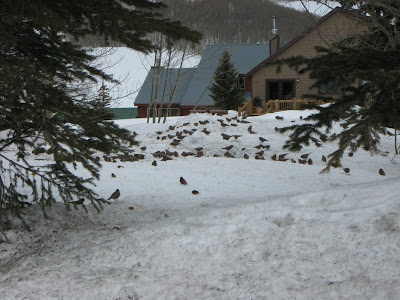 a mess of rosies on the snow
After watching them for a while we had to pull ourselves away because we had a 6-hour drive ahead of us with several birding stops planned along the way.

While on a quick search for Pinyon Jay, we found ourselves on Fremont County Road 160, where we lucked into a Prairie Falcon right along the roadside. Killer looks from the car. Further east along the Arkansas River Valley, we found two small herds of BIGHORN SHEEP visible from Route 50. 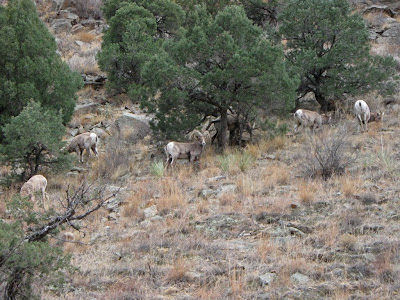 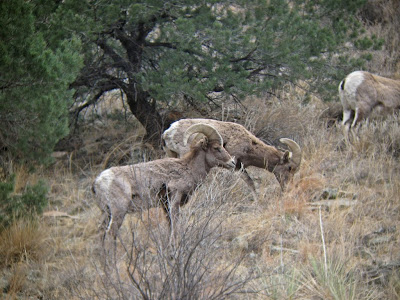 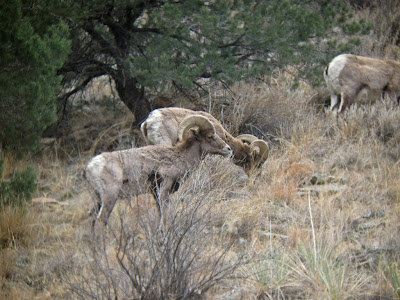 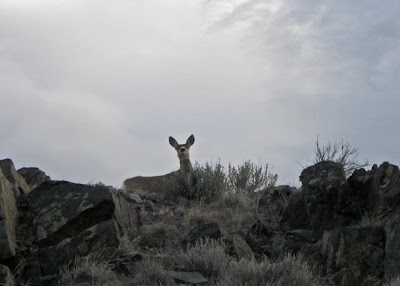 a curious Mule Deer
We dipped on Pinyon Jay a couple more times before continuing further east, where we would also dip on Mountain Plover in Boone. No worries though, as we would have better shots at these species later in the trip. We ended the day checking a few lakes and reservoirs west of Lamar for migrant shorebirds and waterfowl, but our results weren't very impressive. This was partly because of the incredible winds that had built in behind the cold front. We could barely stand upright in the wind, and the lakes were dotted with whitecaps. Not very conducive to birding. We ticked a bunch of waterfowl species, including a few we don't see often in the east like Cinnamon Teal. But we didn't find the Snowy Plover or Long-billed Curlew we would have liked to see. 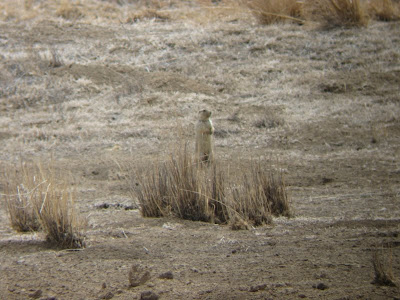 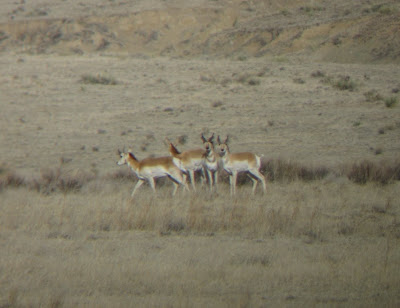 Pronghorn
The most impressive part of the afternoon was clearly the weather. Not just the wind, but the temperature changes. The high temp in Lamar at 1pm was 85 degrees. When we drove into town at 8pm, it was 35 degrees and snowing. Pretty amazing.