[Note: Click to enlarge photos, as usual. Blogger is undergoing a formatting change and there are clearly issues to work out. Thumbnails of photos are showing as very soft, for whatever reason.]

On Saturday I set out to challenge my personal best record of 21 shorebird species seen in one day in Connecticut (set twice; once with both Willet forms, so potential for 22 someday) . With a couple lingering rarities at Milford Pt coinciding with the typical peak of diversity in the state, I thought there was a decent chance to beat it. I try to do this once or twice per summer - once in late July when diversity is lower but rarity potential (i.e. stints) is high, and once in late Aug/early Sept when diversity is at its peak. My previous 21-species days were Aug 30, 2008 and Aug 21, 2009.
Phil Rusch joined me for most of the day. We started just after sunrise at Griswold Pt in Old Lyme where the tide was middle falling. Plenty of birds were around, actively feeding along the shoreline as the tide dropped. They would disperse further and further as the tide went out. As we walked out the point we stumbled across our first Spotted Sandpipers and both yellowlegs. A Clapper Rail made a brief appearance along the marsh's edge, and a few FORSTER'S TERNS worked just offshore. Our first "quality" shorebirds of the day were two PECTORAL SANDPIPERS, a late adult and a fresh juvenile. It's not a terribly uncommon species by any means, but it's far from a guarantee.

We continued our walk out and spotted a molting adult AMERICAN GOLDEN-PLOVER feeding in the wrack line. Further down the beach the wrack expanded in the form of a large amount of washed up seaweed - probably enhanced by the recently passed Hurricane Irene. Insects were swarming over the wrack which in turn was attracting shorebirds. Soon after the AGPL we picked up on a juvenile BAIRD'S SANDPIPER, also in the wrack. As we advanced further, we kept refinding the Baird's (there could have been more than one) which relocated on a newly exposed peat-like spongy mudflat along with two WHITE-RUMPED SANDPIPERS. While going through the peep, Phil put his bins down, looked right in front of us, and noticed a juvenile BUFF-BREASTED SANDPIPER walking towards us, seemingly oblivious to our presence. I pulled out the camera and took some photos before it began to notice our presence and keep more of a distance. All in that small stretch of beach we did great with the uncommon 'grasspipers' plus a couple other good shorebirds, all giving fantastic and prolonged looks. The day was off to a great start. 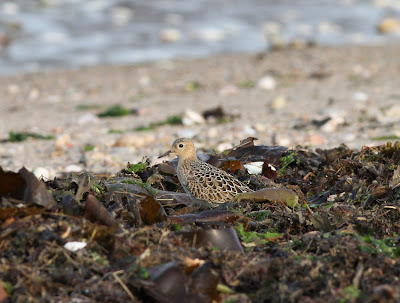 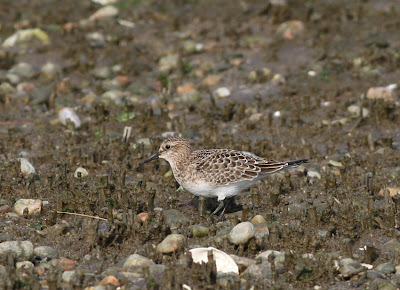 Baird's Sandpiper
After leaving the Gris we grabbed breakfast and headed for Hammonasset Beach State Park. The east end of the park yielded very little...not even a single Killdeer on the Nature Center lawns. Here we met up with Bill Asteriades who had arrived before us but also found the birding slow. Before we left we went to check the west end, but it was closed to vehicles due to storm damage. We parked and walked in far enough to give us a view of some of the lawns. No obvious rain puddles and no shorebirds...still no Killdeer. Bill headed to Barn Island to search for the continuing White Ibis he needed for his state Big Year (which is looking to be on pace to become the new Connecticut record).

Our next stop was Sandy Point in West Haven on the low rising tide. Sandy Pt is a hit-or-miss site when it comes to migrant shorebirds. On some days the place is teeming, but on other days it's quiet. This was one of the quieter days, but we did have a very nice count of 11 juvenile RED KNOT and our first American Oystercatchers of the day. At this point we did some math and found that we were already at 18 species of shorebird before even getting to some of the best shorebird habitat of the day in Milford & Stratford at the mouth of the Housatonic River. Things were looking good! 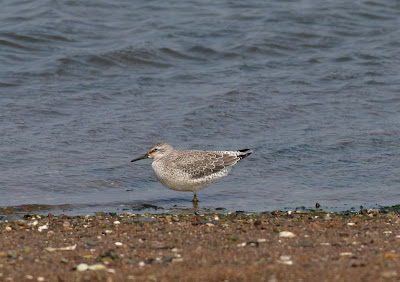 Red Knot
We arrived at Milford Point at mid-tide and first checked the marsh side, where the Black-necked Stilt and American Avocet had been spending most of their time. From the top level of the observation tower a couple were already on the AVOCET, which was roosting distantly in the marsh. When the water got high enough the bird flew out to the tip of the point itself. No sign of the stilt. A few juvenile Yellow-crowned Night-herons were scattered throughout the marsh. 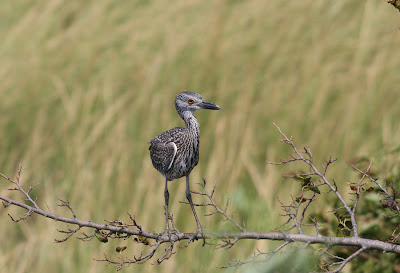 Yellow-crowned Night-Heron
We left the marsh side and went out to the beach, where the main high tide shorebird roost is located. First notable birds seen were actually a group of 5 juvenile BLACK SKIMMERS and a few more FORSTER'S TERNS foraging. 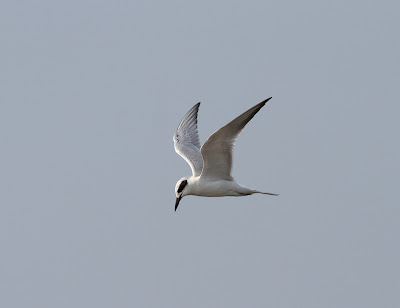 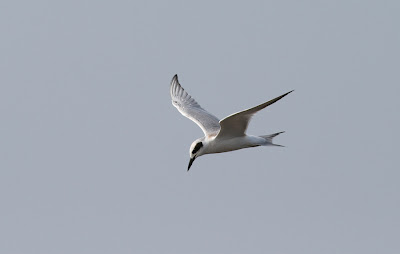 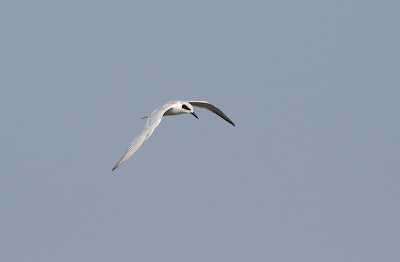 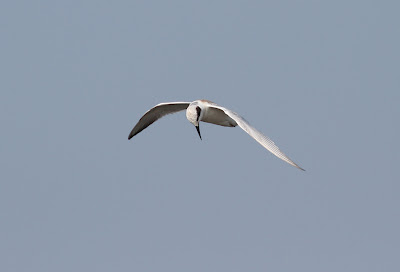 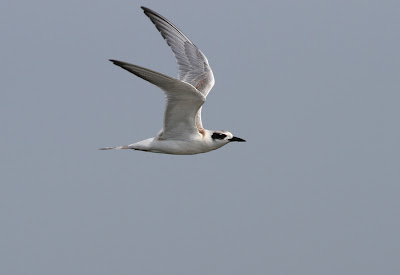 Forster's Terns
Knowing that the Avocet was out there and the stilt was also likely nearby, we decided to walk out to the end of the point before dead high tide. Thanks to Mardi Dickinson's help we stumbled across the BLACK-NECKED STILT (20th shorebird of the day) as we accidentally flushed it from the marsh side of the point. The bird ended up trying to find a roosting spot, but had difficulty with the rising tide covering its preferred spots. Out at the end of the point the Avocet continued and allowed for fantastic scope views. We were getting lucky with killer views of most of the day's good birds. 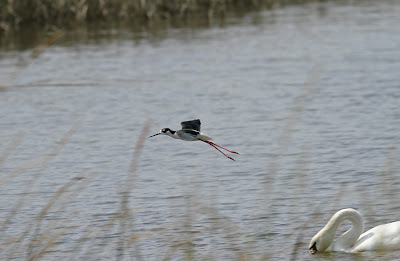 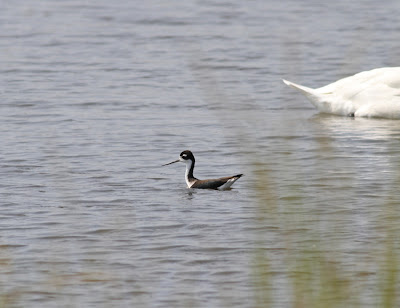 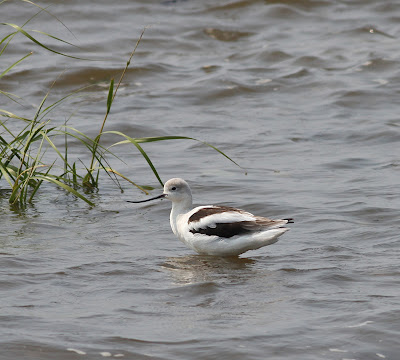 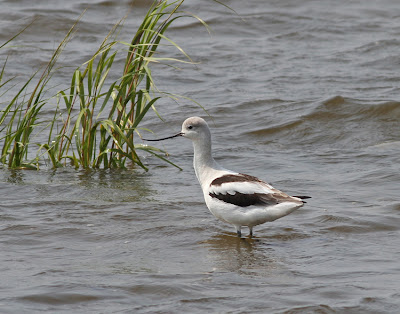 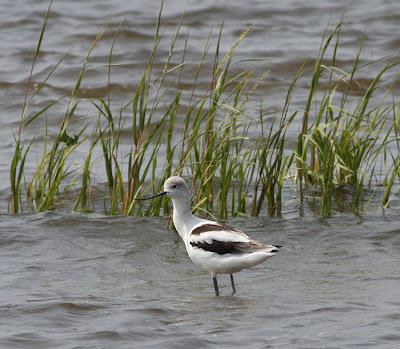 American Avocet
As the tide was nearing high stage, we headed back to the main beach and its shorebird roosts. And there were many shorebirds, divided into several flocks. Our attention was first drawn to a flock of 1000+ peep and Semipalmated Plovers, which we started scouring for less common species. Our WHITE-RUMP count was six, all adults as expected at this point in the season (in contrast, the adult-juv ratio of Semipalmated Sandpiper was about 50:50). After some time we found our first of three juvenile WESTERN SANDPIPERS to complete our "peep sweep" on the day. Phil picked out another AMERICAN GOLDEN-PLOVER in the wrack line, not far from a flock of Black-bellied Plovers and another juv "Eastern" Willet. 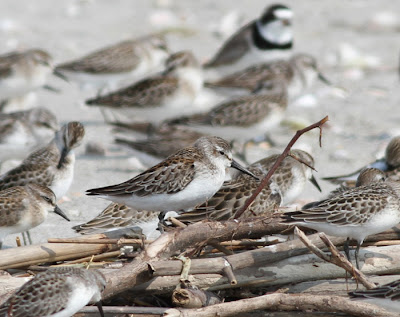 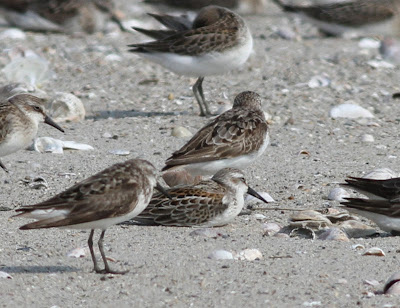 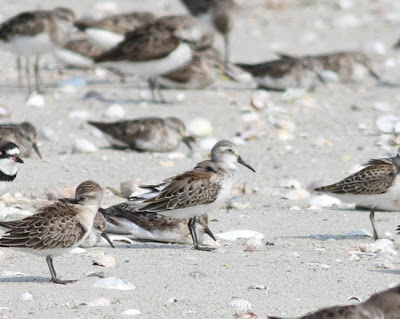 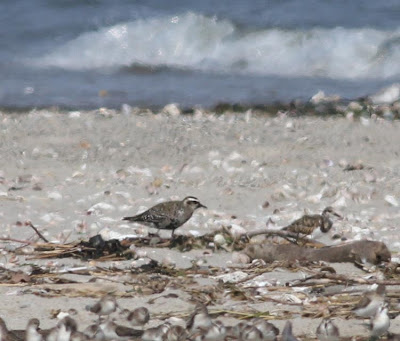 American Golden-Plover
At this point Phil had to get started home, so I continued on my own. I wouldn't turn up anything new by myself, but a fantastic count of 40 juvenile RED KNOTS was my personal high count for the state. 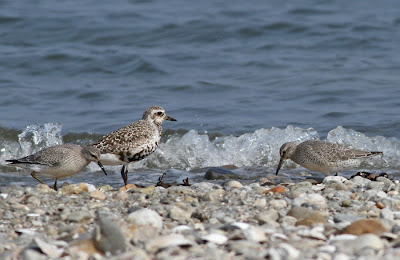 Red Knots with Black-bellied Plover
Next stop was a few Stratford hotspots on the other side of the river. First was the Stratford Marina in hopes of relocating the adult Long-billed Dowitcher that had been reported and Bill had seen the day before. A quick scan of the decrepit pilings upon arrival revealed that LONG-BILLED DOW roosting on a floating piece of wood. The flotsam was being pushed closer and closer by the wind and ended up quiet close, allowing for photography. That made for 22 shorebirds and a new personal single-day record in the state. 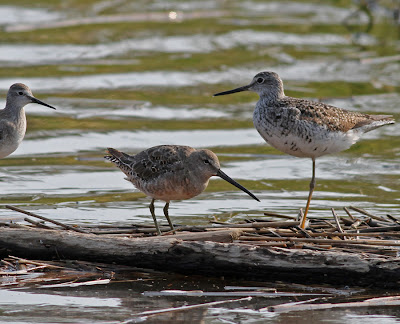 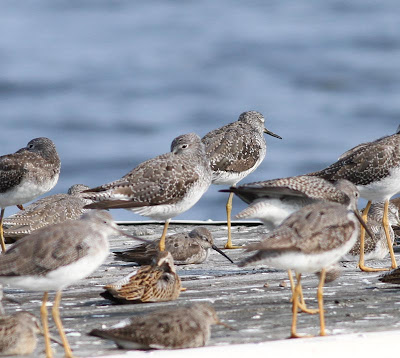 adult Stilt Sandpiper on its belly 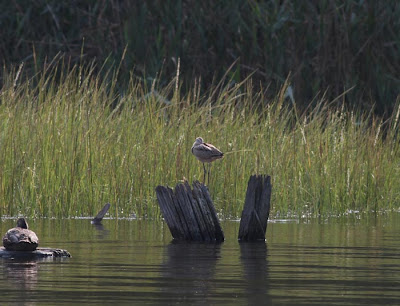 roosting Marbled Godwit
I drove past the Access Road pools which were predictably full of water, so no mudflats for shorebirds. Then onto Sikorsky Airport for a search of the lawns and my last gimmie shorebird...a KILLDEER called as I got out of the car. Phew! Killdeer at 5:00pm! How did that happen? 25 species.

At this point my coastal options were limited. I still needed gettable species like Whimbrel and Piping Plover. I didn't have any great spots in mind for Whimbrel, other than going back to Milford Pt or Sandy Pt and hoping for a new arrival there. The pipers have generally cleared out and I knew it would be a tough bird to get on this day. I had already visited the best locations for them and didn't come up with any. I knew of reports of Solitary Sandpiper and Wilson's Snipe inland, so I decided to chase those birds.

I arrived at Strong Road in South Windsor and the first bird I saw in the farm fields was the CATTLE EGRET found earlier by Jamie Meyers, a very nice bird in CT. I had to work to find the shorebirds but soon found the SOLITARY SANDPIPER. This was a nice collection of shorebirds for an inland location; there were 3 more adult AMERICAN GOLDEN-PLOVERS and 4 adult WHITE-RUMPS. After some scouring I turned up the WILSON'S SNIPE - shorebird #27. 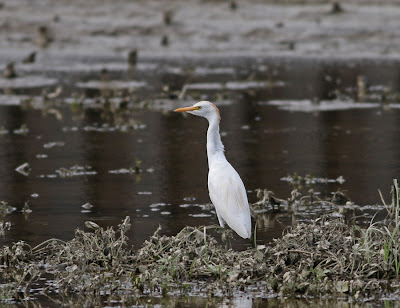 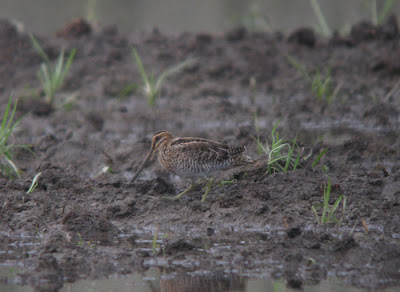 Wilson's Snipe
With some light left I decided to run down to Cabela's in East Hartford to check the pond and lawns for a lingering Upland Sandpiper - no luck. The only shorebirds were a few Killdeer and a Spotted Sandpiper.

That marked the end of my silly little day with a grand total of 27 shorebird species. It was a heck of a day. I still had some misses with the most likely probably being Whimbrel, followed by Piping Plover and Upland Sandpiper, plus some rarities such as Hudsonian Godwit, Ruff, and the phalaropes, and the difficult-to-see American Woodcock. I also did not come across a "Western" Willet, which would have put one in the bank if they're split in the future.

Phil stopped at a couple inland sites on his way home after splitting off from me, and he ended up with 24 species on the day.

It was a really nice day, with many rare or uncommon species included, and some really nice looks to boot.