I know it's mid-April but I wanted to get one last winter gull post up before I turn my attention to more recent happenings. Here are photos of two presumed hybrid GLAUCOUS x GLAUCOUS-WINGED GULLS at La Push, WA on Jan 28, 2013. These birds were part of a killer concentration of large gulls enjoyed by Frank Gallo, Ryan Merrill and myself for several hours on this morning. I'm not sure I've had this much fun standing in pouring rain for so long! We had 8 species plus 3 hybrid combinations. I'll say it again: the next gull ID conference must be held here. If nearby Aberdeen, WA native Kurt Cobain was into gull identification he would still be alive today...although we wouldn't have had the same great 90's grunge to listen to, so maybe things turned out for the best after all...

Then again, perhaps hours of head-scratching while staring at soaking wet hybrid gulls would have resulted in the same sort of depression, angst and drug addiction that produced albums like "Nevermind" or "In Utero."

But onto the birds!  First up is a first cycle individual that looks much like a GWGU in plumage and structure at first glance, but with a few glaring differences. Most obvious are the contrasty pale primaries. Also note the rather parallel-sided bill with strong hint of a GLGU-like two-toned pattern. The ground color of the bird is fine for Glaucous-winged, but note the well-patterned wing coverts, which might also be explained by GLGU genes (most presumed pure first cycle GWGUs seen on this trip were much less patterned above). In flight, again the pale primaries and speckled upperparts stand out. The tail pattern is also a bit more patterned and pale-based than you'd expect on a pure Glaucous-winged. 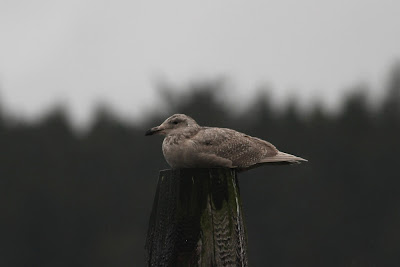 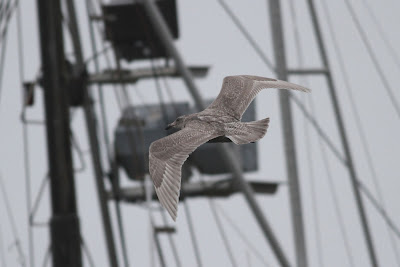 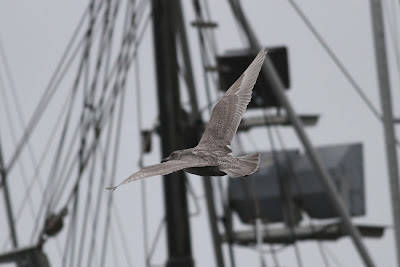 Our other hybrid is in its second or third cycle. This bird appeared more Glaucous-like in size and structure but clearly holds genes of a darker-winged species as well. Note the patterened wingtip, dark tail, darker upperparts - all telling us that this is no pure Glaucous Gull. This bird was huge, perhaps the largest individual among the couple hundred gulls lined up along the wall that day.

As for the darker-winged parent, here is why we went with Glaucous-winged Gull over other likely combinations such as American Herring Gull:

- Dusky iris. At this age, the iris color is intermediate between GLGUxGWGU. If American Herring Gull was the other parent, we would expect a very pale staring iris color by now.
- Upperpart color. A bit paler than the nearby GWGUs, as you'd expect in a hybrid with GLGU. If we were talking GlaucousXHerring, we'd expect a significantly paler mantle color than Glaucous-winged. Perhaps the only benefit of the dreadful weather on this day was our ability to judge shades of gray thanks to a complete lack of sun glare.
- Very faint wingtip pattern, paler than is typical on presumed F1 hybrids of GlaucousXAmerican Herring. However this could be explained by a backcross with more Glaucous than American Herring Gull in it (in which case we would really expect a paler mantle shade). 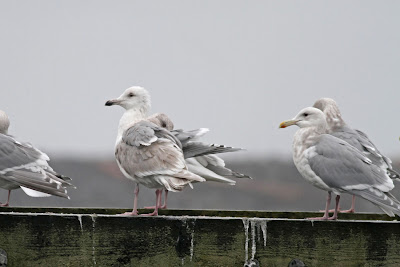 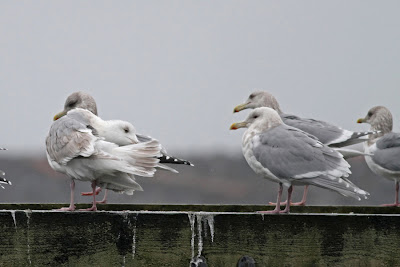 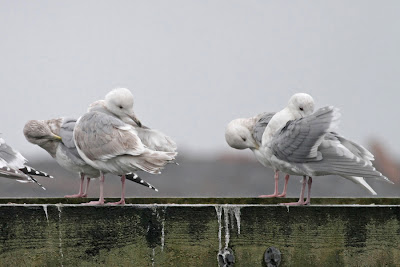 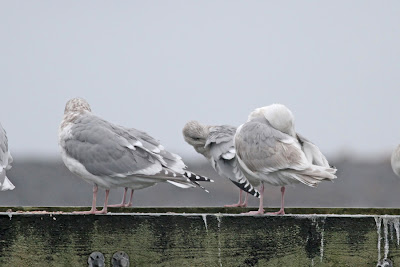 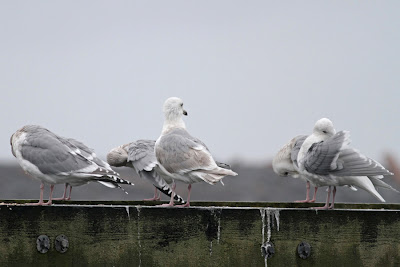 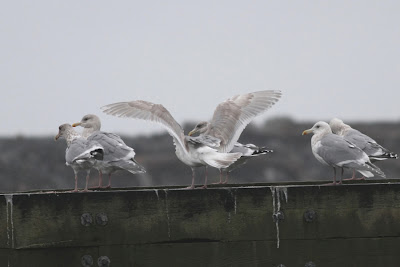 Could these features be explained by a Glaucous Gull with some Vega Gull genes in it? Possibly, so perhaps that shouldn't be dismissed. However most photos of presumed GlaucousXVega hybrids that I've seen show birds that look very much like GlaucousXAmerican Herring Gulls. When it comes to identifying hybrid gulls, weasel words like "possible," "presumed," and "putative" are essential.

As always, comments are welcome.