Sergio and our driver (and budding bird guide) Johnny met us at the airport in Cuiaba for our midday arrival, and after a quick currency exchange we were immediately on our way towards the Transpantaneira, which is the one road in and out of the northern Pantanal. This dirt road, famous for its 122 small wooden bridges over 147 km, terminates at the Cuiaba River at a settlement called Porto Jofre. The birding can be fantastic along the road itself. More than a handful local ranches along the road have converted into full-time lodges, and other fazendas offer more rustic lodging as well. 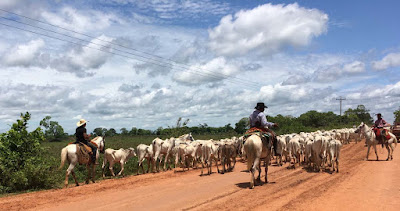 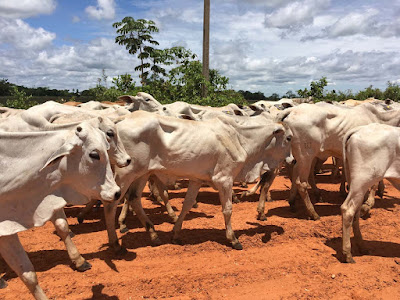 Almost immediately after pavement turned to dirt, Sergio spotted a MAGUARI STORK next to the road. Jabiru and Wood Stork are the two common storks in the region, but Maguaris can be scarce and are not guaranteed. Finding one before we were out of our plane clothes was about as good a start as we could ask for. Along that same segment of road was a stunning SCARLET-HEADED BLACKBIRD in a cecropia tree.


We arrived mid-afternoon at Pousada Piuval, where we would spend two nights.

After dropping our bags and changing out of travel clothes, we took an evening tractor ride through the flooded fields in search of wildlife. Normally one would bird the property by 4WD vehicle and on foot, but recent rains had fields flooded a bit early this year, so the tractor was necessary. 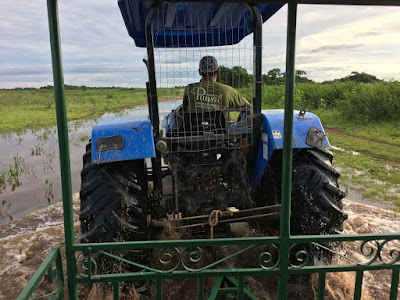 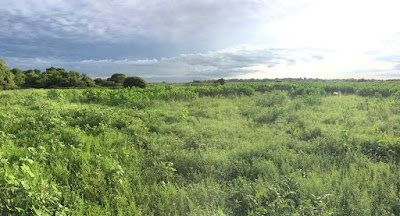 Make no mistake, the Pantanal is birdy. Diversity isn't so impressive, but numbers and visibility are. For this reason, photographers really like this place. These fields and savannahs (really, seasonal wetlands) are full of life. We began ticking new birds hot and heavy. BUFF-NECKED and PLUMBEOUS IBIS dotted the fields. Our first of just a few WHISTLING HERONS was present. I became reacquainted with one of my favorite common Pantanal birds, the GUIRA CUCKOO. The list of highlights was long...WHITE-FACED WHISTLING-DUCK, "WHITE-BACKED" STILT, many WATTLED JACANA, a flock of charismatic LARGE-BILLED TERNS, our first SUNBITTERN, egrets and herons galore, CRANE HAWK, GREAT BLACK HAWK, YELLOW-RUMPED CACIQUE, ORANGE-BACKED TROUPIAL. Lots of color, lots of size, and numbers of most species.


Along a waterway at the end of the tractor trail we turned up a couple BOAT-BILLED HERONS, and along the track itself we flushed a SOUTH AMERICAN SNIPE that was kind enough to land within view for a little while.


The sunset was spectacular (a theme here). We tallied just shy of 100 species of birds in just our first afternoon in the Pantanal. 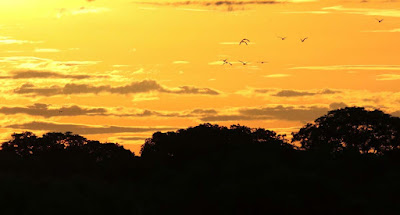 After dark we took a ride along one of the property's dirt roads and had a BAND-TAILED NIGHTHAWK, 6 COMMON PAURAQUE, a TROPICAL SCREECH-OWL and a FERRUGINOUS PYGMY-OWL.

We began with some pre-breakfast birding sprinkled with a couple of cool mammals - SOUTH AMERICAN COATI and CRAB-EATING FOX. Top avian highlight at the lodge was certainly a pair of BLUE-AND-YELLOW MACAWS. On the Transpantaneira itself, we enjoyed BARE-FACED CURASSOW, WHITE-TAILED GOLDENTHROAT (a hummingbird), several tame GRAY-COWLED WOOD-RAILS, a SAVANNA HAWK, four kingfisher species including AMERICAN PYGMY KINGFISHER, YELLOW-CHINNED SPINETAILS, and RED-CRESTED CARDINAL (uncommon here).


We took a forest walk late morning. By then, temps were climbing and the birds were quieting down. A close encounter with a group of HOODED CAPUCHINS was a treat.

The rainy season is about to begin in the Pantanal, so we were witness to some dramatic skies. Lucky for us, we had only one rain delay all week. This afternoon we had to push back our outing by an hour due to a brief deluge. IMO, a pair of duetting SUNBITTERNS stole the show as the light quickly faded. We were greeting by a young CRAB-EATING FOX upon our return to the lodge.

We would spend this morning traveling the length of the Transpantaneira, all the way to its end at Porto Jofre. It is way too easy to be distracted by wildlife along the road, which made keeping time difficult. A nice problem to have. We had first encounters with several species, including PEACH-FRONTED PARAKEET, CHESTNUT-BELLIED GUAN, ROADSIDE HAWK, PURPLE-THROATED EUPHONIA, BARRED ANTSHRIKE, CHOTOY SPINETAIL and WHITE-HEADED MARSH-TYRANT.


And then we transferred to the river boat!...