Pantanal 2018 - Life on the Cuiaba River

We boarded our house boat, the Hotel Barco Jacare, around lunchtime.  For the next five or so days, we would be on the water. We would search the rivers and tributaries for wildlife via small motor boat. Our journey would take us westward down the Cuiaba River to the Paraguay River, north to the Bolivian border. We would then double back to Porto Jofre. 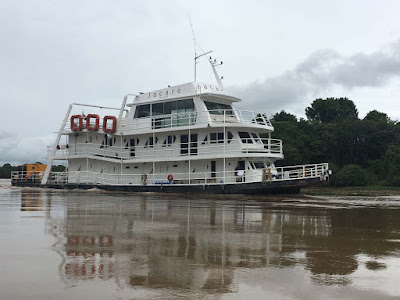 After getting acquainted with our new surroundings, we hit the river in search of Jaguars. Cruising the rivers by boat was a refreshingly comfortable way to spend an afternoon. It didn't take long before we got word that another boat had located a female JAGUAR on a nearby riverbank. We would investigate. 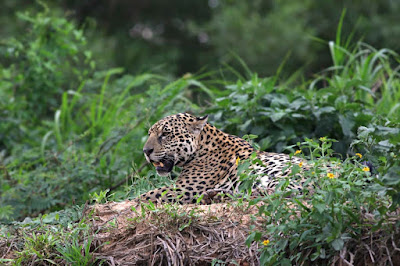 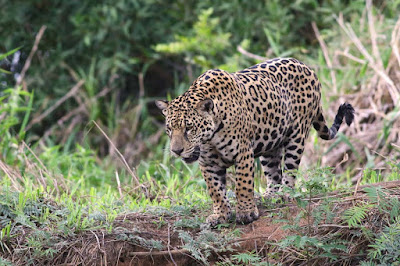 We watched this spectacular animal spend some time prowling the banks in search of a meal. We would celebrate later, appropriately, with Caipirinhas on the mother ship.

This morning's boat excursion was met by yet another awesome mammal. A typically vocal and energetic group of GIANT OTTERS entertained us for several minutes as they mercilessly chowed down on fish. Some say cute, others say demonic. What say you? 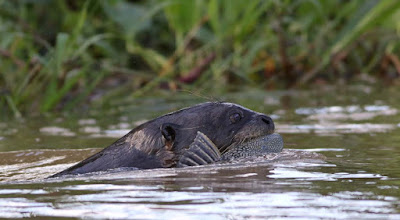 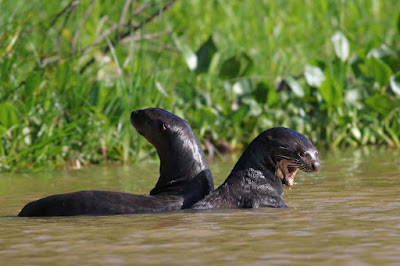 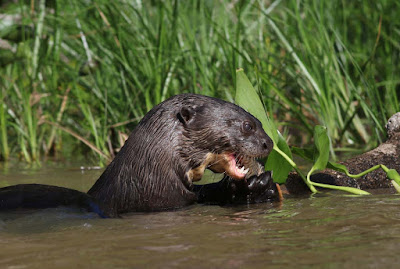 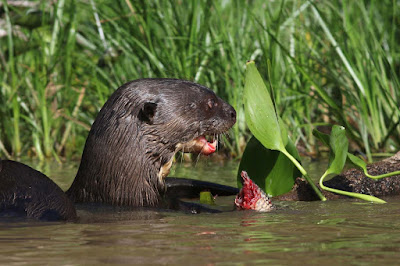 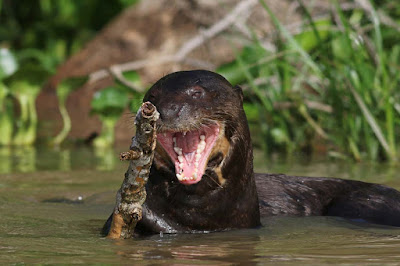 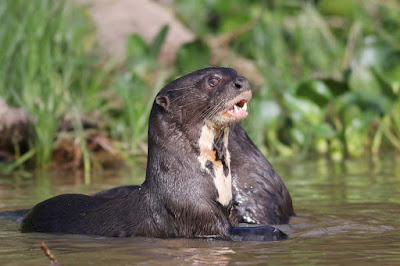 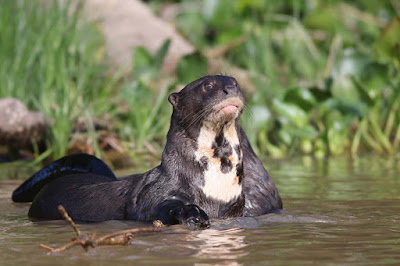 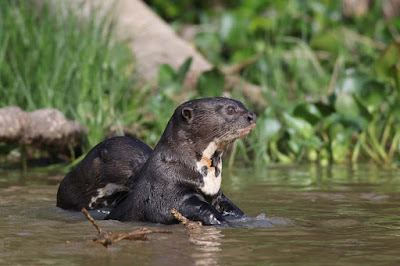 YACARE CAIMAN basked on the banks, some quite large: 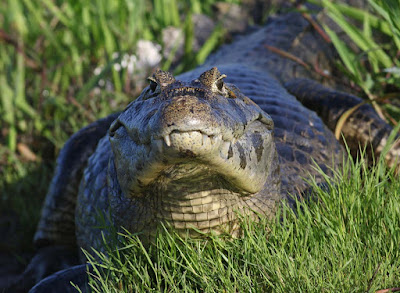 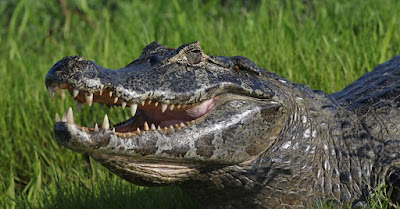 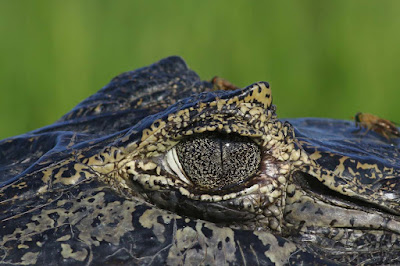 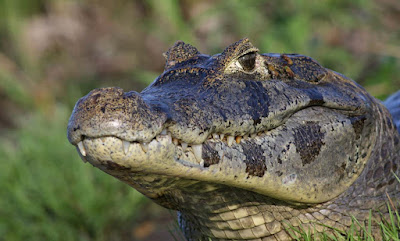 Proboscis Bats were discovered on their day roost:

Oh, there were birds, too:

Our PM boat trip was again focused on Jaguar. We were again successful, this time finding a young male that was even more active than last night's. 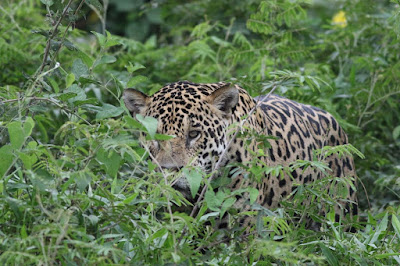 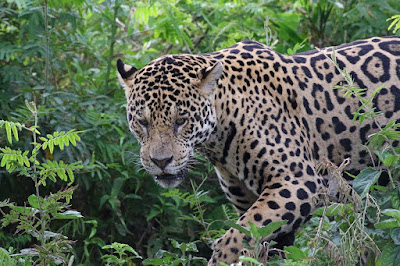 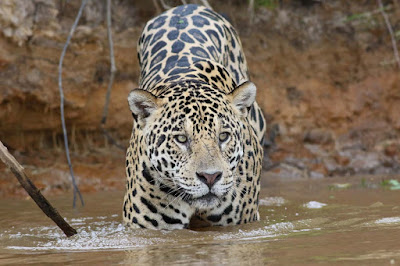 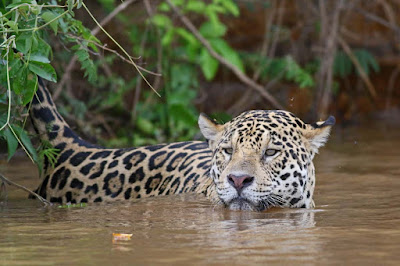 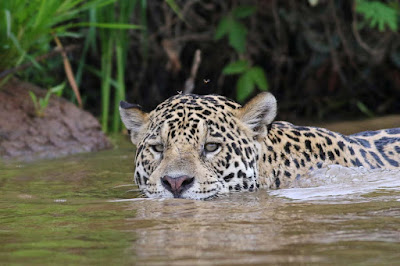 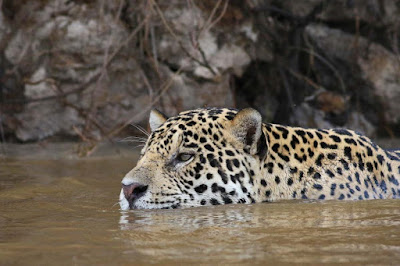 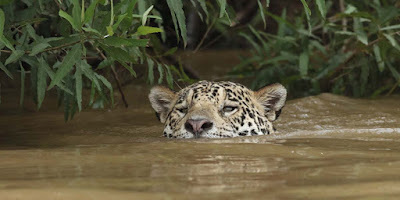 There was also plenty of jaguar food around, in the form of Capybaras. They are the world's largest rodent, the biggest of which weigh nearly 150lbs. 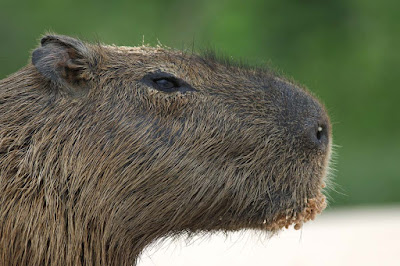 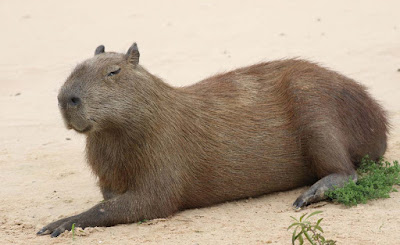 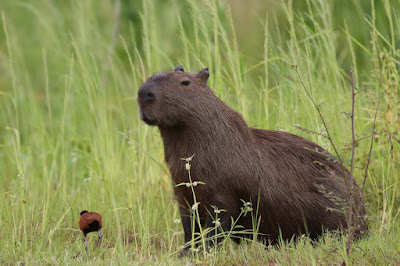 Today we began our westward journey down the Cuiaba River, to a part of the Pantanal that is very lightly birded compared to the Transpantaneira and Porto Jofre region.

This morning we explored the Cuiaba and one of its tributaries, the Negrinho (sp?). My bird of the day was a LAUGHING FALCON, a species that had previously eluded me on multiple trips throughout its range.

Among others, we particularly enjoyed an adult KING VULTURE circling over the river, GOLDEN-GREEN WOODPECKER, a singing CHIVI VIREO, and a pair of HOODED TANAGERS. 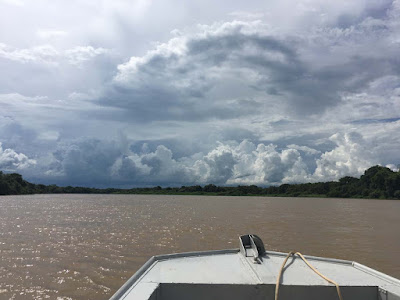 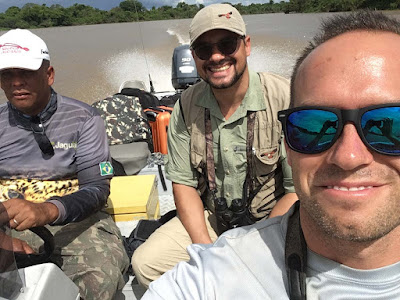 It was, of course, back to exploring the river in the afternoon. We got a bit of an earlier start thanks to overcast skies, which kept temperatures down. One particular narrow branch of the river was very productive and netted us our first SUNGREBE of the trip.


We spent sunset at an oxbow that was formerly part of the main channel of the river, but has shifted over time as flood waters build and recede annually. This particular spot was loaded with birds, especially terns by the dozen. As the light faded, we sat still and soaked up the scene in silence. 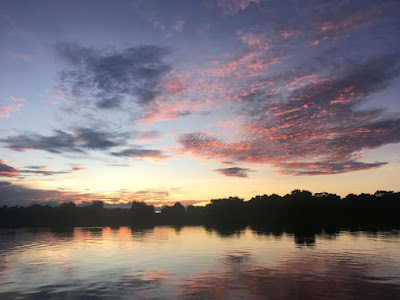