March 22, 2009
While at Milford Pt today John Oshlick and I had brief looks at an unidentified, faded first-cycle gull showing many characteristics of Thayer's Gull. I first spotted the bird slowly flying along the shore into the stiff breeze and immediately thought we had a Thayer's Gull. Easily visible were underwings like that of a white-winged gull, a perfect 'venitian blind' pattern on the primaries, a dark secondary bar, and a solid brown tail band except for pale bases to the outer rectrices. Absolutely classic-looking for Thayer's.

The bird then landed on the water with a few young Herrings. The folded primaries were chocolate-brown with neat pale finges, tertials were a bit paler and solid-centered, and the bill was black. Still looked great for Thayer's at this point.

But a couple things appeared a bit off. First, the bird was the same size as the adjacent Herrings, not discernably smaller (or larger) anyway. Structurally, it had a very "rangey" feel for a Thayer's, particularly the head/bill combo. The head was only slightly more rounded than a typical HEGU, and the bill was quite long (although a bit slimmer than nearby Herrings). The birds I have recently been comfortable calling Thayer's have averaged much more Iceland Gull-like in structure, not quite this Herring-like. I'm not so concerned about the size, given the great variability in large gull size. It's more the structure that bothers me. Is this within range of Thayer's?

It should be noted that the upperparts were quite faded and somewhat worn, as expected in mid-March, so I was not able to judge the age of the scapulars in our brief encounter.

So what is it?

So many field marks are good for Thayer's, but something feels a bit off to me. If not a Thayer's, what sort of hybrid or aberrant individual would show this suite of characters?

I would love to hear opinions on this one. Please leave a comment below, or email me directly if you'd like. 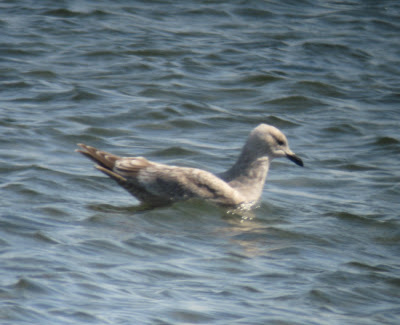 No first-cycle HEGUs present had a completely black bill like this. 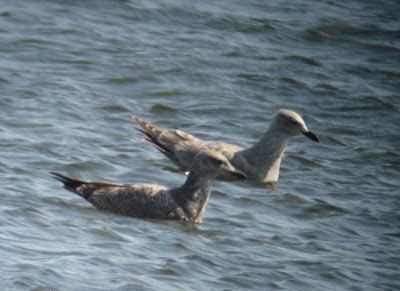 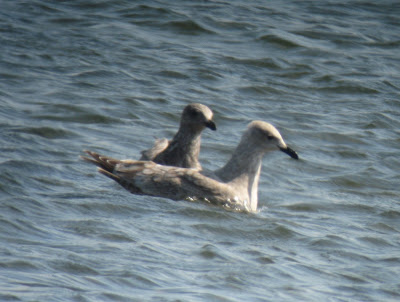 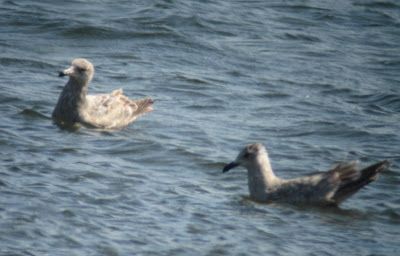 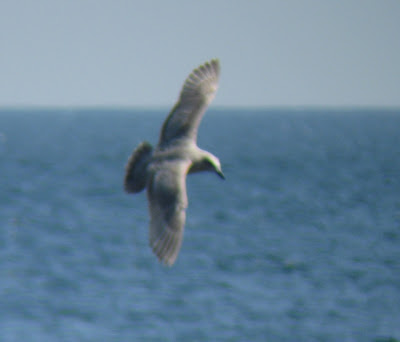 First seen in flight, we had fine looks at the primary pattern. Outer webs were dark and inner webs pale, creating the oft-discussed 'venetian blind' look. I would think that a bird with Herring Gull blood would show a more HEGU-like pattern.

I think the fading of this bird complicates its identification. Immature gulls at this time of year can be so faded and/or worn that feather-by-feather analysis becomes more difficult.

For anyone interested in looking for this bird, it was first seen along the back side of the "Piping Plover spit" and then flew out to the large sandbar in the middle of the river mouth. Thousands of gulls were present around the mouth of the river, on both the Milford and Stratford sides. There wasn't much movement offshore while I was there. Who knows what else was out there in the masses. 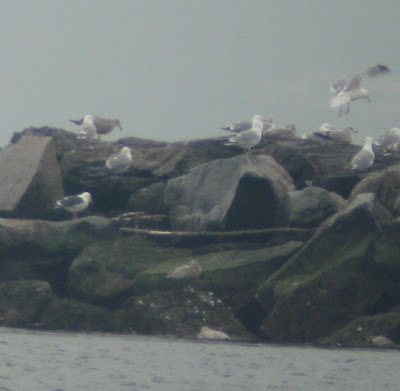 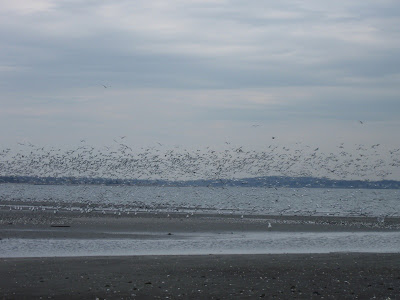 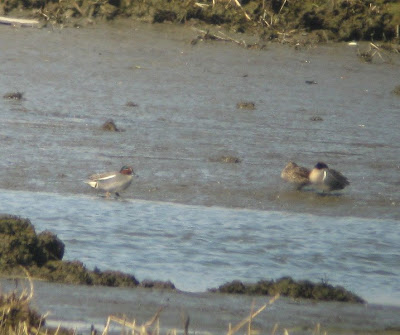 One of two drake "Eurasian" Green-winged Teal in the marsh.