May 04, 2011
We started the day with a stop at Red Rocks Park just outside Denver in hopes of catching up with the Harris's Sparrow that spent the winter at the feeders. Unfortunately we arrived to empty feeders, and we did not have any seed ourselves to throw down. We hung out for a while but the feeding station was predictably quiet. We did see four forms of Dark-eyed Junco (Slate-colored, Oregon, Pink-sided, and Gray-headed). Canyon Wrens sang from the cliffs and White-throated Swifts zipped overhead. 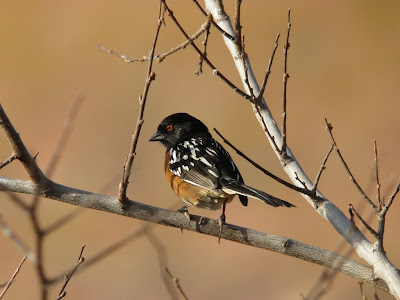 Spotted Towhee at Red Rocks Park
Our next target bird of the day was American Three-toed Woodpecker, which had been reliable at a conifer die-off west of Sedalia. After some searching Phil spotted a female 3-TOED feeding quietly just a foot off the ground. We enjoyed fantastic scope views (were able to count the bird's toes!) for quite some time until she slowly crept around the back side of the trunk. This was a life subspecies for me (P. t. fasciatus), which is noticably whiter-backed than the eastern taiga P. t. bacatus, which I had seen for the first time last summer in Maine. 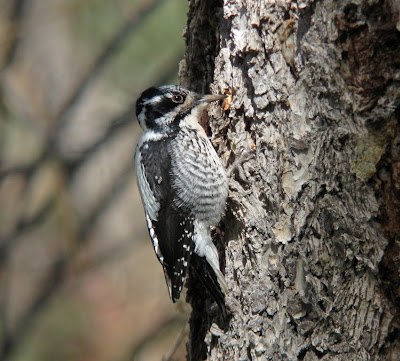 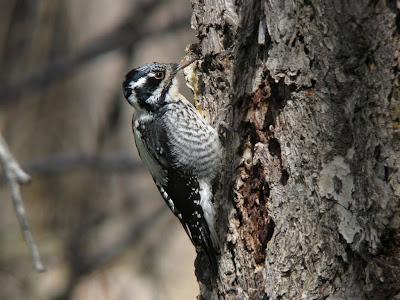 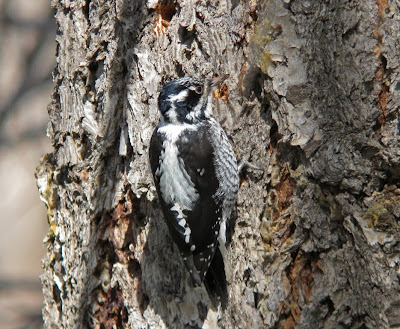 American Three-toed Woodpecker (female), subspecies fasciatus
On our way out we had a drumming male WILLIAMSON'S SAPSUCKER along the road. 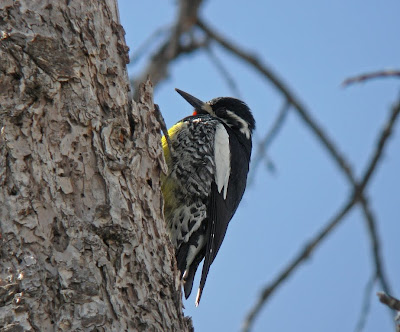 Williamson's Sapsucker
We were about to head back north through Denver but decided to stop first at Cherry Creek State Park in search of gulls. Before we found the gull flock we observed a Marbled Godwit, some White-faced Ibis, and a bunch more waterfowl including all three teal species.

We located the gull roost near the marina and started picking through them. We got on an adult LESSER BLACK-BACKED GULL first. LBBG is not a very notable species in Colorado anymore, and any dedicated winter gulling session can be expected to turn up one or more of them. I was a bit surprised to realize this while researching before the trip. To think that this European species has progressed that far west is simply amazing. It may be easier to find this species in Colorado in mid-winter than it is to find in Connecticut!

While sorting through some gulls near the marina I noticed a small immature cormorant, suspecting Neotropic based on size alone. The three of us studied the bird and confirmed the ID as NEOTROPIC CORMORANT. Bill phoned in the report and within minutes local birder Glenn Walbek was on the scene, followed by others. You can see more photos and read about the ID in my previous post. 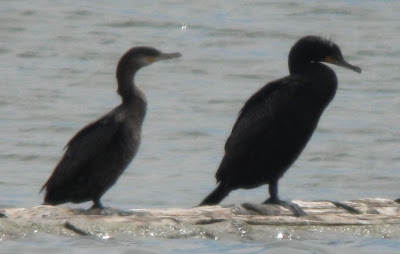 Neotropic Cormorant (left)
While watching the NECO we also stumbled across a nice first cycle THAYER'S GULL. Our stay at Cherry Creek was longer than expected thanks to the NECO, but we left with plenty of time to try for CLARK'S NUTCRACKER at Rist Canyon. We drove to the location as described on the listserv, and it only took a minute or two of looking before we heard and then saw our first. A total of three Nutcrackers teed-up for us. 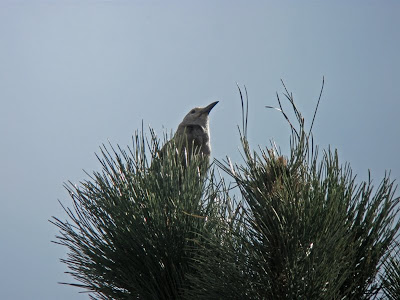 Clark's Nutcracker
We headed back south towards Boulder, where we would be spending the night. Before dark we stopped at Boulder Reservoir to see a lingering ROSS'S GOOSE, a life bird for Bill. In addition to the goose, we had a spectacular display of FRANKLIN'S GULLS as they hawked insects over the reservoir and adjacent fields. Beautiful and graceful birds, them. I'll take Franklin's over Laughing Gulls any day.