May 04, 2011
Our final day in Colorado was going to be split into two halves: morning try for Dusky Grouse with Christian Nunes and afternoon for Northern Pygmy-Owl with Scott Rashid.

We met Christian in Boulder and headed up in elevation to some open space inhabited by Dusky Grouse. The four of us hiked, often off-trail, for several hours in search of the bird. We found plenty of scat but no grouse were seen. We did hear the sound of a grouse taking flight at one point, but none of us ever got a visual. This would be our one real miss of the trip, being placed in the 'heard only' category. Despite dipping on the grouse we were treated to many singing TOWNSEND'S SOLITAIRES, all three nuthatches, Golden Eagles, and another male Williamson's Sapsucker. It was a very enjoyable morning spent hiking in the crisp mountain air with great company. We had a superb time with Christian, a Rhode Island native.

Christian came with us to Estes Park to meet Scott Rashid. Scott first took us to his most reliable pygmy-owl spot in the early afternoon in hopes that one of the pair may be active at that time. They remained elusive, so we decided to bird in Rocky Mountain National Park for a while and return for the owls at dusk. At nearby Cow Creek in RMNP the avian highlight was a male THREE-TOED WOODPECKER. Scott entertained us with his stories of mountain lions and otherwise.

We returned in the evening for the NORTHERN PYGMY-OWLS, and they did not disappoint. As the light fell the pair began calling, and the male in particular became quite active, flying from perch to perch. This was a long-awaited lifer for me, and it was a perfect way to cap such a successful trip. We again exchanged handshakes and high-fives before dropping Christian back in Boulder on our way to Denver. 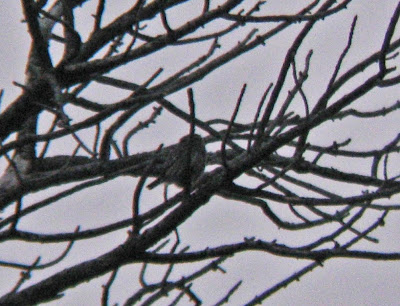 Northern Pygmy-Owl (digibinned at dusk)
The next morning we flew out of Denver at first light. Just in time too...a winter storm was bearing down on the region and snow had already begun to fall while we the plane was being de-iced on the runway. But we got off without a hitch and had an uneventful flight home.