April 17, 2014
Feb 1 - Barbados
On this day we reached our furthest point from the United States - Barbados. Not the birdiest nor the lushest of islands, Barbados still provided some really interesting species for us to see.

The island does have an endemic, the BARBADOS BULLFINCH, which we got as soon as we stepped off the cruise ship! That was easy!

Our first official stop was at a private pond that held a flock of BLACK-BELLIED WHISTLING-DUCKS and a very cooperative SCALY-NAPED PIGEON. Subsequent stops yielded ANTILLEAN CRESTED HUMMINGBIRDS, GREEN-THROATED CARIBS, SHINY COWBIRDS and a smattering of shorebirds. A cliff at the north side of the island, meant to be a bathroom stop, briefly had a CARIBBEAN MARTIN fly by, a species just starting to trickle into the Lesser Antilles in very small numbers as northbound migrants. One of the small lily-covered ponds known for harboring MASKED DUCKS came through with two males and two females - a life bird for me actually.


Our last couple stops of the day focused on the island's fascinating population of LITTLE EGRETS. Little Egret, the Old World counterpart to our Snowy Egret, was first recorded in the New World on Barbados in 1954. Little Egrets continued to arrive from across the Atlantic in small numbers, to the point where breeding actually began in 1994.

Our stop at the Chancery Lane marsh rewarded us with distant scope views of two LITTLE EGRETS (and six Snowy Egrets, for good comparison). Later, our stop at the rookery at Graeme Hall Nature Sanctuary, the site of that original 1994 colony, yielded up to five breeding LITTLE EGRETS among many Cattle Egrets and a few Snowies. We were quite a ways from the colony, so I just did the best I could with photos.


Regarding that egret at the bottom-right of the photo above...this interesting bird was paired with a typical Little Egret 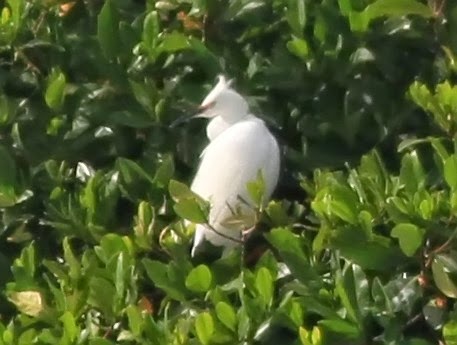 So what's going on here? I'm not sure the photos are good enough to tell. Is that bird a Little Egret, Snowy Egret, or even a hybrid? I really wish I had been in a better position to get photos. Interesting stuff though. Thoughts are welcome, as always.