November 13, 2014
We had a big push of Dark-eyed Juncos through coastal CT during the first week of November. I ran into a few impressive flocks of 100+ birds. I checked each flock carefully for odd-looking individuals as this variable species takes many forms across the continent, and vagrants from western populations are sometimes recorded.

This bird was, oddly enough, completely by itself in dune vegetation with no other juncos in sight. I noticed bright buffy flanks and a shadow of a hooded appearance, which caused me to take notice. Closer looks revealed a bird with very little dark in the buffy sides/flanks and an ambiguous hood shape (concave versus convex). There was no obvious contrast between the bird's back and head, and moderate contrast between a brown back and gray rump. 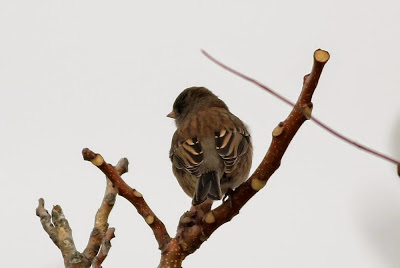 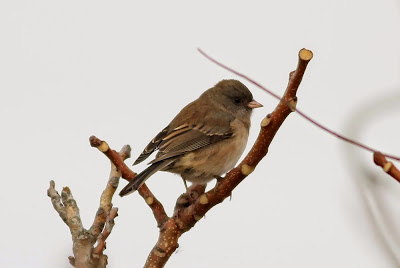 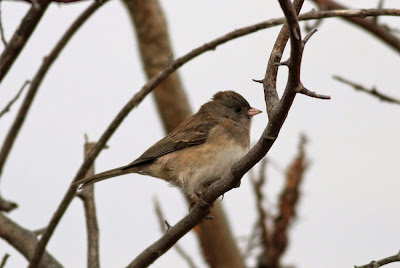 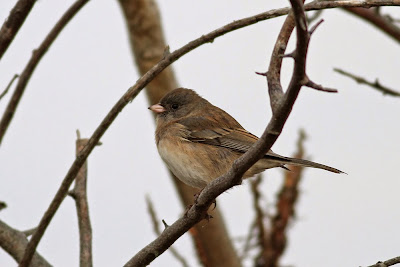 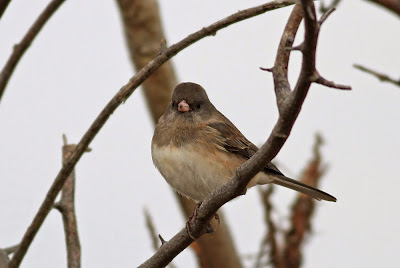 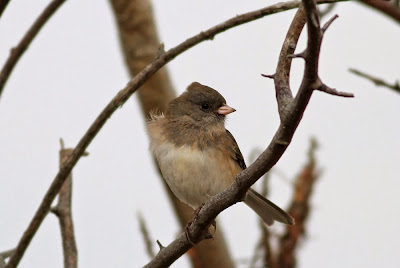 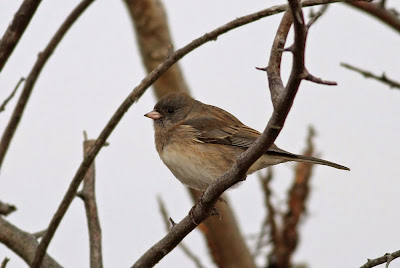 This bird stood out among a flock of well over 100 birds that were feeding on the lawns here. It showed rather warm flanks, an ambiguous bib shape, and some contrast between gray head and brown back except for a brownish crown and central nape. The flanks had a moderate amount of dark feathering. 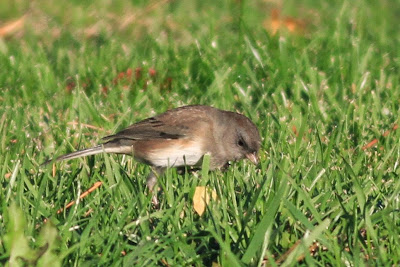 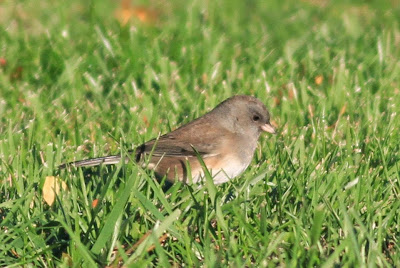 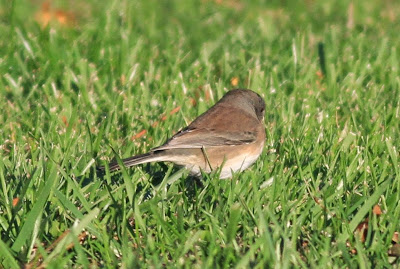 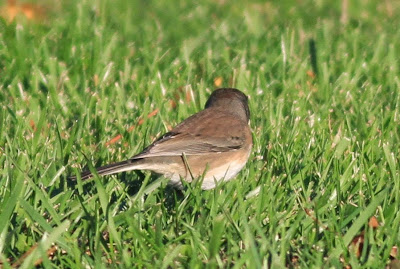 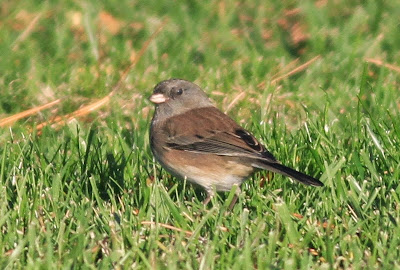 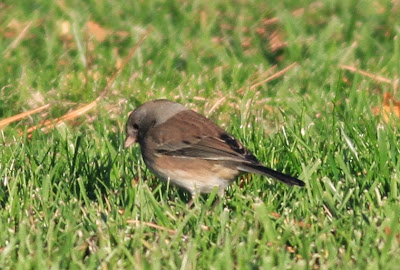 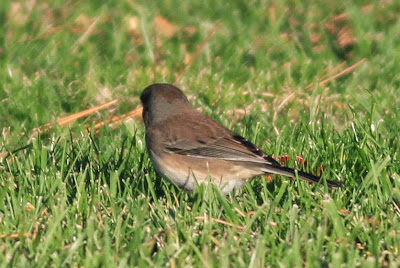 I have entered each of these birds into eBird as "Slate-colored/Cassiar" Juncos because I do not think they can be positively identified to form. They could very well be within the variation of "Slate-colored", particularly the East Shore bird. I have a tougher time believing that to be the case for the Long Beach bird, but who knows.

"Cassiar" Juncos (J. h. cismontanus) show traits intermediate between the "Oregon" Junco group (J. h. oreganus) and the easternmost "Slate-colored" taxon (J. h. hyemalis) due to gene flow. Junco taxonomy is incredibly complex and there is much we have yet to learn about the different forms and their relationships to one another. For a fascinating read, check out this ID-Frontiers thread on the subject, as archived by Angus Wilson on his website.

The third and final junco is in a different category than the first two. It shows no "Cassiar/Oregon"-like features. Instead, it shows a pale malar and chin, which are separated by a dark lateral throat stripe. Looking more closely, there is a pale supraloral spot, a hint of a pale supercilium, and even pale areas on the neck sides. These features combine to give the impression of a sparrow-like face pattern. Moving down the body, we see that the flank pattern is atypical for Dark-eyed Junco as the upper flanks are white. In the field I thought I might be seeing a few white-tipped greater coverts, but photos reveal that there are just a few thin white edges present, which appears to be an uncommon but regular feature in juncos. 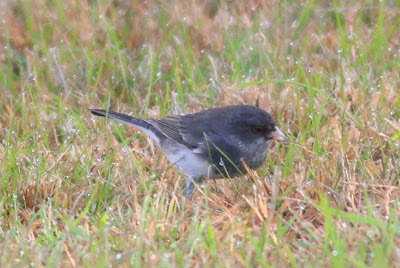 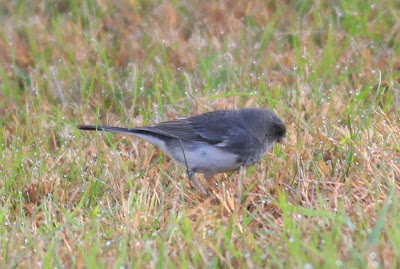 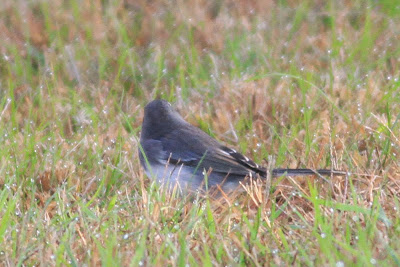 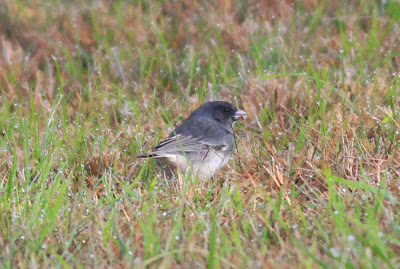 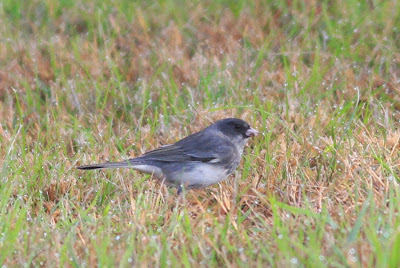 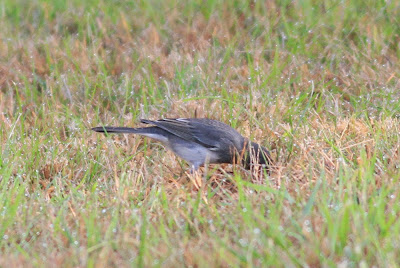 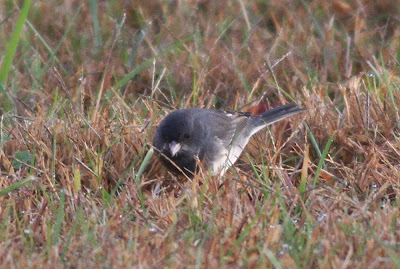 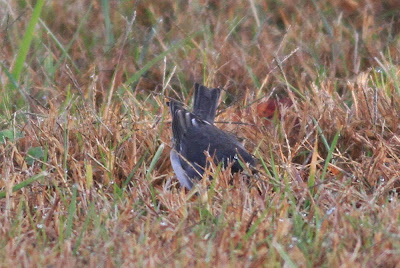 "Slate-colored" Junco is known to hybridize with White-throated Sparrow. The most obvious hybrids are intermediate in appearance between the two species. But there may be more subtle hybrids slipping by, as the probable hybrids photographed by Mark Szantyr here in Connecticut. Might this bird have some Zonotrichia albicollis genes in it? Maybe!