November 08, 2008
After a mostly unsuccessful morning of blackfishing behind the Norwalk Islands, I squeezed in some birding on the way home before dark. The first stop was the Snowy Owl found during the week by Larry Flynn. We didn't see it while we were on the boat around the islands and power plant, so I figured it had been hanging out at Calf Pasture. Sure enough, I drove up to find two crows mobbing the bird. By this point it was raining moderately and there were no other birders around. As I was leaving, the owl appeared to be preparing for a hunt...it was actively looking around, craning its neck, and even took one short flight to another jetty and back. Great looks! 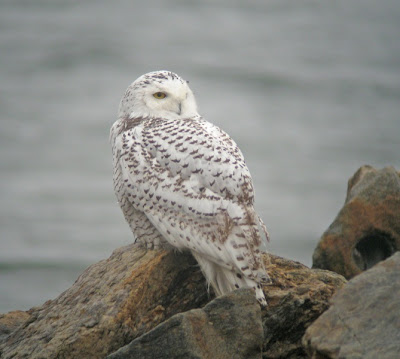 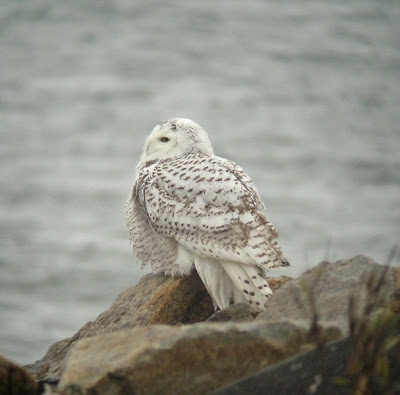 After the Norwalk Snowy I headed to Stratford to look for the flock of CAVE SWALLOWS found earlier in the afternoon by Frank Mantlik. I showed up at Long Beach just after 3pm and spent 30 minutes without spying a single swallow. As the light began to fade and the rain began to pick up again, I drove to nearby Stratford Point and was able to scope Connecticut's other currently reliable Snowy Owl. I was treated to the following spectaular view: 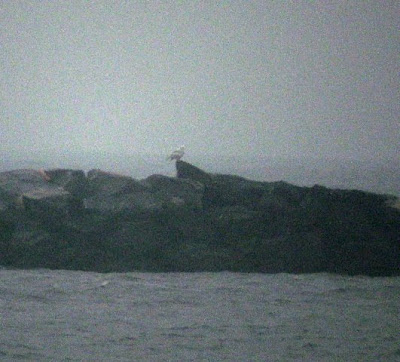 But I can't complain one bit about my first multiple Snowy Owl day in Connecticut!

Much thanks to everyone on CTBirds for updates on these great birds.