Interesting Brant in Norwalk, CT on 10/21

This BRANT (front and center) was among a flock of nearly 300 'Atlantic' Brant (Branta bernicla hrota) that were grazing on the lawns of Veterans Park in Norwalk, CT on 10/21.
Brant are comprised of multiple subspecies. Our typical eastern US subspecies is often called Atlantic Brant (B. b. hrota). Here is a summary of the Brant populations of the world:

- Atlantic Brant (hrota, in part) is the only subspecies that is expected in our eastern US region.
- Eastern High-Arctic Brant (hrota, in part) winters in Ireland. Possibly quite variable in belly darkness.
- Black Brant (nigricans) winters along the Pacific coast.
- Dark-bellied Brant (bernicla) winters in northern Europe.
- Gray-bellied Brant (not currently recognized as a distinct taxon) is a small population that winters in the Pacific Northwest. Highly variable in belly darkness.
**Note that Atlantic and Eastern High-Arctic are combined into one subspecies, hrota. Also, other populations or sub-populations may exist beyond those described here.

The subspecific identification of Brant can be quite difficult, especially when dealing with out-of-range individuals. Here in coastal New England, flocks of Atlantic Brant are quite common, particularly in spring and fall. Black Brant occurs annually as a vagrant to the east coast among flocks of Atlantic Brant. Earlier this year I located CT's first Black Brant in Stratford. The identification of Black Brant is straightforward in most cases due to its distinctly dark underparts and usually complete white necklace.

The trouble here in the East generally lies when "intermediate" birds are seen: those that appear too dark for Atlantic Brant but too pale for Black Brant. The bird in Norwalk, to my eyes, is one of these birds.

So what is it? We can take the list of populations above and eliminate a couple options. First, this bird does not appear to be one of our typical Atlantic Brant due to its dark belly. We can also eliminate Black Brant because, while the underparts are dark, they're not THAT dark. Also, its necklace is obviously broken anteriorly; the necklace of a Black Brant is usually complete. Third, the nominate Dark-bellied Brant of northern Europe can be scratched off the list of possibilities because the flank patches of that subspecies are indistinct...in my online image search I could not find a Dark-bellied Brant with a flank patch nearly as white as on the Norwalk bird.

So that leaves us with three choices:
1) a dark extreme of hrota (Eastern High-Arctic Brant, or maybe even Atlantic??)
2) Gray-bellied Brant
3) hybrid Black x Atlantic Brant
- Note that other hybrid combinations are possible, but Black x Atlantic would be the most likely scenario since Black Brants occasionally show up with Atlantic Brant on the east coast.

The identification of this bird does not appear to be possible (though I would love to be proven wrong!) given our current knowledge. For anyone interested in Brant, Mlodinow and Axelson tackle this very identification problem in an article entitled "Gray-bellied Brant: Identification and Vagrancy" in the May/June 2006 issue of the journal Birding. I used that article for much of the information in this post.

In the article Mlodinow and Axelson mention that many Brant undergo a molt-migration after the breeding season. These individuals move away from the breeding grounds to a different location where they undergo a molt before making their long journeys south. An individual of one subspecies may move to the breeding/staging area of a different subspecies to molt before fall migration. So, it is certainly possible that a Gray-bellied Brant molted with a flock of Atlantic Brant and then proceeded to migrate south with those birds and end up in Norwalk. Unlikely, but who really knows. Gun to my head, I would guess that the hybrid theory is the most likely of the three scenarios above, simply because the occasional Black Brant gets mixed up with Atlantic Brant on the east coast.

Here are some observations about the Norwalk Brant. It appeared smaller than most surrounding Atlantic Brant. Could this be a clue to its identity? Females average smaller than males, so it could be a small female. 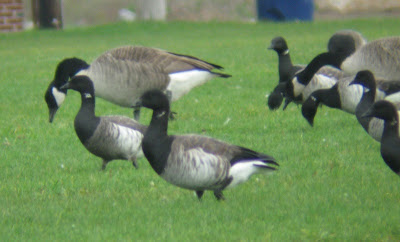 front and center, facing left
Its necklace was bright white but clearly broken centrally. Upperparts were slightly darker than the average surrounding Atlantic Brant. The black neck sock was clearly demarcated from the body, but is not as contrasting as in Atlantic Brant. The bird's belly was a medium gray-brown color that extended back between its legs. The whitish flank patch contrasted well with the dark belly. 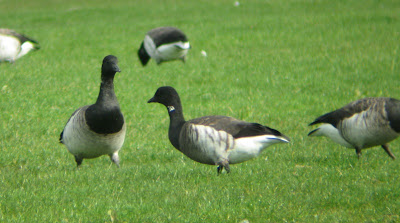 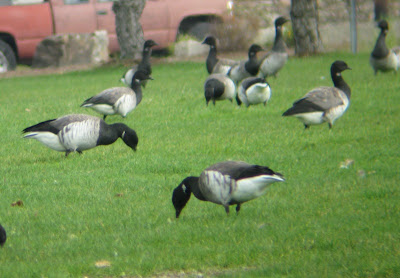 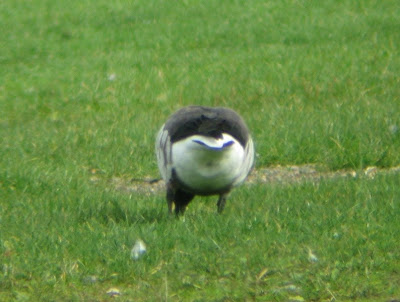 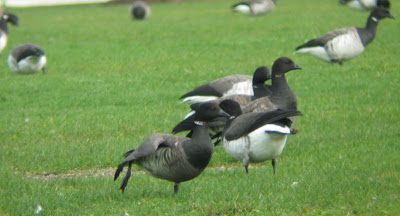 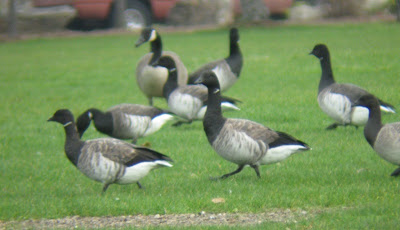 left side, bending neck down to feed
Also of note, this Brant did not show any association with a particular adult or any juvenile Brant. At this time of year family groups of geese can often be identified among large flocks because they stick together, with adults guarding their young. In the Norwalk flock many obvious family groups were present, but interestingly this bird was hanging out with many equally unattached adult Brant (which you can actually see in the photos...note the almost complete lack of young birds!).

In short, a very interesting bird. I hope to get some input from the experts. Any thoughts, comments, or corrections would be very welcome.