The fine mist from the day before had continued through the night, but was more intermittent this morning. So I headed to the Burnt Land Road at Square Lake with high hopes of finding the American Three-toed Woodpeckers that had been around for the past several weeks.

I started down the woods road and quickly had a 'che-bunk'ing Yellow-bellied Flycatcher and a Lincoln's Sparrow in full song. I proceeded very slowly, stopping every few steps to listen for woodpecker rapping and scanning the ground for Spruce Grouse. There was a good amount of birdsong from the expected species in this habitat, such as RB Nuthatch, Brown Creeper, Winter Wren, both kinglets, Swainson's and Hermit Thrushes, Nashville, Magnolia, Palm and Wilson's Warblers, White-throated Sparrows and Dark-eyed Juncos. Plus a single Boreal Chickadee.

About 1/4 mile down the road I heard my first few raps from some trees on the right. It didn't take long to locate a woodpecker just a few feet off the ground...a 3-TOED WOODPECKER. Awesome. The bird was very active and hopped from trunk to trunk, then flew across the road in front of me and began to forage right along the road. This apparent young bird gave fantastic scope views and even called a few times before moving deeper into the woods. 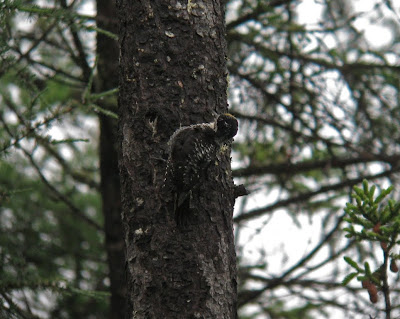 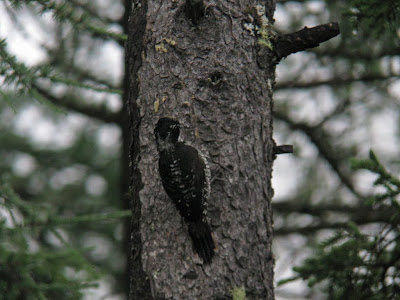 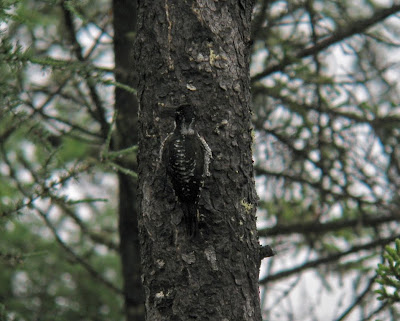 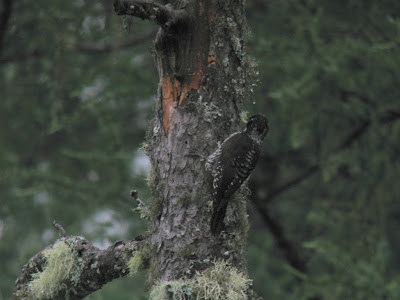 American Three-toed Woodpecker - immature bird or adult male? Note the small-ish yellow cap, and its anterior location on the head...leads me to believe this is a young bird but I would love some input.
*Update: Bill Sheehan also believes this to be a juv bird, noting the fresh plumage as well. 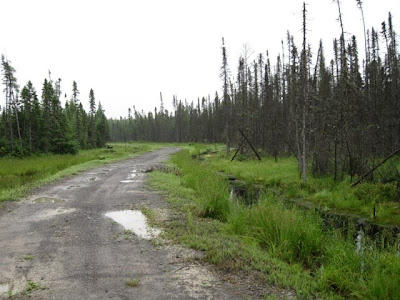 fine 3-toed Woodpecker habitat
Now that my #1 Aroostook target was in the bag, it was time to focus more on Spruce Grouse. Of my pre-trip target birds, this was the last one remaining. I continued to bird this road for a couple hours, and the birding was good. Further down the road I located another 3-toed, a brief look at a female-type bird. From here I could also hear an Olive-sided Flycatcher calling in the distance, but I was never able to get a look.

On my way back I had a few interesting ducks fly by: a female Green-winged Teal, a male Northern Shoveler, and an American Black Duck. All local breeders? 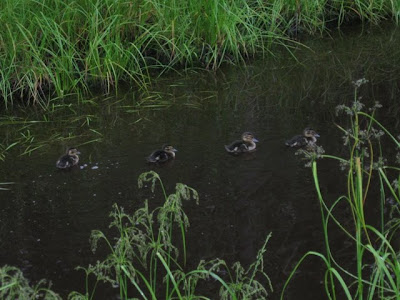 four ducklings with no parent in sight...Black Ducks??
No grouse though..

After leaving Burnt Land Road I was headed back to Caribou and decided to walk the Moscovic Road again. Again no boreal woodpeckers, and the only interesting new birds from the afternoon before were a flyby drake Common Goldeneye and a Blackburnian Warbler. 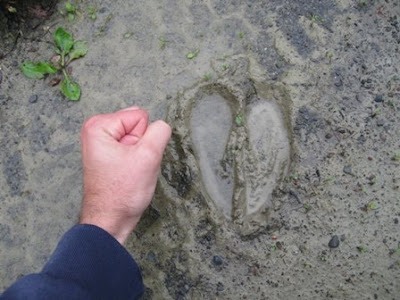 Moose tracks in the mud...they "love the slop! It's in his bloodlines! His father was a mudda, his mother was a mudda..."
While driving to the Loring Commerce Center to search for previously-reported Cape May and Mourning Warblers, the rain began to fall again. That might help explain why I missed both species, or maybe it was my late-morning timing. A flyby American Bittern in this region was a nice surprise.

After Loring, I realized I had hit all my Aroostook spots and got my big target bird. I figured that Spruce Grouse might be more likely in Baxter State Park, so I decided to head there a bit earlier than expected. And I was getting sick of the bleak weather! 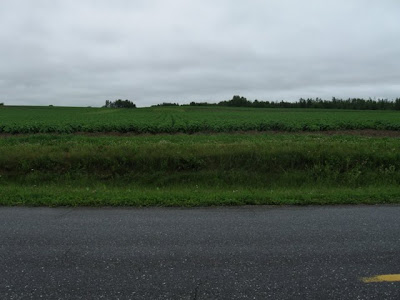 lots of farmland along the major roads in eastern Aroostook County...this is a typical view
The clouds finally began to part while heading back south on I-95. While heading toward Baxter's north entrance I spotted a grouse along the road a few miles outside the park. Given the deciduous habitat I wasn't surprised it was a Ruffed. I pulled to the side of the road while the grouse put on a bit of a show. Given the bird's behavior and occasional strange grunting noises, I suspected that young might be nearby though I never saw any. 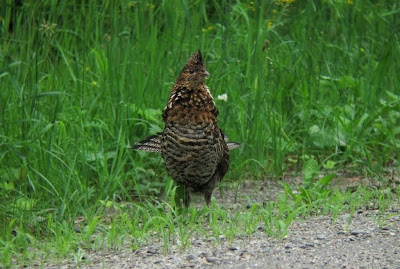 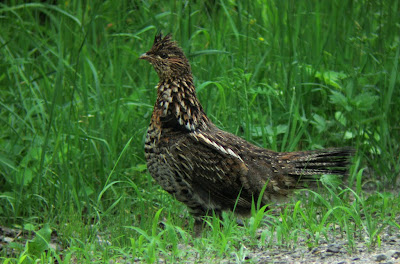 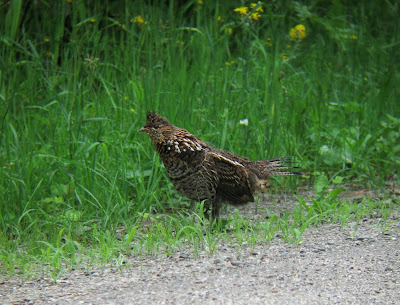 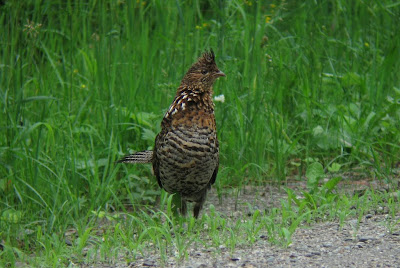 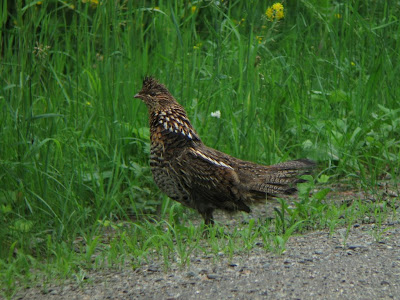 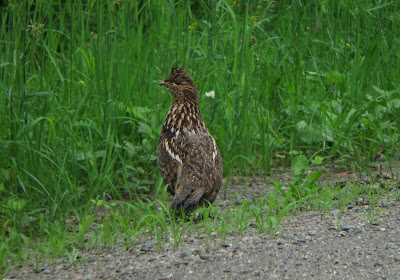 After that very cool encounter I continued into the park and headed straight toward the Spruce Grouse habitat located just north of the Nesowadnehunk Campground. I spent the next few hours birding a ~4 mile stretch of park road that runs through thick spruces/firs. 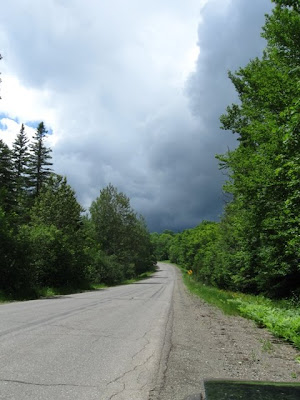 Threatening skies on the way into Baxter SP. A brief shower was followed by more sun. 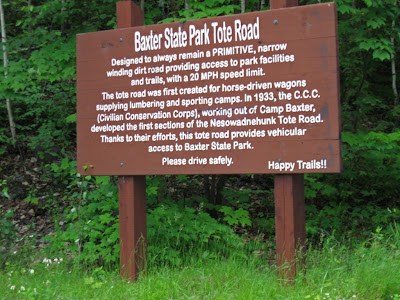 Baxter SP has one road, 40+ miles long, that runs between the north and south entrance gates. Driving though without any stopping takes over 2 hours. I can drive through Rhode Island in half that time... 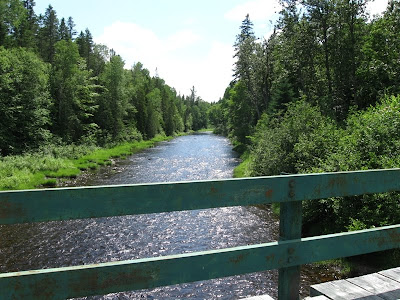 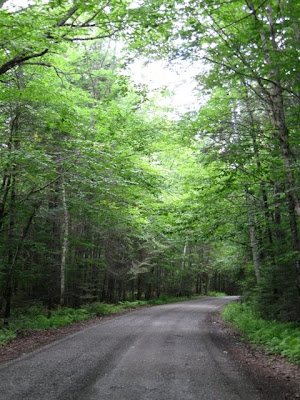 typical view along the Tote Road, which is in very good shape and easily traversed in a 2WD vehicle 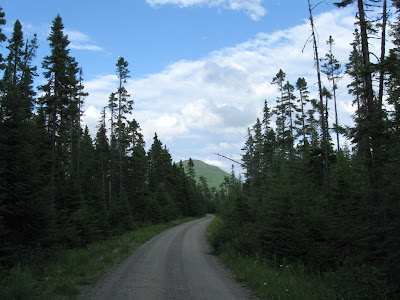 some of that boreal birds' habitat
Once again, not a hint of a Spruce Grouse in appropriate habitat after 3+ hours of searching. Not a big deal...I like a challenge, though it did worry me that I had already dipped in Lubec and Square Lake. Seeing Spruce Grouse was the impetus for making this trip north, so I wasn't about to go home without one.

Despite the mid-late afternoon timeframe, the birding was darn good here. The ringing songs of Fox Sparrows were heard several times from the road. Other highlights included superb looks at 2 male Bay-breasted Warblers over the road, another Boreal Chickadee, a flyby Pine Siskin, and many Swainson's Thrushes singing their spiraling song. 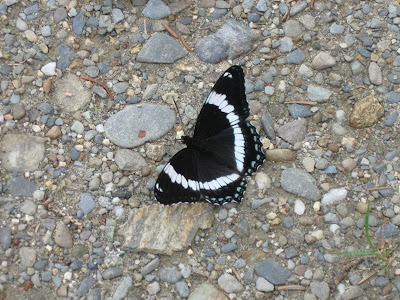 White Admirals were present by the dozens 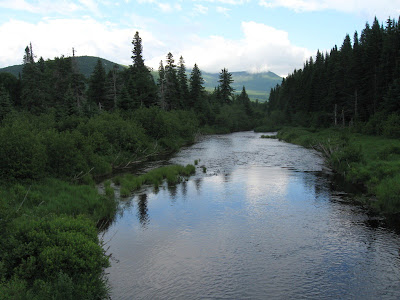 view from the Nesowadnehunk Campground 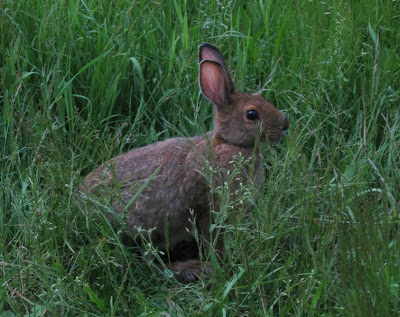 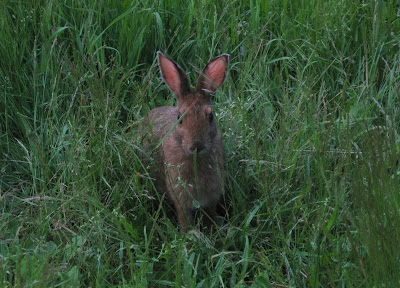