"Hawks at a Distance" by Jerry Liguori - REVIEW 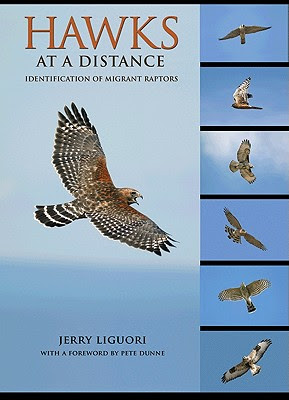 [Disclosure: Princeton University Press provided a free copy of this book for review.]

Jerry Liguori follows-up his successful “Hawks from Every Angle” with “Hawks at a Distance: Identification of Migrant Raptors.” Someone unfamiliar with raptor migration may wonder why anyone would want to make a book full of only far-away photos rather than nice close-up shots. But any birder who has spent time at a hawk watch would immediately appreciate the effort Jerry Liguori puts forth in this specialty field guide.

Only a small fraction of migrant hawks are seen from close range. Most birds are hundreds of feet in the air or wayyy out over the horizon. Some are so high that they seemingly vanish into a bright blue sky. There’s a reason why so many hawk-watchers prefer 10x binoculars (and often spotting scopes) over 7-8x bins. Ever been to a hawkwatch where the official counter is identifying hawks that literally look like dots that are miles away? That is what makes the objective of this book so appropriate.

The book begins with a nice Foreword by Pete Dunne, co-author of one of my all-time favorite guides to bird ID: “Hawks in Flight” which was published in 1987. Over a few pages Dunne goes through the history of the field guide and how they have progressed over the years, up to and beyond his “Hawks in Flight.” (By the way, pick that one up if you can find a copy and you love hawk-watching…it’s a great book to add to the library. I've read it many times.)

The Introduction describes a few key concepts to hawk-watching, particularly how structure and flight style are more useful to distant hawk ID than color and plumage. He reiterates that this book deals with identification of distant birds, and states why that is important. This is followed by a glossary of hawk-watching terminology and two labeled photos demonstrating surface anatomy. The basics of hawk-watching are explained (where, when, how, and specifics such as ideal optics, scanning techniques, and photography tips). The Intro concludes with a timetable of raptor migration, represented by a bar graph with all species represented.

The Species Accounts are where it’s at. First, each group of closely-related or similar-appearing species receive a page of text. Since the first step of distant raptor ID is narrowing your choices to a group or genus (i.e. Accipiter vs. Buteo), Liguori explains the features unique to each group. He also briefly touches on each species that makes up the group/genus. He puts the real take-home points in BOLD, which makes for easy scanning of key points (a format borrowed from the aforementioned “Hawks in Flight.”)

Each species account starts with ~1-2 pages of text that describes structure and flight style followed by plumage descriptions by age and sex. This is short and to-the-point; he packs quite a bit of information into a short space.

Then we get to the plates. There are generally 6 photos on each plate with a few lines of caption at the bottom. I am really impressed with the quality of the images; obviously these were carefully selected from a huge library of photos. Most photos were taken during fall migration, but spring photos are noted where they occur.

The photos show you how you really see the birds in the field: some are backlit, others in direct light, some against blue sky, others against clouds. All angles and common behaviors are depicted for each species. The distance of these photos really forces you to focus on structure first and general color pattern second, rather than on some of the impossible-to-see plumage details that would only be visible at point-blank range.

After the Species Accounts Liguori includes a section entitled ‘Shapes,’ which consists of a page of silhouette-like photos for each species. He includes pretty much every conceivable posture and angle. Each silhouette photo is quite small…about 40-50 of them fit onto one page! This ‘Shapes’ section includes the more common ABA-area migrants, so it excludes the rare and local species like Hook-billed Kite (still, it should be noted that the rare and local species ARE included in the Species Accounts section, in case you were wondering).

In summary, this is THE way to learn to identify migrant hawks. I highly recommend picking up this book to study before (and during!) your next hawk-watch. My old favorite "Hawks in Flight" would make a nice companion as well. The fall migration is coming up sooner than you think!