July 03, 2011
A few friends and I did some birding by boat this morning out of Norwalk, CT into Long Island Sound. The weather was great early on, with calm seas and MC skies providing a soft light over the water.

At first, there were more balloons on the water than birds. Throughout the morning we collected well over a dozen of these, which were scattered throughout the sound.

Bird activity was very low in the middle of the sound, with few feeding or even commuting birds out there. The notable exception was a single basic-plumaged adult ROYAL TERN seen flying solo from offshore Westport then crossing over to the NY side of the sound and continuing in a westward direction. The tern was flying steadily and directly without any feeding, but we were able to follow it with the boat for a few minutes, topping out over 40mph at times to catch up with the bird between stops. Nice looks!

I had borrowed my parents' Nikon D5000 with 200mm zoom lens for the morning, but unfortunately I was too busy driving the boat to snap photos. Kind of a bummer, because we did have a few photo ops!

We threw down some Menhaden oil in hopes of attracting a storm-petrel or two, but no dice. Thanks to the great viewing conditions, if there were storm-petrels in that part of the sound we would have seen them.

Heading inshore, around the islands, things were much more active. Cockenoe Island (Westport) in particular was hopping. The small Common Tern colony continues to be tightly packed with birds, my estimate being 250 in & around the colony. One first-summer COTE was noted. There were no Least Terns. The terns all seemed to be feeding right around the island itself, coming up with many sand lance; they did not have to go far to find food. A single adult LITTLE BLUE HERON was seen flying from the island toward the mainland. Nine summering LONG-TAILED DUCKS and two COMMON LOONS were in the shallows around the island. Only a few Laughing Gulls around. 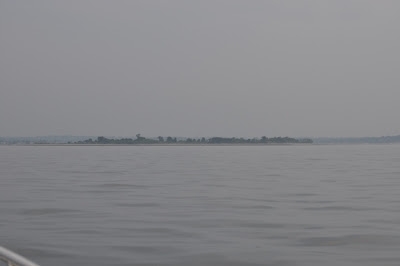 approaching Cockenoe Island from the middle of the sound 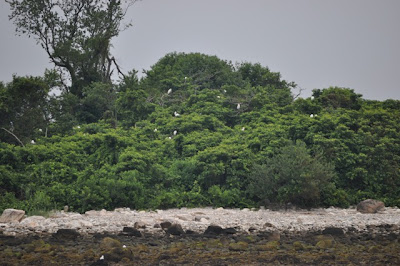 part of the island's heron rookery 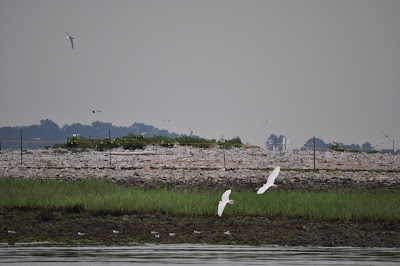 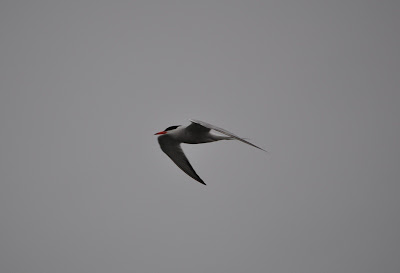 Common Tern
We also had one Diamondback Terrapin in the water on the south side of the island. A great morning to be on the water!