The tern show at the mouth of the Housatonic River continues. For the past couple weeks, a flock of Common Terns has been congregating here thanks to an abundance of Sand Lance (AKA Sand Eels). Recent rarities here have included Royal and Caspian Tern in addition to a handful of Roseates, a few Leasts, and a couple of Forster's.

Today an adult SANDWICH TERN was present, first on the Stratford side of the river mouth, later moving with the bulk of the flock to the Milford side as the tide rose. I was on the phone with Mark Szantyr talking about rarities when it first flew by (yes, he still needs it for the state :). Mark was not pleased.

The bird is an adult beginning to transition to basic plumage, with a fair amount of white speckling coming into the forehead. Easily picked out at a distance by larger size (compared to Commons), pale upperparts (like Roseate), rather slim-bodied (compared to, say, Royal) and long-winged with long black legs. The small yellow tip to the black bill vanishes into the background at a great distance, but was visible when it approached on fly-by and perched against a dark background. The bird's crest was visible most of the time even at a distance, especially so when it turned away from the oncoming breeze. 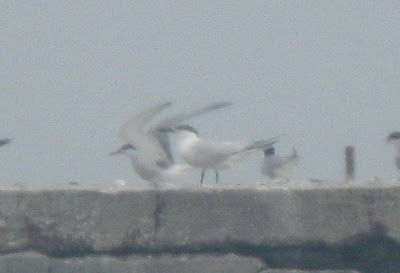 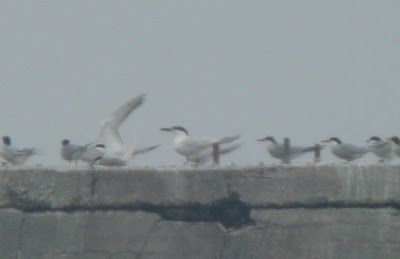 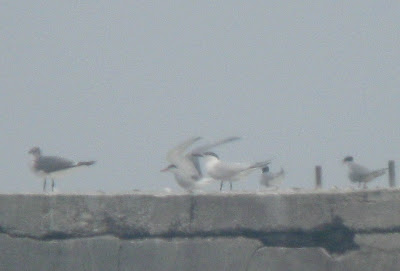 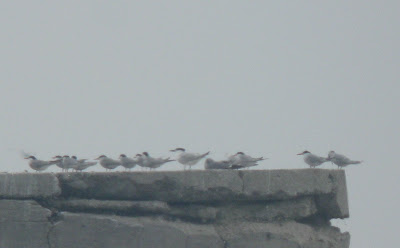 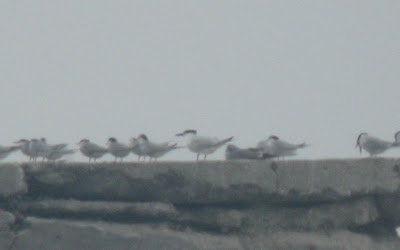 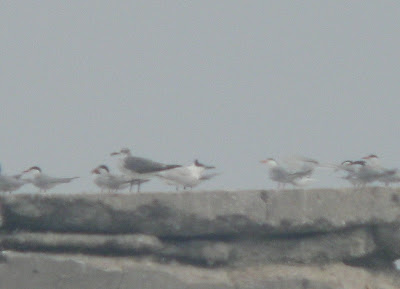 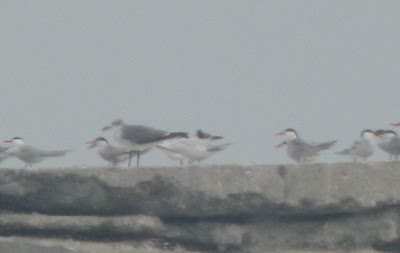 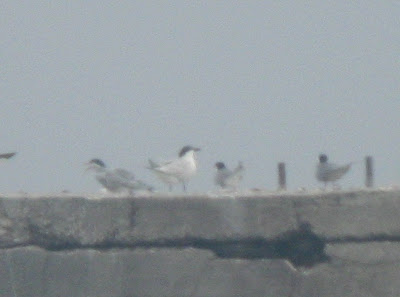 Sandwich Tern; 8 Jul 2011, Stratford/Milford, CT
This is the fifth state record, if accepted by the ARCC. The first four are as follows:

Four of the five records are from the mouth of the Housatonic River.

In addition to the Sandwich Tern, there were several hundred Common Terns, at least 4 Roseate Terns, 4 Least Terns, and 1-2 Forster's Terns.

Later in the afternoon, before the rain started, many of the terns had moved much closer to land by roosting on the sandbars at Milford Pt. In our scanning we tallied 18 first-summer and 3 second-summer Common Terns...which at least doubles my personal record for subadult COTE at one time in the state. A single fresh juvenile Common Tern was noted as well. The Forster's Tern I got a good look at was a first-summer bird.

Here's hoping the abundant sand lance continue at this location, which should keep the good terns coming through the rest of the summer.