***Nov 9 update: So nothing much came of that front around here after all. Despite Cave Swallows reaching the Great Lakes, the winds behind the front were even weaker than forecast. They only maxed out at about 10mph on Sunday. I'm guessing that's why the swallows never made it to the coast this far north. It looks like a few Caves reached Cape May, but that's about it. A few rarities
were found regionally,  but no more than most other random November weekends, I'd say!***

Original post:
Here in southern New England (and the northeast as a whole) we are in the midst of an unseasonably warm spell for early November. As is generally the case, a southwest flow is to thank. This weather tends to get birders thinking about rarities and reverse migrants at this time of year. November is rarity month, after all. 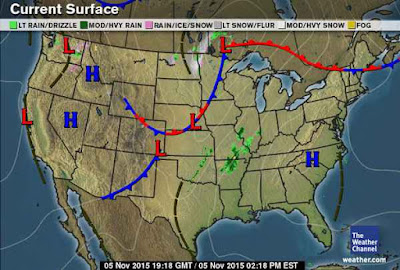 As you can see on the map above, a couple low pressure systems and associated cold fronts are currently draped across the center of the continent. Ahead of these is a warm southwest flow, and behind is a cool northwest wind. We've talked about this a bunch of times over the years, but it is worth mentioning every time. This pattern *may* bring some cool birds to our region. The idea is that birds may move with the winds ahead of the front ("reverse migrants" that go north instead of south like they should), then might also get pushed back south with the winds behind the front. This is what happens with Cave Swallows...they ride the warm southerly flow from the Texas region (presumably) to the Great Lakes region, then are pushed towards the east coast when the winds shift after frontal passage. It is a pattern that has played itself out many times over the past decade especially and is often quite predictable. The current setup is not a classic slam-dunk (the winds are not that strong nor terribly prolonged, and Cave Swallow doesn't peak until mid-late Nov), but I think it gives us a better-than-average shot at Cave Swallow.

Other species to consider? Well, rarities with a southern/western origin might be more likely to appear with this weather. For example, Ash-throated Flycatcher is a classic early November arrival under these conditions. I'm still waiting for my first CT Franklin's Gull...so how about that? I am placing my order now. Thank you.

Also thanks to the warm weather, we should expect some nice late records of neotropical migrants, whether just from lingering individuals or reverse migrants.

Shifting gears from reverse migrants to plain ol' migrants and irruptives from the north. Sunday morning should bring a strong passerine flight, and this may include some winter finches. There is reportedly a massive Common Redpoll flight underway along the St. Lawrence River in Quebec, so we could see some vanguards of that movement. The first few Bohemian Waxwings have been seen in New England. Also, there is an early movement of Snowy Owls that appears headed our way in some capacity, and the first week of November is prime time for the first of the season to reach Connecticut (and nearby).

I'm also wondering where that Cadillac Mountain Swainson's Hawk from last weekend is going to turn up next... It could still be to our north with the less-than-ideal hawk migration conditions of this week...

You should go birding this weekend.